STOWE, Vt. — The conversation about vaccine safety in the Green Mountain State was reignited over the weekend at a health seminar on non-conventional medicinal practices.

Topics at the daylong “Hope and Healing” event at Stowe Middle and High School spanned lifestyle choices, nutrition, gut health, genetically modified foods and hyperbaric oxygen therapy. However, it was the discussion of vaccine safety that garnered the most controversy, with the help of stories like this one on Buzzfeed that hyped up the debate.

PRO-CHOICE: Dr. Sherri Tenpenny, a leading advocate for informed consent when it comes to vaccine policy, visited Stowe over the weekend.

Dr. Sherri Tenpenny, a osteopathic physician based in Ohio, was one of a few well-known speakers on hand advocating for freedom of choice on vaccines. Del Bigtree, producer of the banned documentary “Vaxxed: from Cover-Up to Catastrophe,” also spoke on the topic.

Tenpenny said adverse reactions to vaccines are not only real, but routinely compensated through the Vaccine Adverse Effects Reporting System sponsored by the Centers for Disease Control and Prevention and the Food and Drug Administration.

“When I started doing this 17 years ago, there was somewhere between eight and 10 VAERS reports filed each year,” she told True North. “They now admit on their website there’s somewhere between 30,000 and 35,000 reports, and they think that’s just about 10 percent of the total injuries that are actually occurring.”

Tenpenny said more than $3.2 billion in restitution has been paid to families since 1986, the year President Ronald Reagan signed a bill granting vaccine manufacturers comprehensive immunity from lawsuits.

“(Manufacturers) have no liability. They have no reason to try and make their product any safer or any better,” Tenpenny said. “They don’t even fund the injury compensation program; the parents actually pay a sales tax on each vaccine that is administered to a child, and that tax goes in to fund the program.”

Vermont is one of many states seeking to eliminate personal freedom when it comes to vaccination decisions. In 2015, former Gov. Peter Shumlin signed legislation stripping Vermonters of the right to refuse a vaccination based on philosophical opposition.

Bigtree told True North that many people attending the event in Stowe aren’t “anti-vaccine” for wanting the freedom to make one’s own health decisions.

“This is a very broad discussion,” he said. “There are doctors here who do not believe in vaccines, and there are those who think we can do a better vaccine program — I’m in the middle. My argument is really about the freedom of choice.” 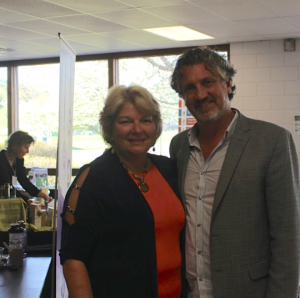 Bigtree’s film features the story of Dr. William Thompson, a scientist who alleges that the CDC has manipulated or destroyed data in a report concerning the MMR (measles, mumps, rubella) vaccine and autism. The documentary made headlines in 2016 when it was banned from the Tribeca Film Festival in New York City. It has since had showings globally, including several screenings in Vermont.

Bigtree points out that autism formerly was rare, but in past decades has increased to crisis levels. That spike, he says, shifts the burden of proof to those who say skyrocketing autism rates can’t possibly be linked to bad medicine.

For state Rep. Vicki Strong, a Republican from Albany who attended the event, the issue isn’t merely academic — it’s personal. She said one of her children developed an autoimmune disorder after getting vaccination updates in preparation for college, and a constituent in her district had a child become ill and die only days after getting a flu shot.

“I’ve been following vaccination issues for over 30 years, having had several good friends whose children had really adverse reactions to vaccines,” Strong told True North. “So raising my own children we vaccinated really carefully and almost not at all.”

At the beginning of the legislative session, Strong and 20 cosponsors introduced a bill to require the Vermont Department of Health to submit an annual summary of adverse reaction data to lawmakers for review. Since July 2016, state law has required Vermont doctors to report adverse reactions in the Vaccine Adverse Event Recording System.

She also led the fight for Vermont to keep the philosophical exemption, but said the “pharmaceutical companies were so strong” at the Statehouse that ordinary Vermonters lost the fight.

“I believe fully that our bodies are our sovereign place, that we should never have a government impose on us a certain procedure or a chemical put in our bodies, so I’ll fight for that until I die,” Strong said.

Tenpenny said while some vaccine package inserts list autism as a potential side-effect, she nevertheless advised that individuals should demand better studies and resist the temptation to point to anecdotal evidence.

“Asthma, allergies, eczema, ADD, ADHD, diabetes, autoimmune diseases, rheumatoid arthritis, negative nephrotic syndrome, things that are happening with the kidneys, all kinds of neurological problems … there are a lot of other things that have shown up in the medical literature and not a lot of people are doing a lot of studies on them.”

Bigtree said he thinks the discussion about vaccines has become too hostile.

“The fear and the vitriol — when you think about it, we’re talking about just a medical choice,” he said. “How has this conversation gotten to a place where there’s so much terror and fear? That is what the media has drummed up.”

CORRECTION: The Tribeca Film Festival is located in New York City, not Texas, as originally published.

Michael Bielawski is a reporter for True North Reports. Send news tips to bielawski82@yahoo.com and follow him on Twitter @TrueNorth82X.