MIDDLEBURY — Town Meeting Day at the Middlebury Union High School auditorium will likely be remembered by residents as a day for a changing of the guard.

On Tuesday, voters made changes to its town moderator while further embracing left-leaning politics. In particular, a majority expressed a desire for a statewide equivalent of the Democrats’ Green New Deal, which would include a ban on new fossil-fuel infrastructure and possible elimination of plastic shopping bags. 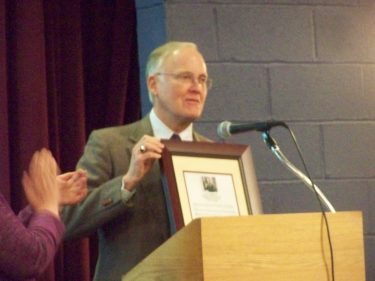 Jim Douglas, a former four-term governor of Vermont, ended his service as Middlebury’s Town Meeting Day moderator, which started in the mid-1980s.

Residents also approved $400,000 of surpluses, collected by the town’s option tax on the Cross Street Bridge, to be used to pay for several municipal infrastructure projects including improved bicycle and pedestrian access through the Exchange Street industrial park sector. The option tax, once promised by local officials to be a temporary plan, now appears to be a regular means by which to generate revenue for the municipality.

The Middlebury Selectboard honored Douglas during his last Town Meeting as moderator with a citation for outstanding public service in both local and statewide government. Selectboard Vice Chair Nick Artim praised Douglas for embodying citizen democracy in Vermont.

“This individual provides an outstanding example of what makes Middlebury special,” Artim said.

“Jim Douglas graduated in 1972 and won his first run representing Middlebury in the Statehouse. He worked as a farm hand, helped Russians transition to democracy after the fall of the Soviet Union, is an author, and later became secretary of state, state treasurer and then governor for four terms. After looking at your resume, it looks like you have a hard time holding onto jobs,” he quipped.

Humbly accepting the selectboard’s citation during sustained applaud, Douglas remarked that it was “a real privilege to serve as moderator. It’s important not to do something forever. Hopefully Susan Shashok, if elected tomorrow, will serve a third of a century, too.”

In fact, Douglas was replaced as moderator by Shashok who was elected moderator for a one-year term the next day.

After more than 30 minutes discussing Article 2, Middlebury residents voiced approval to authorize the Selectboard to apply $400,000 from the reserve fund to offset increased spending for capital improvements in the fiscal year 2020 General Fund Budget and stabilize the tax rate.

Middlebury residents attending Town Meeting were especially interested in the discussion of the town’s Article 2 proposal, which would authorize the Selectboard to apply $400,000 from the Cross Street Bridge Reserve Fund.

The reserve fund’s money is being collected via an option tax on local sales that was implemented in 2009 when work on the heavy trafficked downtown bridge — which spans the Otter Creek between Main and South Pleasant streets — was finished.

Selectboard members wanted a voice vote from residents to use the funds to offset increased spending on multiple capital improvement projects listed in the Middlebury Fiscal Year 2020 General Fund Budget and to stabilize the municipality’s tax rate.

As of last June, the Cross Street Bridge Reserve Fund had an enviable surplus of $2 million, as reported by Selectboard Chair Brian Carpenter.

Carpenter outlined that, as recently as February, the Selectboard determined that funding big in-town projects made sense by using the reserve fund’s surpluses for infrastructure improvements (such as road work, waste water facility, and pedestrian-bike ways) as well as a way to ease burdens on local taxpayers. Improvements also call for an Amtrak passenger rail platform to be built in the Marble Works across from the town’s original train depot.

“If Article 2 is approved,” Selectwoman Heather Seeley said, “the total tax rate will be reduced by 4.53 cents from 6.68 cents to 2.215 cents. The FY20 budget will depend on the grand list reappraisal to be completed in April.”

David Silverman, a Middlebury resident, expressed concerns about using bridge reserve fund money for long-term infrastructure planning coupled with a desire to use the money for tax stabilization.

Carpenter replied, “Without raising taxes, and because our (taxpayer) list has not gone up as fast, we’re looking at using some of this local option tax to do this … this is really a funding mechanism we’re looking at … for our long-term needs. Middlebury has a greater share of the services for the surrounding communities. The option tax is one of the very few taxes everybody in the greater community provides funds for. Other shire towns have option taxes; they are used for infrastructure needs, too.”

After more than 30 minutes discussing Article 2, Middlebury residents voiced approval to authorize the Selectboard to apply $400,000 from the reserve fund to offset increased spending for capital improvements in the fiscal year 2020 General Fund Budget and stabilize the tax rate.

In addition to Article 2, residents approved the following additional articles by voice vote.

Article 3 authorized the Selectboard to borrow up to $133,470 to replace a police cruiser, a dump/truck snowplow, and a pick-up truck for the Parks & Recreation Department.

Article 4 adopted the proposed budget for the Middlebury Fiscal Year 2020 in the amount of $11,155,400, with $7,436,854 to be raised by taxes. The budget requires a 2.2 percent increase in tax revenue or an increase of about 2.15 cents on the current tax rate. The actual tax rate will depend on the final Grand List after reappraisal. 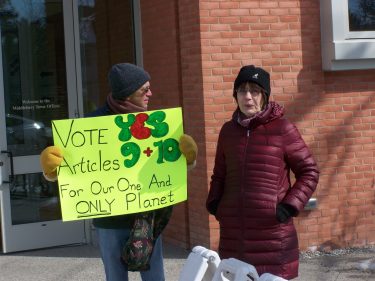 VT350 supporters of Articles 9 and 10 stood outside of Middlebury Town Offices on March 5.

Article 9, which was approved 802-237 by ballot voting on Tuesday, asked voters to advise the Selectboard to send a letter to state legislators and Gov. Phil Scott to support the 350VT Climate Solution Resolution. The resolution asks the state of Vermont to halt any new or expanded fossil fuel infrastructure ( transmission pipelines, electrical generation plants and/or industrial storage facilities); commit to 100 percent renewable energy by 2030 for all people in Vermont, with firm interim deadlines; and ensure that the transition to renewable energy is fair and equitable for all residents, with no harm to marginalized groups or rural communities. 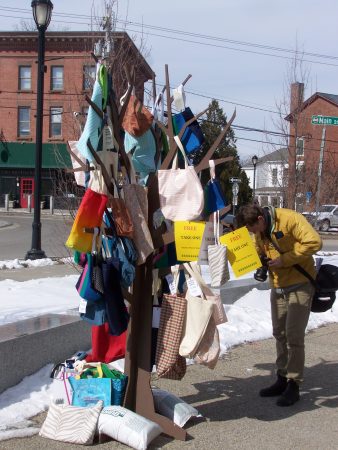 Article 10, which was approved by a 917-130 vote, advised the Selectboard to commit to protecting town lands from fossil fuel infrastructure and to deny easements or agreements for any pipelines crossing town lands. It also proposed weatherizing town buildings and schools, enlisting state support to install rooftop solar panels on town and school buildings, supporting other initiatives to improve residents’ quality of life while helping to reduce overall energy use and encouraging local landowners, municipalities, and farmers to implement practices that build the soil carbon sponge to cool the planet and mitigating flooding and drought.

It also recommended forming a Middlebury Town Energy Committee to work towards reducing town emissions and meeting the goals of the 350VT Comprehensive Energy Plan.

Article 12, which called for the encouragement of a new ordinance to ban retail single-use carry out plastic bags, was approved by a 838-211 vote.