MIDDLEBURY, Vt. — A meeting held Monday on “creating a climate economy” revealed that Middlebury residents are concerned about climate change but differ on what to do locally in response. 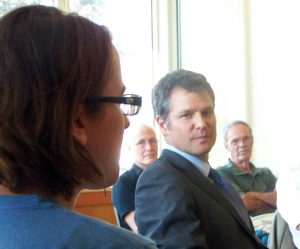 Compared to the debut of the Vermont Council on Rural Development’s Climate Economy Model Communities Program, which created a stir in Pownal two weeks ago, the second forum in the council’s series was considerably less divisive.

Some local attendees of the meetings held in Pownal since July told True North Reports that VCRD’s program isn’t accountable and comes from outside the local community.

But when it came to the council’s presentations in Middlebury on Monday, residents appeared to be united on the left-leaning politics of climate change, including the view that global warming requires responses at the local level.

But when it came to offering specific ideas about retooling an entire economy to a climate-change model, attendees sounded as confounded as Shinarian workers on a Tower of Babel ziggurat. 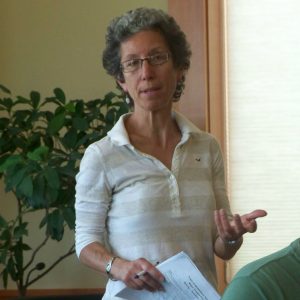 Copans thanked both Selectboard member Laura Asermily and former state Rep. Steve Maier for inviting the group to town to begin the discussion about climate change.

Among those residents who spoke, the biggest concerns at the residential level were the high cost of installing solar energy hardware and site-specific barriers, such as the cost of removing shade trees blocking solar panels.

One resident told other attendees he is planning to move in a few years and doesn’t want to make a big investment in residential solar.

Another attendee who spoke said energy conservation needed to be part of the conversation.

“There’s no sense of urgency [about climate change],” he said. “Yes, we have incentives like Efficiency Vermont, but we need more to jump start [action].” 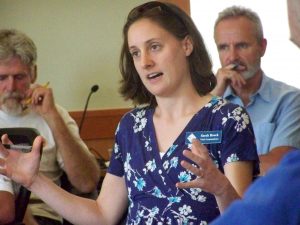 “This program has involved 23 towns in helping hundreds of Upper Valley homes switch to solar energy,” she said. “This grassroots effort doubled the number of solar homes. We also helped local solar contractors by marketing their services to residents.” 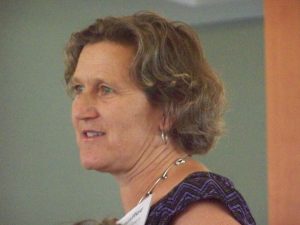 Jennifer Green, sustainability coordinator for the city of Burlington.

“We vetted several partners who agreed to offer free estimates for solar at your house,” Green said. “Burlington Electric Department screens the estimates on the homeowner’s behalf and then provides an easy-to-compare format. All of BED’s solar partners were chosen based on reputation for customer service, high quality solar technology, and production warranties and guarantees. … That’s what Solar Shopper is all about.”

Dick Thodal, a resident of Middlebury, said he’s “pro-solar” and a do-it-yourselfer when it came to installing his own alternative energy system at home.

“There’s lots of things homeowners can do on their own, starting online,” Thodal said. “For example, check out the PV Watts Calculator website of the National Renewable Energy Lab. My wife and I are in a wildlife habitat group that goes by neighbor-neighbor direct relations; I think this is the best way to go to get more folks to start using alternative energy.” 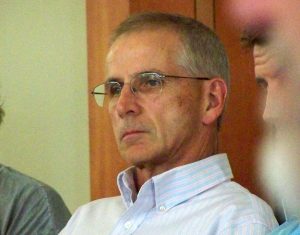 Former state Rep. Steve Maier, now a member of the board of Addison County Relocalization Network Renewable Energy Co-op, said that confronting climate change at the community level is complex and is often confusing to residents.

The former legislator expressed frustration with the current community organizing  approach, at least when it comes to promoting alternative energy use. He wondered aloud how to get more “climate change” thinking into the economic mainstream.

“It’s hard for folks to figure all this out,” Maier said. “We need to simplify how people access resources within a community to [fight climate change] on the local level. … I’m proposing that the current structure we find ourselves is limiting; it’s complex and depends on volunteers. … I’d move away from this model, but it needs to be professionally driven to make it work.”

Copans cautioned attendees that VCRD was not there to provide a “process solution” to all the myriad climate concerns, but to get local folks talking about what to do that works for them locally.

“We’re not sitting here today to come up with a structure to solve all this, but we want to hear ideas,” Copans said. “… We hope a group of people from Middlebury and surrounding areas will come together and really work on this. We’re looking for these folks to reconvene and start working.”

6 thoughts on “Middlebury residents concerned about climate change, but differ on what to do about it”