Residents of the Addison County shire town came together Oct. 26 at American Legion Post 27 for the second of several rounds of discussions as part of the Greater Middlebury Climate Economy Initiative. The initiative kicked off in town on Sept. 28 with over 100 residents in attendance. 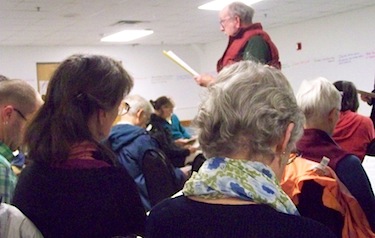 The effort, spearheaded by the Vermont Council on Rural Development, started in 2015 with the premise of going town by town to address the accumulating evidence for climate change — whether man-made or natural in cause, or a combination of both. The initiative aims to mitigate climate change through what the organization calls “innovative economic development.”

“This process is a great opportunity to think creatively about our community’s future,” said Andrea Murray, an architect and local resident.

Murray is a member of the local planning committee for the climate economy initiative.

“Hopefully people of all ages, from all parts of Middlebury and the surrounding towns, and with a variety of perspectives and experiences, will join us and add their voices to the conversation,” she said.

The meeting was the second step in the Climate Economy Initiative process. It built from the kick-off event with forums discussing topics ranging from transportation efficiency to local food and agriculture.

At the first forum, residents brainstormed 22 ideas for community improvement. The ideas ranged from electrifying school and transit buses to helping local farmers transition to organic and regenerative farming methods.

In addition, they set up a task force lead by resident Chris Huston to focus on energy efficiency and renewable energy opportunities for homes, businesses and other buildings in the community, Copans told True North Reports.

The group also decided that it was important to engage area youth in the work, with youth involvement being an overlaying priority for the task forces as they begin their work. 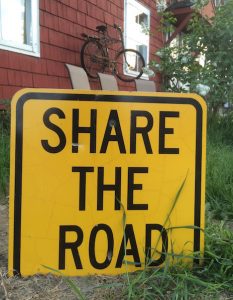 Middlebury Selectboard member Laura Asermily, who along with Murray is a member of the Greater Middlebury Climate Economy Initiative, has made biking and walking transportation one of her areas of interest in town. Asermily has been a champion for the Middlebury Bike-Ped Coalition, a grassroots forum of locals interested in improving alternative transportation options in Addison County.

Over the past month, Asermily helped bring International Walk and Roll to School activities to Middlebury schools. The effort is already contributing to part of the local Climate Economy Initiative goals.

“We reported wonderful results for the Way to Go! School Challenge and International Walk and Roll Day,” Asermily posted on the coalition’s blog last week. “We’re awaiting results of the contest (we held). Bike racks at our middle and high schools remain full. We hope we qualify to win a bike rack.”

As a key part of the effort, Asermily wants to see a task force established to make Middlebury and surrounding areas as a safer place for biking and walking.

“There is also a desire to have an over-arching vision or goal for the Greater Middlebury Climate Economy Initiative, and there was agreement that a vision statement should be developed as part of ongoing work,” Copans noted.

Task forces will now convene to work on all of these priorities. The teams will include experts that “provide advice and technical assistance to those task forces as they begin their work at the next meeting,” Copans said.

The Climate Economy Initiative is not without controversy. Some attendees of an April meeting in Pownal, Vt., voiced concerns that VCRD’s program isn’t accountable and comes from outside the local community.