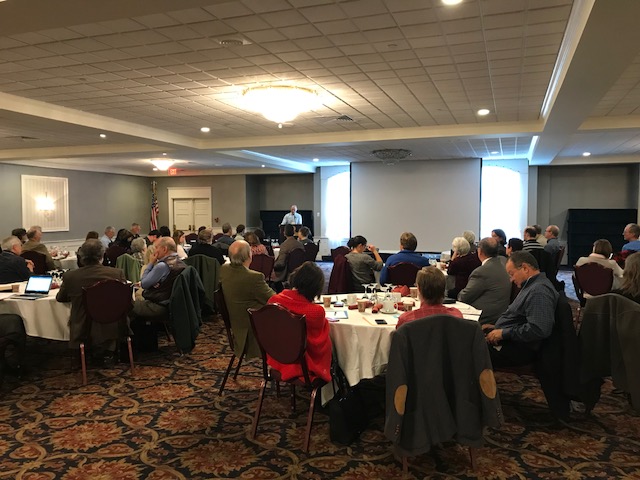 EDUCATION EQUALITY: Education leaders gathered from around the state to discuss topics ranging from Act 46 and school mergers to equity and poverty in Vermont.

MONTPELIER —  Education leaders met at the Capitol Plaza Hotel on Wednesday to discuss public education “that works for all children.” Speakers at the conference addressed equity, special needs and Act 46.

Public Assets Institute President Paul Cillo was one of the main speakers at the event.

“Education is essential to a thriving society and a thriving democracy. So, it is especially important that we make public education work for all children,” Cillo told True North.

The conference allowed a diverse group of participants engage in a balanced discussion on education, Cillo said. He added that important objectives for the day were “acknowledging the progress Vermont has made on equitable school funding,” exploring the challenges faced by children growing up with increasing poverty, and viewing rural schools and their connection to communities as “important assets.”

Equity was a constant theme throughout. John Castle, superintendent for the North Country Supervisory Union, addressed the matter in his keynote address.

NCSU is applying to the Agency of Education for “alternative district” status, which means local towns can get a pass on merging school districts in accordance with Act 46, the state’s school governance law.

One of the invited panelists, Margaret Maclean, a former Vermont principal and member of the State Board of Education, said it’s important that the state respects such applications, of which there could be many.

“What you are doing in making that application is saying, ‘We want to comply with this law but the model you suggested is preferred doesn’t do it for us, and here’s our alternative,'” she told True North.

Maclean has been a vocal opponent of Act 46.

“Unfortunately the mechanisms of Act 46 make it likely that many rural schools will close over the next ten years in Vermont,” she said. “I believe that’s a detriment to rural schools and communities and that schools are an asset the the communities. The policy is not designed to help rural schools who don’t fit the Vermont model to flourish.”

During the conference, Maclean cited a Cornell University study by Professor Tom Lyson about the costs and benefits of closing small schools. The study, which focused on rural Upstate New York, found that communities deteriorated once a small local school closed down.

Among other things, the study notes that “rural communities serve as trade and service centers for local populations. They also serve as places that nurture participation in civic and social affairs and as such can be viewed as nodes that anchor people to place.”

Another panelist, Breena Holmes, director of Maternal and Child Health at the Vermont Health Department, stressed the impact of adverse childhood experiences on a child’s early development.

She shared several charts and graphs detailing that almost half of Vermont children have adverse child or family experiences, or “ACE” events. Such ACE challenges include 27,805 children who are dealing with divorce and 18,485 kids dealing with economic hardship. About 1-in-7 children have a parent who struggles with substance abuse.

Former Hazen Union School Board Chair David Kelley noted that teachers are the people that students spend the most time with, after their parents. Even so, most teachers are not prepared to handle kids with ACE issues.

“That relationship is, I think, the most critical relationship in addressing the problems and the consequences that come with poverty,” he said. “I’m afraid in a lot of instances, teachers don’t have the professional development or the tools.

“They can teach history, calculus or biology, but they need a toolkit to deal with the issues that are coming in the classroom.”

Cillo emphasized the economic hardships that challenge Vermont families. He and others at the conference cited a correlation between poverty and school performance.

Maclean’s presentation noted that Vermont has the highest percentage of rural students in the nation, which tends to correlate with high levels of poverty.

Two solutions she discussed were “place-based learning” and “rural education collaboratives. These initatives focus on tailoring education to meet students’ surroundings and communities.”

Other speakers suggested that schools and communities need to work more as a team, such as having more farm-to-table programs and getting kids involved in community projects and civics.