By Robert Wilkie | The Daily Signal

There have been times when America has forgotten why we sent Americans overseas — and the duty we have to care for those who carry this nation’s freedom on their backs.

After Vietnam, there were no “welcome home” parades. As a youth, I saw senior officers in America’s most decorated combat division refused permission to wear their uniforms outside of Fort Bragg in North Carolina because the Army thought they would be subject to indignity.

The Vietnam War created a lasting slogan: “Never again will one generation of veterans abandon another.” That must be our charge today—and always.

Throughout the Civil War, President Abraham Lincoln would ride alongside ambulances full of wounded soldiers as they were taken to hospitals just north of the White House. 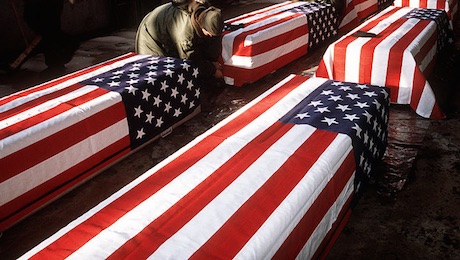 Memorial Day is for them. It is for those who have served through all of the lonely outposts in the military, at home and in distant lands, who left families and loved ones and who overcame challenges that many of us find unimaginable, and made the ultimate sacrifice.

Lincoln constantly asked, “How are things going? What are you seeing?” In those days, the weary president was constantly looking for ways to honor and to respect those who carried the nation’s future on their bayonets.

The president knew that if we were going to have a nation at all, it would be these men who would deliver our future. In 1864, he thanked the 189th New York Infantry Regiment volunteers: “To you who render the hardest work in support of this nation should be given the greatest credit.”

Generations after Lincoln wandered those lonely streets, Sgt. Alvin York reminded America what it means to revere our country and those who defend it. York was America’s greatest hero. But having returned from World War I, he was besieged by advertisers and Hollywood types begging for his endorsement so he could profit from his heroics.

He declined all of those offers as only a mountain man from eastern Tennessee could. He said, “This uniform ain’t for sale.”

Years later, as the guns of Europe began to get closer and closer to the shores of our country, York reminded Americans again why veterans fought.

President Dwight Eisenhower had it about right. A few months after he was inaugurated, he gathered 40 Korean War soldiers on the presidential yacht, the Williamsburg. Some were horribly disfigured; some were missing limbs.

Eisenhower walked among them, and he asked them to stand at attention, and those who could, did. And he said, “Your country can never compensate you for what you have given to your country. But you have a charge from me … . You never put your uniform away. You live to remind your fellow citizens why they sleep soundly at night.”

All told, more than 41 million American men and women have served during times of war, and more than 1 million have given the last full measure. And if you were to ask any of them why they did it, they would tell you it was the right thing to do.

Memorial Day is for them. It is for those who have served through all of the lonely outposts in the military, at home and in distant lands, who left families and loved ones and who overcame challenges that many of us find unimaginable, and made the ultimate sacrifice.

We must give America’s soldiers, sailors, Marines, and airmen honor, but more importantly, give them every resource available so that they are never in an even fight.

That’s our duty. It’s not to subject them to the activists of whatever liberal clerisy happens to be in the ascendancy.

The irony is that the social justice agenda ignores the basic principle of military life: Military service has been, and will always be, the great leveler in American society. The uniform brings together Americans from every corner and social stratum in the country.

America cannot treat our warriors as pawns. These Americans are fighters, not numbers.

On the evening of June 6, 1944, America’s greatest airborne warrior, Gen. Matthew Ridgway, tossed restlessly in his cot. He had already led the 82ndAirborne Division to victory in North Africa and Sicily, and then-Gen. Eisenhower tasked him with leading the airborne assault on Hitler’s fortress Europe.

Ridgway planned the operations of the 101st Airborne Screaming Eagles, the 82nd Airborne All-Americans, and the Red Devils of the British 1st Airborne Division. The great man asked for the prayer that God gave to Joshua: “I will not fail thee, nor forsake thee.”

In May 1986, as President Ronald Reagan awarded Ridgway the Presidential Medal of Freedom, he said of him: “Heroes come when they’re needed. Great men step forward when courage seems in short supply.”

Memorial Day is about great men and women and their memories that we can never forsake.

This column was adapted from a speech the author gave as VA secretary on Veterans Day 2019 at Arlington National Cemetery.

3 thoughts on “Memorial Day vow: ‘Never again will one generation of veterans abandon another’”