“The people who wrote these founding documents knew they were a lie and they knew they were committing grave hypocrisy when they wrote these words of liberty on the backs of the slave population,” Hannah-Jones claimed at a February, 2019 speech at Middlebury College.

Not surprisingly, Hannah-Jones has a love affair with socialism. She praises Cuba — police-state Cuba! — as the most egalitarian nation in the western hemisphere and says “that’s largely due to socialism.” 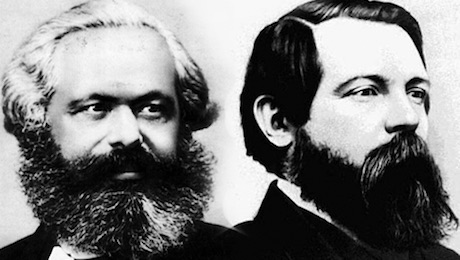 Karl Marx, left, and Friedrich Engels were co-authors of “Das Kapital,” a work published in 1867 that critiqued the capitalist system and predicted its defeat by socialism.

And it is with the cudgel of capitalism that Hannah-Jones bashes Vermont, the first state in the union to abolish slaves and the state with the most Civil War dead per capita in the Union Army. “Vermont had quite a few textile factories. Those textile factories were spinning enslaved-grown cotton,” she told the Middlebury crowd as reported by VTDigger March 1. “So we can’t really draw these neat lines around who was responsible for slavery and who was not. It really was a national endeavor.”

But if rotten founders beget a rotten system, what does that say about socialism? It’s a question mainstream media, academia, and politicians rarely ask. And when did you last hear self-professed socialist rend his/her garments over the awful racist and human rights record of their founder, Karl Marx?

This oversight is, to quote Hannah-Jones, “grave hypocrisy.” Because Marx was a world-class racist and exploiter of women and the working class, not only by the standards of Victorian England where he lived most of his adult life, but by almost any era — including possibly the Neanderthal.

Paul Johnson is a first-rate historical biographer, author of the national best-seller “The History of the Jews” and biographies on Eisenhower, Churchill, and Picasso. He tells the unblinking facts about Marx in his 1988 book, “The Intellectuals”:

“In all his researches into the iniquities of British capitalism, he [Marx] came across many instances of low-paid workers but he never succeeded in unearthing one who was paid literally no wages at all. Yet such a worker did exist, in his own household … This was Helen Demuth [the life-long family maid]. She got her keep but was paid nothing … She was a ferociously hard worker, not only cleaning and scrubbing, but managing the family budget … Marx never paid her a penny …

“In 1849-50 … [Helen] became Marx’s mistress and conceived a child … Marx refused to acknowledge his responsibility, then or ever, and flatly denied the rumors that he was the father… [The son] was put out to be fostered by a working-class family called Lewis but allowed to visit the Marx household [to see his mother]. He was, however, forbidden to use the front door and obliged to see his mother only in the kitchen.

“Marx was terrified that [the boy’s] paternity would be discovered and that this would do him fatal damage as a revolutionary leader and seer … [Marx] persuaded Engels to acknowledge [the boy] privately, as a cover story for family consumption. But [Das Kapital co-author Frederick] Engels … was not willing to take the secret to the grave. Engels died, of cancer of the throat, on 5 August 1895; unable to speak but unwilling that Eleanor [one of Marx’s daughters] should continue to think her father unsullied, he wrote on a slate: ‘Freddy [the boy’s name] is Marx’s son …

“The Jewish n—-r [here Marx uses the ‘n-word’] Lassalle … fortunately departs at the end of this week … It is now absolutely clear to me that, as both the shape of his head and his hair texture shows – he descends from the Negros who joined Moses’ flight from Egypt (unless his mother or grandmother on the paternal side hybridized with a n—-r). Now this combination of Germanness and Jewishness with a primarily Negro substance creates a strange product. The pushiness of the fellow is also n—-r -like.”