Government employees who don’t support the political activism of union leaders should not be forced to fund that activism, said demonstrators who turned out Monday at the Supreme Court building to support a free speech challenge of government-imposed union mandates.

As the Supreme Court held oral arguments inside, The Daily Signal spoke with supporters and opponents of right-to-work laws that prohibit employers and unions from entering into agreements that require workers to join unions and pay union dues. 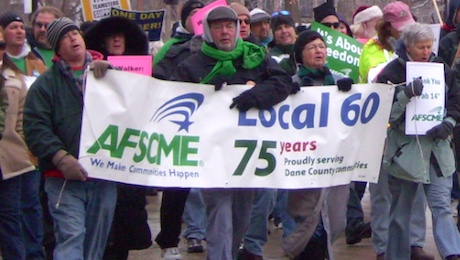 If the Supreme Court rules in favor of Janus, 5 million government workers (a number of whom are Vermont teachers and state employees) would be able to opt out of union fees and still keep their jobs.

Each side took to the microphones to make their case outside the court.

“Workers who don’t join the union are still entitled to the benefits unions win for them,” David Barrows, a former union member who lives in Washington, D.C., told The Daily Signal.

But Rebecca Friedrichs, a California elementary school teacher who was the lead plaintiff in a related Supreme Court case in 2016, sees it differently.

“Public sector unions collect billions of dollars from middle-class workers who are forced to fund a political agenda that is very much against their values,” Friedrichs told The Daily Signal. “Average Americans should know that this agenda directly affects their lives.”

However, union activists favor “agency shop” rules requiring government employees either to pay union dues as members or union fees as nonmembers. They say the rules are needed to prevent the emergence of “free riders” who benefit from collective bargaining agreements without helping to cover associated costs.

“Unions are already very weak,” Barrows,  a former member of the American Federation of State, County and Municipal Employees, said. “If the Janus plaintiffs win, this would be the coup de grace to unions.”

If a majority of justices strike down mandatory union fees in the public sector, it would mean the approximately 5 million government workers in 22 affected states no longer would be required either to join a union or pay related fees.

Mark Janus, a child support specialist employed at the Illinois Department of Healthcare and Family Services, is the lead plaintiff in the lawsuit, which challenges the constitutionality of state and local laws requiring government workers to pay the “fair share” fees to unions as a condition of employment.

Lawyers for Janus and two other Illinois state employees who joined the case are calling on the Supreme Court to overturn a 1977 ruling in Abood v. Detroit Board of Education that said public sector workers can be required to pay the fair-share, or agency, fees if they decline to join the union.

In Abood, the justices concluded that those who don’t join a union should not be permitted to operate as “free riders” who benefit from collective bargaining done on their behalf, and thus should pay fair-share fees.

But the Abood ruling also said nonunion workers should not be forced to pay for political activism they don’t support.

It’s time to overturn that decision and declare agency fees unconstitutional because they violate the First Amendment’s guarantee of free speech, the Janus plaintiffs argue in their petition to the Supreme Court. They argue that the collective bargaining process is intertwined with political activism and public policy positions they oppose.

“Right now, those 5 million workers don’t have the option to determine whether or not the union is serving their interests,” Lindsay Killen, vice president of outreach and communications for the Mackinac Center, said. “But if the court rules in favor of Janus, this would mean those 22 states will become de facto right-to-work states in the public sector.”

“They set up a club and then insist you be in it,” Norquist said. “What’s really unfair is the kind of deal that is negotiated. The individual workers have no right to negotiate for themselves.”

Larry Sand, president of the California Teachers Empowerment Network, said union leaders who complain about free riders have only themselves to blame for “rigging the rules” and pulling all workers into the collective bargaining process, including those who don’t want to join the union.

Trey Kovacs, a labor policy analyst with the Competitive Enterprise Institute, a libertarian think tank based in Washington, said he sees a possible way out.

“I find this complaint about free riders very interesting, because it’s the unions who don’t want to let go of the people who do not want to be in the union,” Kovacs said. “But there is a free market solution that maybe we can all agree on. We could have members-only unions that only represent those who are paying dues and who want to belong.”

“The Abood decision did say that these workers shouldn’t be forced to pay political activism, but when you look at what AFSCME charges them for, you will see that there is really no fine line,” Kovacs said. “If you look at charges that AFSCME has for their conventions and the causes they support, it’s impossible to enforce any rule that says these workers don’t have to fund political activism, because they do.”

A ‘Stretch’ to Say Unions Too Political?

Fred Kowal, president of the United University Professions, based at State University of New York, told The Daily Signal that it is “a stretch to say that everything unions do is political.”

Friedrichs, the California teacher who was the lead plaintiff in the case named for her, also took part in the rally outside the Supreme Court.

Strong similarities link her case with the Janus case, she told The Daily Signal.

Following the death of Justice Antonin Scalia in February 2016, the Supreme Court split 4-4 in the Friedrichs case and thus left union mandates for teachers and other government workers in place.

Ordinary Americans have a significant stake in the outcome, Friedrichs said.

“For parents who support school choice, this means the union is on the other side spending money they collect from workers to defeat these reforms,” she said.

Although “reasonable people can disagree” on the merits of public policy proposals supported by union leaders, said Akash Chougule, Americans for Prosperity’s director of policy, collective bargaining is “inherently political” since unions are lobbying the government for policy changes.

Andrew Grossman, lead attorney for the Competitive Enterprise Institute’s amicus brief in support of Janus and a partner at the law firm BakerHostetler, issued a written statement after hearing the oral arguments before the Supreme Court.

But, as Justice [Anthony] Kennedy observed, even redrawing the line won’t solve the fundamental problem that unions demand financial support so as to increase their political power. As Justice Kennedy’s questioning revealed, the only line that protects workers’ First Amendment rights is to let them choose whether or not to fund union advocacy.