Maine Republican lawmakers are urging the Legislature to reconvene to roll back Gov. Janet Mills’ requirement that health care workers be vaccinated for COVID-19, saying the mandate is forcing hospitals to ration care.

In a letter to Democratic legislative leaders, Senate Minority Leader Jeff Timberlake and House Minority Leader Kathleen Dillingham called for a special session to amend the law to allow regular testing of health care workers who decline to get vaccinated. 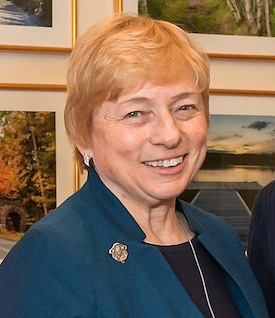 By order of Maine Gov. Janet Mills, doctors, nurses, dental workers and others in the state’s health care system now have until Oct. 29 to get vaccinated against the virus. Only medical exemptions will be allowed, not religious or philosophical.

The GOP lawmakers said they’ve spoken to hospital executives who say they are at risk from shutting down as a result of health care workers leaving their jobs over the mandate. They pointed out that the Central Maine Medical Center has suspended some pediatric and other medical services as a result of staffing shortages.

“Mainers should not be denied access to healthcare because the Governor refuses to act to keep hospital beds available,” the lawmakers said in the request.

Allowing health care workers to provide negative tests to continue working “would ensure that empty ICU beds were available to those who need them,” they said.

“It would ensure minority communities in our cities get the care they need, and protect Maine’s elderly by getting them into long term care and out of the hospital setting,” they said.

But in a fiery response, Mills ripped the request and said Republicans have “done little to advance the state’s response to COVID-19.”

“Throughout this pandemic, they have opposed nearly every public health measure proven to limit the spread of this dangerous and deadly virus,” Mills said in a statement. “Now – as Maine people continue to get sick and die – Republicans want to weaken a requirement that health care workers protect people in their care by getting vaccinated against COVID-19, the same way they have to get vaccinated against other infectious diseases.”

Under Mills’ order, doctors, nurses, dental workers and others in the state’s health care system now have until Oct. 29 to get vaccinated against the virus.

Only medical exemptions will be allowed, not religious or philosophical.

Health care facilities that do not comply with the vaccine mandate will be at risk of losing their state license, the Mills administration said.

Mills said the new rules are needed to prevent further outbreaks as the state battles a resurgence of the virus that has contributed to a rise in new infections and hospitalizations.

She said regular testing, as suggested by Republican legislators, is not an effective alternative to getting vaccinated and would not be in line with the federal health care guidelines.

“Health care workers must take every precaution to protect themselves and those they serve,” Mills said in the statement.

But Republican lawmakers said the mandate or have “devastating” consequences for the state’s health care system and will push it to the “breaking point.”

“It is not hyperbole to suggest Mainers will die as a result of the Governor’s mandate if we refuse to convene the legislature and enact a testing exemption,” they said.

But Mills fired back at those claims, accusing Republicans of spreading misinformation about the effectiveness of the vaccines.

“To say that Maine people will die as a result of expanded vaccination is repugnant, dishonest, and an insult to every Maine person who has lost their life to COVID-19, especially those who contracted the virus from a health care worker who was supposed to protect them but chose not to get vaccinated,” she said. “It is, in fact, this policy, that will keep both health care workers and their patients alive.”