As the Green Mountain State prepares for widespread mail-in voting this fall, vote-by-mail elections have already led to massive fraud in New Jersey, and Vermont’s system is experiencing early signs of trouble.

Elise Eaton, a former Vermonter who recently moved from Burlington to upstate New York, wants to know why she’s still being asked to vote in Vermont.

She moved in January, and a month later filed paperwork at the Burlington Town Clerk’s office to remove herself from Vermont’s voter checklist.

“I went in there and filled out a form when I was paying my taxes in February,” Eaton told True North in an interview Monday. “At that time, I requested and was given the form, and I filled it out and handed it back to remove my name from the voter rolls.” 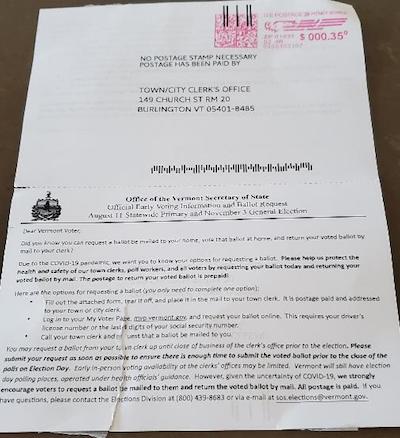 Elise Eaton, a new resident of Norwich, N.Y., wants to know why the state of Vermont sent her this card asking her to request an early absentee ballot.

However, this week she received a postcard from the Vermont Secretary of State’s Office informing her that she can request an absentee ballot by mail for the August primary election in Vermont.

“I’m troubled by it, and [troubled] to know that there are a lot of people out there who don’t think there’s any voter fraud whatsoever and don’t have a problem with mail-in or absentee. This just really supports in a very obvious way that something is not right,” she said.

The failure to keep clean voter rolls is not not the only glitch in Vermont’s election system.

Postcards sent this week reminding voters in Eden, Vt., to request absentee ballots from the Eden town office had a return address printed on them directed those mail requests to the town clerk’s office in East Montpelier, about an hour away.

Candace Vear, the town clerk in Eden, told True North she contacted the Secretary of State’s office about the matter, and was told the incorrect address on the card was the result of a printer error. It’s not known how many town residents in Eden received cards with the wrong mail-in address.

Nationally, vote-by-mail elections being advanced to reduce the spread of COVID-19 are opening the door to voter fraud. The city of Paterson, New Jersey, acknowledged a large mail-in vote fraud scandal related to a special election in May. New Jersey Attorney General Gurbir Grewal filed voter fraud charges last Thursday against two Paterson city officials accused of running a mail-in ballot scheme. More than 800 ballots, or 20 percent of all ballots, had to be discarded.

On Monday, Vermont Secretary of State Jim Condos issued a commentary explaining that Vermont will continue forward with a plan to mail ballots to every registered voter for the general election. Some of Vermont’s town clerks, however, have said there’s no way to know for certain who signs and sends in mail-in ballots.

St. Johnsbury attorney Deborah Bucknam this week told True North she is bringing a petition with 235 signatures to Gov. Phil Scott, calling on him to veto a bill on his desk that would make way for a mail-in election in November.

“We, individual citizens of Vermont, urge you to veto S.348 because the procedures it authorizes
for our upcoming elections would harm our democratic election system, violate the voting rights
of Vermont’s citizens, and divest you, Vermont’s chief executive, of your authority to faithfully
execute the laws of our state,” the petition states. “Existing election laws are time tested and incorporate significant protections that provide voters who wish to vote from home the right to do so while ensuring the integrity of elections.”

In an email to True North, Condos said his office had not received documentation that Eaton had taken herself off the voter checklist.

“Voter checklist maintenance is done by the local Boards of Civil Authority,” he said. “We have not heard from that voter, so we do not know the specifics of their circumstances.”

Regarding the massive voter fraud in New Jersey, Vermont’s secretary of state said more facts need to come out.

“We can’t comment on a local City Council race Paterson, New Jersey, as we do not have all the details and this is an ongoing investigation, and it is important to not jump to conclusions before the authorities have all the facts,” he said. “For example, saying that “1 in 5 mail-in ballots found to be fraudulent” is another conclusion leapt to without seeing any evidence first.

“Far too often these claims of voter fraud, repeated by journalists and sometimes even the President, fall apart in the end and are proved false,” he added.

According to Condos, the real voter fraud is inhibiting anyone’s ability to vote.

“The true voter fraud is to deny any eligible voter their right to cast a ballot, which is why we cannot take any chances when it comes to our upcoming elections during 2020 with COVID-19 still a very real threat,” he said.