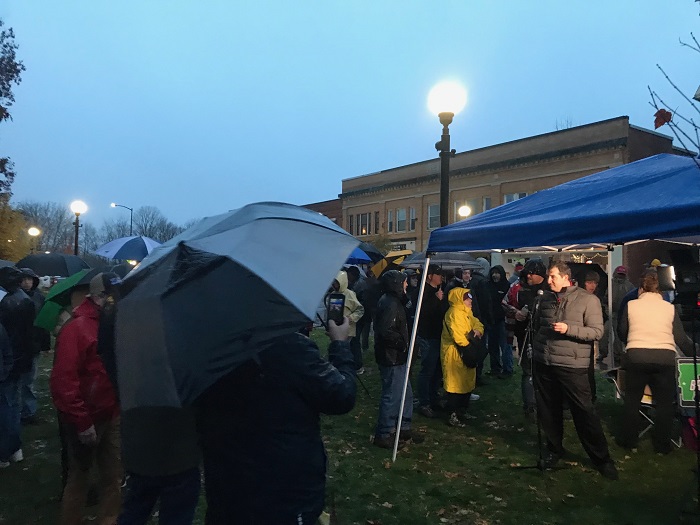 TAKING CHARGE: New state GOP Chair Paul Dame (black coat, microphone under the tent) organized one of his first events in his new leadership role, and he talked about the latest failures of the Biden presidency as well as about how opposing sides can peacefully interact.

BRANDON, Vt. — An estimated 150 Vermonters gathered in a cold, rainy town square Saturday for a “Let’s Go Brandon” event meant to gather like-minded Republicans from across the state and beyond.

“There’s a lot of frustration nationally over the way things have been going lately under President Biden,” new GOP Chair Paul Dame told the crowd. “We’re seeing huge inflation; people’s Thanksgivings are going to be more expensive than they were before.”

He discussed nationwide supply-chain issues in the economy and a disastrous end to the Afghanistan War, placing blame on the Biden administration.

It was one of Dame’s first events as leader of Vermont’s Republican Party. The town of Brandon is his hometown.

“It’s been phenomenal,” Dame told True North Reports. “There are a lot of people in the rain here, there’s got to be at least 150 or 200 people in the pouring rain. It’s all a good sign and hopefully we’re going to do good things with this.”

His main message to attendees — about 25 of which were left-wing protesters — was that folks shouldn’t get offended by the origin of the “Let’s Go Brandon” phrase. Rather, both sides should be able to have a civil discourse and then shop around and embrace the small-town rural community of Brandon.

Heather Smith, of Middleburg, said she attended in part because she’s upset with vaccine mandates, which will cause her to lose her job in the near future.

“I got emailed a policy that says if I wasn’t vaccinated by Dec. 4, I will no longer be employed, I will be put on unpaid leave,” Smith said.

She said at two Vermont hospitals, one in Rutland and the UVM Medical Center, a total of about 374 nurses and nurse assistants lost their jobs over vaccine mandates. She said what’s getting overlooked is the impact this has on the patients.

“The patients are going to be suffering,” Smith said.

Mo Shyne from Bethel shared a similar sentiment about the mandates.

“[We are experiencing] the lockdowns, the mandates, going against the Constitution upon every realm, the free speech [censorship], telling us what to do when we are supposed to be independent thinkers and should decide for ourselves, having two different positions on everything, do for me but not for thee.”

An an example of a double standard, members of Congress and President Biden’s staff are exempt from their own vaccine mandates.

Kevin Divney, of Londonderry, said he was happy to see that opposing sides could protest together peacefully.

“I’m going to go hug them later,” he said of the smaller opposing group. “More seriously, though, if you look at the elections last Tuesday, there’s serious economic stress in this country that our policymakers have underestimated.”

He said that inflation is going to continue to produce negative headlines for the president.

“The inflation is hitting [working Vermonters] hard, and those increases are forecast to increase into 2022 and 2024,” he said. “Inflation, plus wage-pressure, we could be back in the 1970s [a period of historic inflation levels].”

Throughout the event, opponents and advocates could be seen intermingling without incident. Claire Astone, who was among the smaller counter-protest, said that the ‘Let’s Go Brandon’ phrase does not represent everyone’s sentiment in the community.

“The only Brandon I care about [is the town], and this is happening in my town, and I’m here for my town, not for some BS political crap that is saying “f— Biden.” Don’t use us.”