Pro-marijuana lawmakers have sent Gov. Phil Scott a revised legalization bill ahead of next week’s veto session, but police are warning that recreational pot will bring big problems to the Green Mountain State.

While Scott has said he isn’t philosophically opposed to legalizing the recreational use of the psychoactive drug, he remains concerned about related public health and safety questions.

Among those concerns are how police authorities will accurately test for the drug when impaired motorists are pulled over, keeping marijuana out of the hands of young people, and preventing a black market of dangerous cannabis by-products.

Scott recently vetoed S.22, Vermont’s cannabis bill, sending it back to legislators to answer his concerns. While a new pot law is uncertain this year, the push for legalization by Democrats and Progressives — and even some Republicans like state Sen. Joe Benning — is not going away.

Although many lawmakers seem almost gleeful at the thought of legalized pot smoking in Vermont, law enforcement officials are expressing serious concerns.

Middlebury Police Chief Tom Hanley is among those who feel unsettled about opening the lid on pot.

“It’ll be like opening Pandora’s box,” Hanley told True North Reports. “Just look at Tiger Woods — he blew 0-0 (on an alcohol breathalyzer) yet he was still impaired.”

The golfer was arrested while driving in Florida on Memorial Day. Woods told police he was not drinking but had an unexpected reaction to prescription medications while behind the wheel.

Hanley’s disquiet stems from the current inability to accurately test for marijuana impairment. Tetrahydrocannabinol (THC), the psychoactive constituent of marijuana, remains in the bloodstream long after a cannabis high wears off.

One idea to test for THC impairment is for local police to make more use of Drug Recognition Experts, also called Drug Recognition Evaluators. DREs are trained professional law enforcement officers who can recognize impairment in drivers under the influence of drugs such as cannabis, or even prescription medications.

While it’s an inadequate system, Vermont nevertheless began its DRE effort in 2005. That effort has now expanded to 38 certified DREs pooled from state, county and municipal law enforcement agencies.

According to Hanley, when a Middlebury Police officer pulls over an impaired driver, there isn’t much he or she can do to ascertain if cannabis is involved.

“Since there’s no real standard here, it’s like we’re back in the old days,” Hanley said. “It’s up to the officer on the scene to make the evaluation of the driver based on the operation of the vehicle.”

Middlebury Police Department doesn’t use DREs, but Hanley said he hopes to have a drug expert on call soon. So far, the request hasn’t been approved by higher-ups.

Rutland County Sheriff Stephen Benard said that his deputies attend a 40-hour-long course on how to detect and collect evidence relating to drug use. The course is held at the Vermont Police Academy in Pittsford. 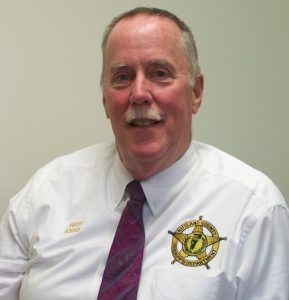 Most law enforcement officers in Vermont are in agreement when it comes to legalizing recreational marijuana: they’re against it. Rutland County Sheriff Stephen Benard said legalizing pot in the Green Mountain State is “asking for trouble.”

The training is thorough, and after the course is over, officers put the training to use with real impaired drivers. According to Benard, the officers use a variety of “clinicals” to determine impairment: odor of intoxicants, horizontal gaze, the one-leg stand, the walk-and-turn and other standard field-sobriety tests.

“If you get enough clues, since it’s number-based, it helps you determine whether they should be brought in and tested,” he said. “Then you have another test: If they’re a .08, you bring them in and process.”

But when it comes to drugged driving, things get complicated.

Last week, Benard put 11 of his team members through a two-day course called Advanced Roadside Impaired Driving Enforcement, or ARIDE. Unlike the 40-hour DUI training course, DREs must meet up with trainees at the office or at the roadside.

“The problem is, right now we have only 38 DREs in the state,” Benard said. “Nearby Rutland City has a DRE, and the Vermont State Police Rutland Barracks has one, too. So we work with both of them here in the sheriff’s department … but we’ve had occasions when we needed a DRE to help and there’s just none available. So what do we do?”

In driver impairment situations where a DRE is not available, officers must make a defensible decision on whether or not to get a blood test.

“Most of the time the decision isn’t made in a positive way,” Benard said. “Yes, the ARIDE course will help, but it’s really a roll of the dice.

“We’ve had cases when we felt that someone was under the influence of drugs and we couldn’t get a hold of a DRE; we had to let those persons go. We sure don’t want bad case law or to falsely arrest someone, so we will err on the side of caution.”

Benard says his goal is to get every municipal and county law enforcement officer in Rutland County ARIDE trained. But, he admits, it will be hard for small municipal departments such as Brandon and Castleton, which are understaffed.

The law of unintended consequences

Police will face many new challenges if recreational pot becomes legal. Benard agrees with Middlebury’s chief that legalization will be like opening the Pandora’s box of legend.

“When asked to testify in the Statehouse in Montpelier last year, I cautioned the Legislature that we’re within a five-hour drive of 80 million people,” Benard said. “So, if you pass this law, there’s stuff you haven’t even thought about.

“For example, will we have enough hospitals to take care of those law-abiding residents and tourists who will say, ‘Hey, I’m now in a recreational marijuana state; I can get high!’ But then they’ll get high, maybe become paranoid, suffer an anxiety attack, and end up in the ER. If you bring even one-tenth of those 80 million people here, will Vermont hospitals be ready for this?”

Other questions arise about what marijuana arrests will look like when Massachusetts legalizes pot in 2018, as the Bay State plans. If pot isn’t yet legal in Vermont, how will it play out when Vermonters start buying pot across state lines?

“When we visited Colorado (where pot is legal), we heard of a rather affluent guy from Texas who bought nine pounds of high-grade, hydroponically grown pot over one weekend,” Benard said. “… He shipped it all back to Texas in a UPS box where he sold it for even higher prices than where he bought it. So, how do you deal with stuff like this in Vermont? The consequences are not being thought through.”

Another problem with legalization is how homegrown pot plants will fit with other statutes. As envisioned by the Legislature, Vermonters will be permitted to possess up to an ounce of marijuana, plus two mature plants and four immature plants, starting in July 2018. This creates new legal problems for pot smokers.

“Did you know that you will have a felony issue right out-of-the-box? As soon as you harvest your plants you are committing a felony,” Benard said. “You will be able to possess up to an ounce, but anything over that is a criminal violation. One homegrown plant will produce more than an ounce, or (even) an ounce and a half of pot.”

Then there is the issue of illegal by-products. The plant matter remaining after a home-grower harvests the buds can be used to make potent honey oil and shatter — highly concentrated by-products of marijuana. These psychoactive products are likely to find their way into an illegal black market in Vermont.

Creative cannabis users have been known to pack honey oil and shatter into a PVC pipe and burn it with butane. What drips out at the other end is an amber-like material, shatter, which is 96 to 98 percent THC.

“Amber is to marijuana what crack is to cocaine — there’s just no place for it in society. You take one hit off it and you’re on the floor. We’re already seeing illegal amber and shatter in Vermont; it’s being shipped in from Colorado. It’s nasty stuff,” Benard said.

“So when marijuana becomes legal here, you still have two pounds left from your plants and then you might be tempted to butane it. A big problem in Colorado is people blowing up their kitchens using gas stoves to make shatter. It’s just nasty, nasty stuff.”

But law enforcement officials foresee an even more sobering consequence of legalization — an entire youth culture addicted to marijuana and its by-products. Recent surveys place Vermont among the top states in the nation when it comes to marijuana use by young people.

“Drugs and youth are one of Gov. Scott’s big, big concerns. Mine, too,” Benard said. “Marijuana is far more commonplace now then it was back in the 1970s, when I was in high school. Now the kids are baking it into cookies and brownies and infusing it in teas. They are in a perpetual state of being high.”

9 thoughts on “Law enforcement officials: Legalizing pot will be ‘like opening Pandora’s box’”