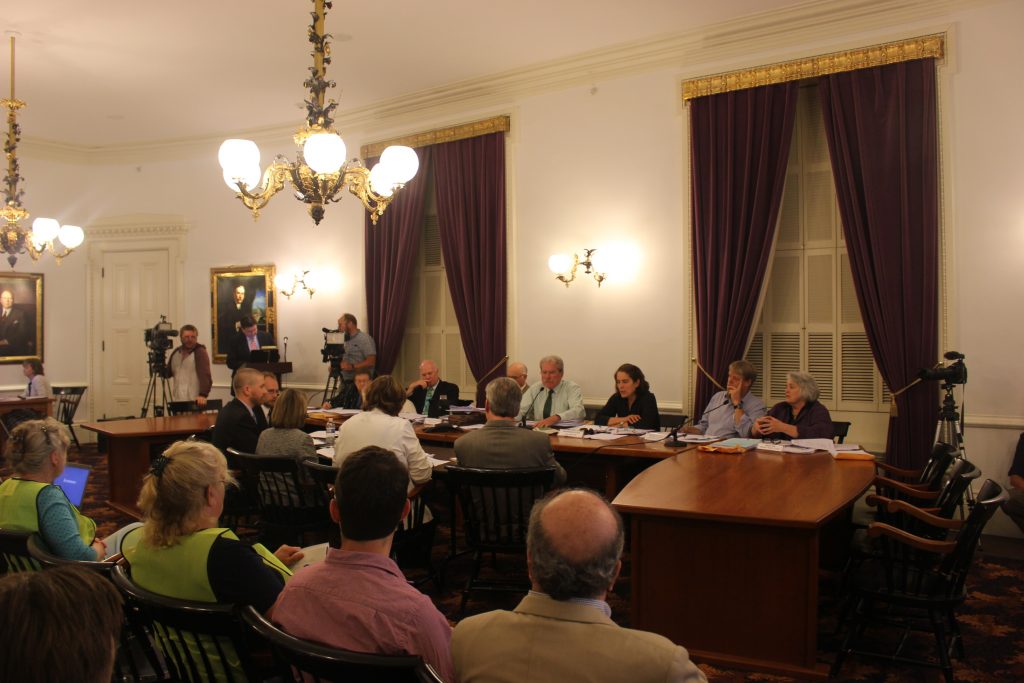 READY TO LISTEN: The Public Service Board sat before the Legislative Committee on Administrative Rules to discuss sound limits for industrial-size wind turbines.

MONTPELIER — The Legislative Committee on Administrative Rules got an earful from both sides of the wind turbine noise debate at a public hearing Thursday at the Statehouse, and members postponed making any decision on new decibel rules related to Act 174, the renewable energy siting law passed in 2016.

Supporters of wind power called the rules essentially a “ban” on any future wind energy development, whereas critics called the rules an improvement over existing standards that don’t go far enough.

Some points of the proposal include imposing a 39-decibel limit for turbine noise outside residential homes at night and a 42-decibel limit during daytime. Another rule proposes that the distance between new turbines and nearby dwellings must be at least 10 times the height of the turbine — for instance, 5,000 feet for a 500-foot-tall turbine.

Annette Smith, director of the anti-Big Wind group Vermonters for a Clean Environment, said the setback distance is a step in the right direction.

“It is the most important part of the rule because the Public Service Board is saying to the industry, ‘You’ve got to do a better job with reaching out to your neighbors and community outreach,’” she said. “And it provides the ability for people who live within that footprint to be compensated.”

The setback distance was a sticking point for supporters of Big Wind development.

“This is another area where we believe that the rules are arbitrary,” Olivia Campbell Anderson,  executive director of Renewable Energy Vermont, told the committee. “The proposed setback of 10 times the turbine’s height does not relate to regulating sound on wind projects.”

Anderson said the primary concern for developers seeking a certificate of public good should relate to meeting the decibel limits, which she said were set too low. She also took aim at those who claim large wind turbines cause health problems.

“What’s important for everyone to recognize is that more than 487 gigawatts of wind energy have been installed around the world, and we have also had a significant installment of wind here in Vermont. I think if we were facing a health crisis, that would be well documented at this point,” she said.

Another concern of Big Wind opponents is that the proposals don’t account for infrasound — sound that is not audible to humans but, nevertheless, may be felt.

“If you have not gone to listen to wind turbine noise — and I say this to the board as well — go listen to what it is that we are talking about,” Smith said. “It is not like transportation noise; it is a complex source of feelings and sensations.”

State Sen. John Rodgers, D-Essex/Orleans, had considerable influence on Act 174, the state’s siting regulations for renewable energy. Rodgers told True North that the Legislature’s intent was to have strict protections for Vermonters.

“I was on the conference committee, and it was clear that the new rules were supposed to be at least as restrictive as any existing CPG,” he said. “There are existing CPGs out there in existence that have a 30-dBA interior sound level, and I don’t believe 39 at 100 feet from a dwelling is nearly as low as 30 inside a dwelling.”

He added that the only redeeming quality about the new rules, in his view, is the setback distance of 10-times the height of the turbines. Rodgers advocated for that protection as a member of the Senate Energy Committee.

“Quite frankly, I think the setback should be larger, but I think it’s way better than nothing, which is what we have now,” he said.

Rodgers also commented on Gov. Phil Scott’s continued commitment to a moratorium on new industrial wind projects — a promise the governor made during the 2016 campaign.

“Well I guess it remains to be seen because nothing has really come through the pipeline since he’s been there,” he said. “I am still, of course, in favor of a ban or moratorium — I don’t think the things belong here. He said the same thing. I’ve worked with him for years, and he’s always been a man of his word.”

Steve Whittaker, a Montpelier resident and guest speaker at the hearing, cited the research of Cochlear Fluids Research Laboratory’s Alec Salt to make his point that infrasound is a real problem.

“It’s well known — possibly generally accepted by all parties involved here — that the large wind turbines generate noise at frequencies well below the threshold of human hearing. We can and we should continue to debate those impacts.”

AllEarth Renewables Founder and CEO David Blittersdorf recently called the new standards a “ban on wind” and doesn’t think he’ll be able to continue with any projects if these rules go through. Blittersdorf did not return True North’s request for comment.