This commentary is by Jason Snead, executive director of Honest Elections Project Action.

This week, the U.S. Supreme Court will hear a case called Moore v. Harper, and the left is having a meltdown. Vox calls the case “deranged.” Mother Jones says the Court is preparing to “rig” the next election. And Marc Elias, the Democrat’s leading election lawyer, whines continuously that the Court is about to upend democracy by embracing a “fringe” legal theory.

Just what is this “fringe” theory? Progressives call it the Independent State Legislature Theory, but most Americans have another name for it: The Constitution. All the way back in 1787, the Framers had the foresight to give the power to write the rules of federal elections to lawmakers — not courts — and that’s driving today’s litigious left crazy. 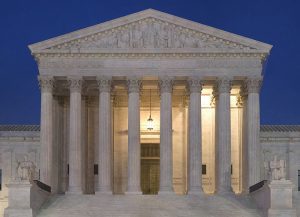 With a presidential election now just two years away, Moore v. Harper offers the Supreme Court its best opportunity to avoid chaos in future elections — and to avoid finding itself in the unenviable position of deciding another Bush v. Gore-style post-election dispute.

Queue the outrage from Elias and others. After all, if the Justices issue a constitutionally-grounded ruling in this case, their highly lucrative, nationwide campaign to use rogue courts to rewrite election laws for political gain could grind to a halt. If it does, Elias will have nobody to blame but himself.

The case arose when Elias and his clients challenged the redistricting maps drawn by North Carolina lawmakers and invited the Democrat-controlled North Carolina Supreme Court to seize the authority to draw maps for itself. The Democratic Justices did just that, treating the state constitution like a Ouija board as they grasped at any vague provision they could find to justify their power grab. In the end, the partisan majority redrew the state’s maps to advantage Democrats.

Fortunately, North Carolina legislators fired back, challenging the partisan ruling on the grounds that it violates federal law and the U.S. Constitution’s Elections Clause. That teed up the current case, which has huge ramifications for everything from redistricting to adopting voter ID.

At bottom, Moore is a case about who has the power to write election laws. When the framers crafted the Constitution, they handed that responsibility to lawmakers. The U.S. Constitution’s Elections Clause clearly states that times, places, and manners of holding elections for U.S. Senators and Representatives “shall be prescribed in each State by the Legislature thereof.”

One thing everyone should agree on is that a court is not a legislature, anymore than a legislature is a governor or a governor is a court. The difficulty, of course, is that Elias and so many progressives want courts to act as super-legislatures and impose their views — and their politics — particularly as Republicans control more and more state legislatures. But as an amicus brief by the Honest Elections Project points out, that view utterly ignores the history and text of the Constitution. Should the Supreme Court justices agree, it would deal a major blow to Elias’s anti-democracy campaign.

That makes Moore a clear threat to Elias’s anti-democracy campaign to skew voting laws for partisan gain. His cynical “voting rights” litigation is aimed at swaying election outcomes by rewriting election laws, and thanks to virtually unlimited funding from the left’s biggest dark-money outfits, he has built a 70-attorney law firm that can challenge practically any voting law in any state. In the process, he risks chaos and undermines voter confidence in elections.

Just last month, Elias went down to Georgia and scored a victory with the assistance of a handpicked activist judge who granted his request for a bonus day of voting in the contentious runoff election between Democrat Sen. Raphael Warnock and GOP challenger Herschel Walker. Elias’s gamble, which paid off, was that large Democratic counties would be the only ones with the resources to pull off an extra day of holiday voting. From start to finish, his maneuver was thoroughly partisan and drenched in hypocrisy.

Meanwhile, the most vocal critics of Moore peddle the fairy tale that legislatures would be made all-powerful, or would even be able to retroactively reverse election results. But that is simply not the case. The fact is, lawmakers will still be answerable to Congress and to the U.S. Constitution, as outlined in the Elections Clause. The laws they pass would still follow routine legal processes, such as submitting bills to governors to sign. And nothing in Moore raises the prospect of legislatures invalidating future elections extralegally and after the fact.

Doing so would, at the very least, violate federal law.

With a presidential election now just two years away, Moore offers the Supreme Court its best opportunity to avoid chaos in future elections — and to avoid finding itself in the unenviable position of deciding another Bush v. Gore-style post-election dispute. The issue will not go away, and the next time it rears its ugly head could be in the middle of a contested presidential race.

Elias, after all, will certainly be back in court coaxing activist judges to rewrite the election laws of key states for Democrats’ advantage.

In this case, anyone who loves our republic should hope for a win for North Carolina’s lawmakers. After all, Moore isn’t a case about giving them power — its about affirming the power of lawmakers to make laws. And what is more democratic than that?