U.S. Forest Service environmental regulations may see reform after a member of the Capitol Christmas Tree team in Vermont complained that burdensome rules hampered the ability to select trees from the Green Mountain National Forest.

Don Keelan, a resident of Arlington and member of the six-member team responsible for identifying trees for potential display at the nation’s capital city, wrote a commentary earlier this month criticizing federal regulations related to harvesting trees in national forests. 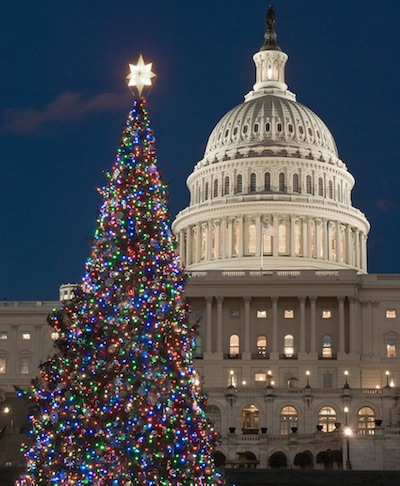 In it he reported that his crew, which delivered at least four Vermont Christmas trees in past years, “decided to abandon efforts to locate a tree” in spring 2017 due to the rules. He also wrote that the team tried but failed to get help from Vermont’s congressional delegation.

Now, a year after disbanding, Keelan and his team may have new hope of getting back to work.

On March 9, Tom Berry, a field representative for Sen. Patrick Leahy, D-Vt., wrote Keelan to say reform is on the way.

“I have certainly heard similar complaints regarding minor partnership projects within the forest over the years and your bringing this issue back to the forefront now is timely,” Berry wrote.

“The National Forest System across the country, and in Vermont are rethinking their environmental review requirements and how they interact with partners, with an eye towards a simpler and more expeditious process. This seems aimed at addressing problems exactly like the ones that you raised.”

In early 2017, Keelan and team members sent a letter to U.S. Rep. Peter Welch, D-Vt., who forwarded the complaint to the office of Sen. Patrick Leahy, D-Vt. When neither official responded, the team was forced to disband.

Berry took the blame for the breakdown in communication.

“Due to an internal miscommunication that was entirely my fault, I never got back to you with the GMNF response. For that I apologize,” Berry wrote, adding he “dropped the ball” after the team had voiced their concerns.

While the crew had more than a hundred years of combined forestry experience, members lacked certifications in CPR and chainsaw operation, which stalled the group’s effort, according to Keelan. Environmental impact studies and an archeological review added additional barriers to tree selection.

Berry’s email states that the National Forest, as well as the Green Mountain and Finger Lakes national forests, “are actively seeking stakeholder and public input at this time.”

According to the U.S. Department of Agriculture website, the new environmental analysis and decision making change effort started from a recognition that environmental analysis “is taking too long and costing too much to fully meet the agency’s obligation of caring for the land through responsible, science-based environmental stewardship and providing benefits and access to the public.”

The Forest Service agency now seeks to reduce the time and cost of environmental analysis and decisions by 10 percent in 2018. It will streamline the process another 10 percent to 20 percent in 2019 and 2020.

“They realized for some time that their process for working with partners is not as efficient as it should be,” Berry told True North. “They hosted a full-day meeting to talk with those partners to see how they can be more efficient at making decisions on activities by private groups of the forest.”

Keelan says his team welcomed Berry’s response as “very positive, constructive and right on-point,” and is grateful to have received an apology for the miscommunication. “It’s been a year since we sent the letter to them, and Tom pretty much said he was embarrassed that he dropped the ball. That’s very encouraging.”

But he added that he isn’t convinced that any real reform will come out of it. “I don’t think you’re going to change the Forest Service. To move a bureaucracy is huge, and I’ve worked with them for 55 years.”

Keelan was part of the 2007 U.S. Capitol Christmas Tree effort that in nine days took a convoy of 22 trucks and 82 people to cart the massive tree from Vermont to Washington, D.C.

But a series of events took place around June 2016 that provoked Keelan and his team to request a regulation reform in April 2017. When they discovered a few balsam fir trees that were good candidates to be the next Capitol tree, they met with the Forest Service immediately to get the ball rolling.

Keelan and his team drafted up an outline of the work they would be doing in the specified area and sent it to Manchester District Ranger David Francomb, but received no response, Keelan said.

“I sent him back a letter saying, ‘Not hearing from you, I’m assuming everything is good to go and we’ll be up there in January.’ And they got back to me immediately saying ‘you’re not good to go, there’s things you have to do now.’”

Keelan said once an agreement was finally sent to them, the original location they selected was not listed on that document. He requested to change the location before they would agree to sign. He got a response that said they would have to conduct an environmental assessment on the area, which could take even more time.

“So once we heard about that — together with the fact that one of us had to be a certified chainsaw operator, another had to be certified in CPR, and then we had to sign these agreements — we said we don’t want any part of this anymore,” Keelan said.

According to Francomb, the Forest Service gave Keelan and his crew all the tools they needed to go through with the project.

“We did a small analysis for them and we — on the decision — gave them that authority to go and do that work, and they chose not to do it,” he told True North Reports. “We issue a volunteer agreement, and that was their authorization to go do that approved work. … So Don and his group didn’t want to sign the volunteer agreement.”

Francomb added that having a chainsaw certification is a reasonable requirement if they were to use one, and Keelan and his crew received the same treatment as anyone else for that type of project.

He went on by saying that the crew requested additional acreage that they had not previously discussed before the agreement was signed, which is why that land was left out of the original agreement.

“They had asked for additional acres to be treated in areas that we didn’t discuss with them prior to that analysis that was beyond the scope of that initial decision,” Francomb said. “In explaining that and discussing what those requirements were, Don and his group just didn’t want to work with the Forest Service.”

Francomb said the agency has a minimal staff and a high volume of projects that they try their best to prioritize internally, which is why it took them so long.

“When an individual from the public reaches out to their congressional representative or senator, the Forest Service will get a call and we respond appropriately and timely, which we did in this case,” he said.

He added that as of right now nothing has been changed, but the regulation processes are currently under review to improve efficiency.

“We’re identifying areas where we might minimize or reduce the administrative burden, the processes that we work through. If we can, we are incorporating those into the work that we do,” Francomb said.

Briana Bocelli is a freelance writer for True North Reports. She lives in the Northeast Kingdom and is a senior at Castleton University. Bruce Parker contributed to this report.

Image courtesy of The Architect of the Capitol