Judging by their public statements and actions, Sen. Bernie Sanders and Rep. Peter Welch seem either unaware or unopposed to the organized, violent rioting being waged nightly in Portland by Antifa and other leftists.

However, both Sen. Patrick Leahy (D-VT) and former Gov. Howard Dean are speaking out publicly in opposition to the violence.

“This needs to stop. These folks are undermining the cause of Black Lives Matter for whatever their own agenda is,” Dean Tweeted yesterday in response to a story about Portland in the Guardian. “I hate to say it but I bet most of the folks that burned down the police station here were white. That is what happened in Minnesota. John Lewis would not approve.” 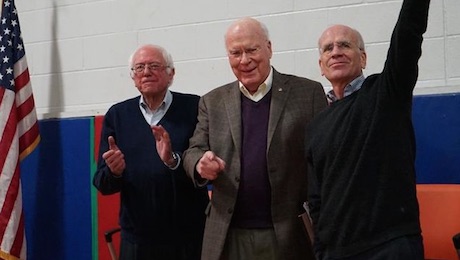 The most senior of Vermont’s “old guard” Democrats — Sen. Patrick Leahy — also condemns the Portland rioting. Vermont Daily reached out to Sens. Leahy and Bernie Sanders, and Congressman Peter Welch, asking them for their opinion on the violence in Portland. So far only this response has been received, via Leahy press secretary David Carle: “Senator Leahy has always supported and defended Americans’ constitutional right to peacefully assemble and to protest. He condemns violent acts and the destruction of property, of the kinds that have become an unwanted tangent to the otherwise peaceful protests in Portland.”

Vermont’s two other federal lawmakers seem more sympathetic with the rioters, including Antifa, a group of leftist anarchists well-established in Portland.

Sanders has in the past occasionally chided some “Bernie Bro” supporters who damaged property. But to date no-one from the Sanders office has replied to Vermont Daily’s request. But a July 18 Sanders tweet shows he has chosen sides: “Against the wishes of state and local officials, unmarked federal agents in combat gear have invaded parts of Portland, Oregon. This is what a police state looks like.  These troops must be withdrawn immediately. We must defend the Constitution. We must defeat Trump.”

On July 20 he and a handful of other Senate progressives (but NOT either Oregon senator) co-sponsored a bill to block use of federal law enforcement in response to rioting. Since then – perhaps because rioting remained strong even after federal police withdrew – the Sanders office and campaign appear to have been silent on social media, except to complain about the environmental impact of tear gas on the Portland sewer system.

Oregon supporters have consistently opened their wallets for Sanders, adding up to almost $3 million for 2019. Among fourth-quarter donors overall, the most common occupation was teacher, the campaign said. The average donation was less than $20. Sanders has been popular in the Beaver State ever since the 2016 election cycle, when he attracted huge crowds at Portland rallies that heralded his signature Medicare-for-All proposal. He won a thumping primary victory over former Secretary of State Hillary Clinton in Oregon, though he failed to win the 2016 nomination.

Welch, a member of the House Intelligence Committee, in a July 14 letter formally asked the FBI and the CIA to investigate “the spread of false information campaigns meant to magnify and invoke fear about activities of left-wing protest groups like antifa,” according to a July 14 NBC news report.

“Over the past few months, localized information about apparently non-existent Antifa gatherings and ‘invasions’ has proliferated in counties throughout the United States, sowing social and political division,” the letter co-authored with Rep. Raja Krishnamoorthi (D-Illinois). The letter also blames the Chinese for spreading misinformation about Antifa in order to incite division.

If fact, the culprit wasn’t the Chinese – it was an American Bernie Sanders supporter, according to a post by lawyer/columnist Jonathan Turley in the Washington Post:

“The Post found instead Adam Rahuba, a part-time food-delivery driver and supporter of Sen. Bernie Sanders.  Rahuba said he supports the ant-fascist movement Antifa, a loosely organized group that I have criticized in the past for its anti-free speech agenda. Rahuba, 38, was trying to make chumps out of the far right but some have suggested possible criminal liability for the hoaxes.

“Rahuba did not just make chumps out of the far right. The mainstream media took his fake postings hook, line, and sinker as a far-right call to arms.  He would spread rumors under false identities about efforts to confiscate guns or tear down statues to trigger the media and the far right.  Notably, many of those tweets and messages would reference Antifa as was the case with his hoax that there would be flag burnings at Gettysburg.

“When the Post caught up with Rahuba at a friend’s apartment in Harmony Township, Pa., he admitted his culpability and said that he is a democratic socialist who supports Bernie Sanders. He also said that he supports Antifa but is not part of an organized group (“I am antifa. But I think you’re antifa as well … as is everybody with common sense. But as a part of an organized group? Absolutely not.”).”

“Despite his eagle-eye focus on possible false allegations about Antifa gatherings, Welch — at least by reading social media and press announcements — seems oblivious to the actual non-stop nightly rioting and violence underway in Portland. Although silent himself, he has retweeted statements by others, including Rep. Jerry Nadler (D-NY) July 28 criticizing AG William Barr for “an authoritarian weaponization of law enforcement against American citizens.”

Vermont Daily will print any belated response by Sen. Sanders and Rep. Welch to our question.

3 thoughts on “Leahy and Dean condemn Portland riots – Sanders and Welch, not so much”