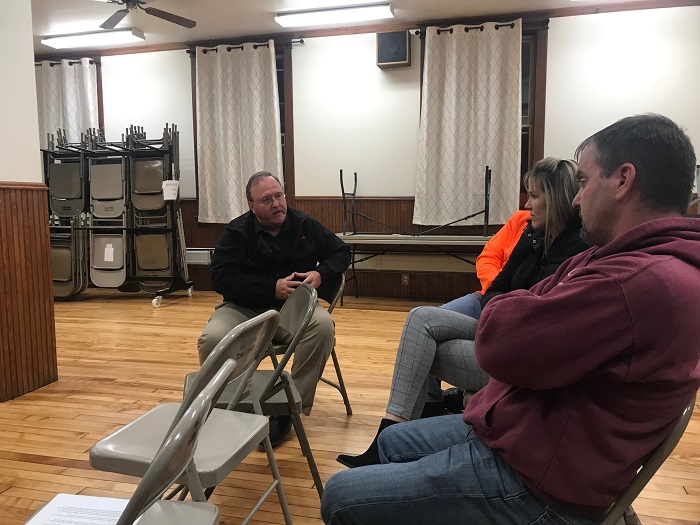 IRASBURG, Vt. — About two dozen Vermont residents met at Irasburg Town Hall on Thursday evening to discuss how to respond to continued efforts to indoctrinate children with genderless sex education and the controversial critical race theory.

Hosting the meeting was John Klar, a farmer from Brookfield, the founder of the Vermont Liberty organization, and also a 2020 GOP gubernatorial candidate.

Ingalls encouraged the community not to be discouraged by their middle school recently adopting another controversial equity policy.

“I know everyone is disappointed that the other night the middle school voted in the equity policy — yeah, that sucked,” he said. “But you know what didn’t suck? There were three people who voted against it. … We need three more people. For me, that’s a win, because a year ago all of them would have voted yes.”

Ingalls made headlines recently when he brought attention to an Irasburg Village School eighth-grade teacher that was introducing young children to different gender pronouns. He shared about the matter on Facebook, then was falsely accused of “doxxing” — by Senate President Pro Tempore Becca Balint, D-Windham — for sharing the teacher’s email address, which is public information.

Klar highlighted a recent NYPost commentary that detailed new evidence that pushing racial-themed initiatives on young students can actually cause harm to the very children they want to help.

“The new study says that putting a high-paid diversity bureaucrat the school pay role will actually make things worse for black and Latino students,” he read from the report.

The study found that the gap between black and white students grows from on average 1.9 to 2.5 grade points on standardized test scores after the equity worker begins.

Rep. Strong told TNR after the event that people are getting fed up with other school policies as well, such as overbearing COVID-19 mandates.

“I think that is leading particularly to opening this door to like, what are kids actually learning and what is going on?” she said. “What’s the quality of education at this moment in our school systems and I think there’s confusion and some overwhelming feelings by parents,” she said.

“And so I do have right here a few local families that just are saying, ‘Forget it, I’m going to homeschool,’ or there is a new Christian school that opened and they are sending their children there. She added that the Christian community in Vermont has been very aware and sees an opportunity in the recent exodus from public schools.

Klar noted that the current race-themed policies in Vermont education in some ways resemble the racism from before the civil rights movement.

“They are segregating children in schools and around the nation, they are having black dormitories at some of the colleges, they are having separate black graduations for some kids —  this is called segregation,” he said.

Klar also shared that the books of controversial social justice leaders such as Ibram X. Kendi are currently in Vermont public school libraries. Among numerous divisive statements, Kendi states that all white people who say they are not racists are actually speaking as white supremacists.

2 thoughts on “Lawmakers, residents discuss how to push back against indoctrination of students in Irasburg”