The Senate Judiciary Committee on Thursday took testimony on a bill that would allow guns to be confiscated from Vermonters having a restraining order against them, and potentially without constitutionally required due process.

Under H.133 — an act relating to emergency relief from abuse orders and relinquishment of firearms — if a court grants a Relief from Abuse Order (RFA), a judge could also order confiscation of the alleged abuser’s firearms, even if the accused has not yet had a formal court hearing.

An exchange between Sen. Joe Benning, R-Caledonia, and Legislative Counsel Erik FitzPatrick confirmed that, in some cases, guns will be taken without due process if H.133 becomes law.

“What this bill is calling for is to enable that property be removed in an emergency situation where there is no due process for the defendant?” Benning asked. 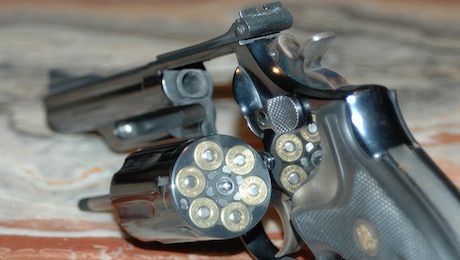 NO JUDGE OR JURY: According to a bill now before the Senate Judiciary Committee, there could be instances where Vermonters have their guns taken away without due process.

FitzPatrick responded that some cases would require “pre-hearing deprivation” — meaning, guns taken without a hearing first.

“I would agree with you to the extent that you are right that it permits the relinquishment of the firearm without notice to the defendant and without a hearing,” FitzPatrick said. “But I think under the due process precedents that there are circumstances under which short-term, brief denials of property can be done at what’s known as pre-hearing — in other words, it’s a pre-hearing deprivation.”

The point was made again when Sen. Philip Baruth, D-Chittenden, asked FitzPatrick about due process.

“Correct me if I’m wrong, but the judge has to find, on the basis of the evidence, that there has been abuse,” he said.

FitzPatrick answered the plaintiff does not need to be found guilty of any crime for the RFA and subsequent confiscation of the firearms to occur.

“Yes, not a crime necessarily,” he said.

FitzPatrick described the court process for getting a restraining order, and said “more likely than not” the decision is made based on an evidence standard.

FitzPatrick said issuance or denial of RFAs are decisions to be made by the court. “The terms of the order are discretionary,” he said.

Sen. Dick Sears, D-Bennington, questioned if this proposed legislation would work as intended.

“I think there’s a lot of questions here about how this would actually work in real-time and how they would prevent somebody from acquiring [a gun],” he said.

William Moore, Firearms Policy Analyst for the Vermont Traditions Coalition, submitted a letter to lawmakers saying that there may be legal grounds for a plaintiff to refuse compliance with confiscations.

“With Defendants being noticed for an RFA demanding firearms relinquishment,
would not the Defendant at the Time of Service of the initial RFA Order have a Due
Process right to refuse compliance and demand an ERPO [Extreme Risk Protection Order] procedure under the law? Or at least, a valid Search Warrant under VRCP [Vermont Rules of Civil Procedure] 41?” Moore wrote.