During a debate over mail-in voting Wednesday, the chair of the House Committee on Government Operations said Vermont law does not prohibit ballot harvesting, a controversial practice in which third parties collect and submit ballots on behalf of others during an election.

House lawmakers gave initial approval of S.348, a bill that grants Secretary of State Jim Condos unilateral decision-making authority to have absentee ballots sent to all registered voters in the state for the November general election. The bill, which already passed the Senate, requires a signature from the governor to become law.

“Are political entities such as 501(c)4s or PACs or other hyper-political agenda groups allowed to, under current statute, pick up ballots?” Leffler asked.

Copeland-Hanzas, who chairs the Gov Ops committee, said the practice is allowed by law. 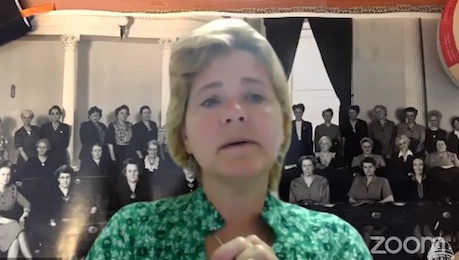 “Current law says that absentee ballots may be returned by any means to the town clerk’s office before the close of business on the day preceding the election,” she said.

The Secretary of State’s Office, Copeland-Hanzas added, is preparing to issue a directive to outline the proper way of returning ballots in the upcoming election, especially as it relates to involvement by organizations, neighbors and candidates.

“They are considering just these issues around whether organizations … whether a pastor, or whether a candidate themselves can return a number of ballots together. Under current law that is technically legal.”

According to the plan advanced by Condos, absentee ballots will be mailed to all registered voters on the statewide checklist for the general election, regardless of a request. The goal is to minimize the spread of the coronavirus. The primary election in August will not similarly attempt to minimize spread of the virus, but will operate by the standard practice of having Vermonters request ballots if they wish to vote by mail.

“I understand that current law allows now for us as candidates to retrieve ballots and collect them,” she said. “ … [But] right now, under current law and current practice, we don’t know as candidates whether or not an individual has requested a ballot. With this new change, everybody will receive a ballot.”

She expressed discomfort over the ability of third parties to take advantage of the situation.

“[There may be] candidates who have influence over others, who know now that they have ballots and could go and collect those,” she said. “I think … that perception of conflict is there.”

“I believe there is a real concern around mailing out every registered voter in the state of Vermont a ballot,” he said.

Higley said some estimates project there could be as many as 160,000 unused ballots if the measure becomes law. “[Who] knows where they could end up?” he said.

Town clerks have had a mixed response to the proposal, and many have stated they are against it.

“There will be probably 50 percent of those mailed ballots in the trash where anyone can do whatever they want with them,” said Rosemary Morse, the town clerk for Berlin. “And if someone wants to commit voter fraud, they will find a way to use them.”

After debate, the full House voted 106-31 to approve S.348. Scott has signaled that he does not object to lawmakers writing him out of the decision-making process.

The governor does not have the support of top Republican leadership, however.

Both Senate Minority Leader Joe Benning, R-Caledonia, and state GOP chair Deb Billado have expressed why they think expanding mail-in voting could be a bad idea.

Across the nation there is opposition to mail-in ballot expansions, including a legal challenge by Republicans against a similar effort in California, and in Nevada. The president has threatened to withhold money from states that go forward with universal vote-by-mail elections.