MIDDLEBURY, Vt. — Outspoken Addison County residents who attended a presentation about a proposed Vermont carbon tax last week expressed their displeasure with the plan, saying it will add as much as $1,000 to their current winter heating bill if adopted.

Rob Roper, president of the Ethan Allen Institute, a free market think-tank based in Vermont, discussed the “Essex Plan” Jan. 8 at the invitation of Jon Christiano, chair of the Addison County Republican Party. 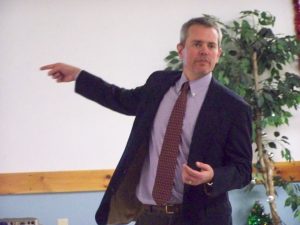 Rob Roper: “A carbon tax is not good for the economy.”

Roper is kicking off a series of community forums around the state to explain to voters the punitive nature of a carbon tax.

“A carbon tax is not good for the economy,” Roper said.

The plan, as discussed by Roper, is the latest carbon tax proposal to be bandied around in the new year.

ESSEX, a near acronym for for “Economy Strengthening Strategic Energy eXchange,” is spearheaded by Vermont climate-change activists and progressive business leaders.

“No particular organization is linked to the Essex Plan,” according to Roper. “But there are 13 authors who are linked to the climate-change movement.”

“At the close of the 2017 legislative session, legislators presented four different carbon tax bills, H.528, H.531, H.532, and H.533,” Roper said, adding that he opposes all forms of taxes and fees on carbon-based fuels.

Roper described the new carbon tax idea as the latest “zombie” plan to pop up in the Vermont Statehouse.

“The carbon tax in Vermont is really like a zombie,” Roper said. “It’s a body snatcher that will not die.”

He pointed out that activists have been stacking public forums with carbon-tax advocates and filling local papers with letters-to-the-editor and guest commentaries.

Ironically, at the close of Roper’s presentation for Addison County, a self-identified supporter of the tax, a resident of Chittenden County, identified himself to the audience and asked to hand out favorable literature on the plan. Roper said he welcomed the opposition.

While the acronym ESSEX may stand for something that sounds positive, Roper noted wryly that he likens it to the 1820 tragic wreck of the New England whaling ship Essex, which inspired Herman Melville’s classic novel, “Moby Dick”.

“The wreck of the Essex resulted in the surviving crew members cannibalizing each other,” he said.

Roper also outlined the fact that plan now being considered by many Democrats and Progressives in Montpelier would see a $240 million tax on gasoline (32 cents per gallon), heating oil and diesel fuel and natural gas and propane (24 cents per gallon).

According to Roper, the plan increases are less than those presented in an earlier Vermont Public Interest Research Group (VPIRG) carbon tax plan, which would have added over a half a billion dollars in tax. But he still thinks the plan is odious.

Roper explained that electric subsidies under the plan would offer $8 million in savings for a company such as Global Foundries and lower the utility bills of ski resorts, which are electricity intensive operations.

“Sure the Ethan Allen Institute supports making it cheaper to do business in Vermont, and we want these businesses to succeed, but it’s not desirable to make it so by forcing taxpayers to cut these companies a check. This is what the Essex Plan effectively does.”

“Here’s a good example: Bennington College student and carbon tax activist Sabrina Melendez sent around a letter to the editor.” he said. “She wrote, ‘We used to call it a carbon tax until we realized that it gave individuals the impression that they would be taxed for their carbon emissions.’ You have to laugh at that.”

Roper also noted that Vermont legislators who support the idea of a carbon tax are not going to stop promoting the idea. 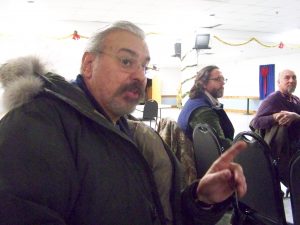 Middlebury resident Thomas Sinacore: “This plan is going to add more than $1,000 to my heating oil bill. And that doesn’t even include my propane gas or gasoline costs. I am not a philanthropist; I don’t want to subsidize companies. I don’t want to pay another penny in tax. Period.”

“They like to call it revenue neutral,” Roper said. “Well, last year Rep. Johanna Donovan told a WCAX-TV reporter that ‘if indeed some of the draconian (federal budget) cuts we hear may be coming our way, these (carbon taxes) are things we could use to raise revenue.'”

During a question-and-answer session at the conclusion of Roper’s formal presentation, attendees had an opportunity to sound off, pro and con, about carbon taxes.

“Do these progressives (supporting carbon taxes) understand economics at all?” asked Douglas Tolles, a resident of New Haven. “They’re uninformed. … We can’t afford to stay here now, and then you jack up heating costs, then where do we go?”