This commentary is by Kevin Mullin, chair of the Green Mountain Care Board.

In recent months, many people have questioned me on whether I believe health care reform efforts are working in Vermont and if so to quantify it. To accomplish that, it’s important to go back in time and talk about efforts over the past couple of decades to create a baseline.

In the mid-2000s, under the leadership of then Senator James Leddy, the legislature took a hard look at where Vermont was heading and they didn’t like what they saw. It was clear that chronic illnesses were a major cost driver and there was a lack of coordinated care.

At the time, we had more than twice as many uninsured as we have today. Working with the Douglas administration, creative solutions like the Blueprint for Health (supporting primary care and creating community health teams) and Catamount Health (an insurance program) were a result of the joint effort.

Vermont was ahead of the rest of the country on trying to make health care universally available. In 2010, President Obama signed into law the Patient Protection and Affordable Care Act. The following year, under the leadership of then Senator Claire Ayer and Governor Peter Shumlin, Vermont took another major step in reform by passing Act 48.

At the time of both these major reform efforts the discussions were realistic and focused on containing cost growth (not reducing actual costs) while at the same time ensuring both access to and quality of care. It was clear that health care costs were on an unsustainable path where spending had grown from one out of every nine dollars spent in the state to close to one out of every five.

One can see that as a percentage of the state’s overall economy the efforts probably were a success. Quantifying the savings in dollars from the success of the state’s effort is a much more difficult task and one at which I will take a stab. My analysis will focus on a range of probable savings based on comparing Vermont’s growth in health care spending between 2000-2009 with spending between 2013-2019. (2019 is the most recent year of published expenditure numbers due to the time lag of claims being paid and reported.)

This is not the first time this type of analysis has been performed. Blogger and health care researcher Hamilton Davis blazed this path in 2019. The time period after 2013 is when Act 48 had a chance to be put into motion.

To calculate the minimum and maximum dollar values for Vermont’s reform savings, I will calculate (with my very capable staff’s assistance) how much Vermont would have spent on health care if the compounded annual growth rate experienced between 2000-2009 (7.6%) continued during 2013-2019. Assuming spending growth had continued at 7.6%, Vermont would have spent $43.3 billion. Actual expenditures during these years were $36.8 billion.

For the purposes of this analysis, I will refer to the difference – $6.5 billion – as the high end or maximum amount of savings.

If Vermont expenditures grew at this pace, we would have spent $38.8 billion, or $2 billion more than our actual spend of $36.8 billion. 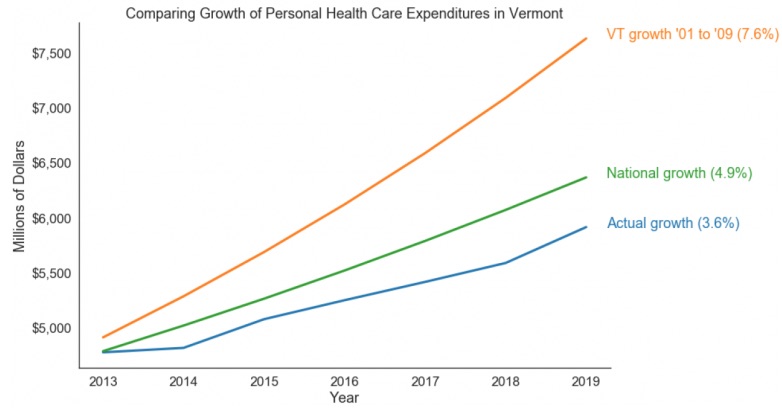 These scenarios show that health reform savings between 2013-2019 likely fall between $2 billion and $6.5 billion. It is more likely that the actual savings are closer to the lower end, but they are still significant. Therefore, the answer to the question of whether reform efforts have been successful is probably.

What created the savings? Was it the All Payer Model, the hospital budget process, insurance rate review? Maybe. Was it the collaborative effort of Vermont providers to coordinate care, promote prevention and wellness, and move away from volume to value in patient care? Probably.

One thought on “Kevin Mullin: Health care reform efforts ‘probably’ have been successful”