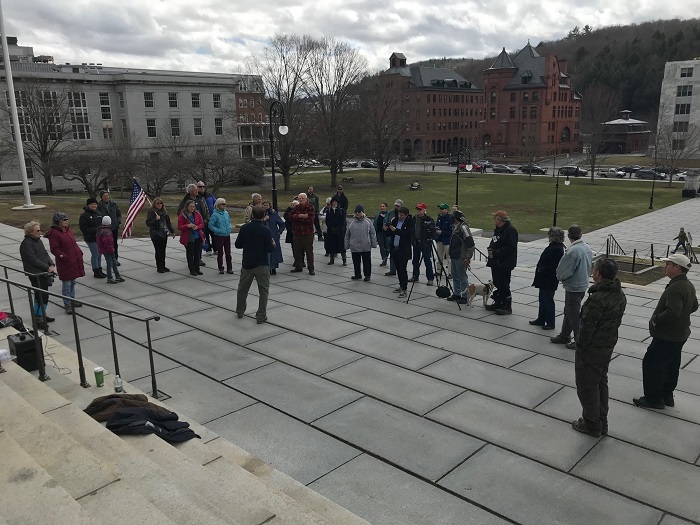 Conservative group Vermont Liberty Network held a rally Saturday that drew about 70 Vermonters to celebrate the Green Mountain Boys and hear from a journalist who was banned from attending the governor’s press conferences.

As rally-goers gathered at noon on the chilly spring day, NEK-TV news host Steve Merrill took to the microphone as the first featured speaker of the afternoon. The Scott administration banned Merrill from posing questions in February after he asked how the state would decide who is an indigenous person with regard to priority distribution of the coronavirus vaccine.

“I guess when they saw that the (NEK-TV) station manager wasn’t going to reel me in or take me out to the woodshed, they quickly changed topic, and suddenly they said they hadn’t been able to find anything [demonstrating racism] from my show on YouTube. And suddenly they found some YouTubes of some old shows that were mostly comedic and not really hard news,” Merrill told the crowd.

He said the administration considered his work “hobby entertainment.”

“I wasn’t real news, and this is after nine-and-a-half months of asking the questions, and I know a little bit about censorship and communism and socialism because, even though I have an old Yankee last name, my mom was an immigrant from Stalin’s Soviet Union.”

Merrill shared some of his family’s history, including experiences of the World War II era in Eastern Europe. He said this family history gave him a keen eye for government overreach and censorship.

“We had a good schooling on socialism, communism and censorship when we were kids,” Merrill said. “For them to pull my privileges, and then I appealed it, and they denied my appeal of course without a reason except for the hobby news thing. I guess they didn’t want me asking any more technical questions because I’ve done a lot of technical questions about the adjuvants in the vaccines.”

He said he tried to remain on good terms with Gov. Phil Scott throughout the discussions.

“We were polite, we were asking pertinent questions, tough questions, and (Health Commissioner) Dr. Levine would get up and say ‘well it looks like you’ve done your homework here.’ Which I had spent many hours in front of a computer to dig up this stuff and there’s a lot of questions,” Merrill said.

Also speaking at the event was Vermont Daily reporter Guy Page. During his speech, Page reminded everyone that while pro-constitution causes may feel like an uphill fight, the same was true during the Civil War, The War of 1812, and the American Revolution.

He said citizen engagement is necessary to keep Vermont as a center of freedom.

“First of all freedom from slavery, but there are all sorts of free-love, communes — social ideas that were basically on the idea that this is a free state and nobody is going to be here telling us how to do things,” Page said.

“Probing for answers to difficult medical questions has been there throughout the press conferences with our governor,” he said. “And that does annoy him and Mr. Levine because they want little lobs like, ‘Oh, how is your dog? Who are you rooting for in the Super Bowl?’ That’s the questions they want.”

Klar recalled past generations and their efforts to resist government overreach, and he reminded the crowd that it’s preferable to take a stand while freedom yet exists.

“Imagine being in the French underground in the resistance against the Germans — that’s where you are going to be later,” he said. “Are you going to have more bravery then than you have now?”