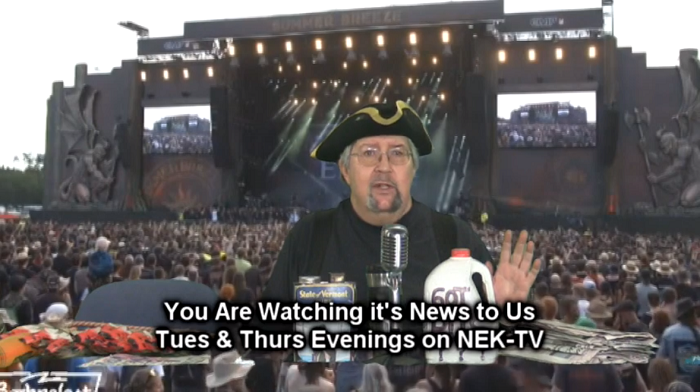 NEK-TV host Steve Merrill says his being banned from the governor’s biweekly press briefings will have a “chilling effect” on media in Vermont.

“It’s called the chilling effect. You better be careful what you ask or you are toast,” Merrill told True North in an interview Saturday. “I think it’s because they didn’t like my questions, and I think they were looking for a reason to get rid of me.”

Merrill, the host of the public access NEK-TV program “It’s News to Us,” has been a regular participant in the governor’s press briefings for more than nine months. He’s gained a reputation for asking questions that challenge mainstream narratives on a range of topics.

At the governor’s Feb. 2 press conference, Merrill asked Gov. Phil Scott how the state would decide who is an indigenous person with regard to priority distribution of the coronavirus vaccine. During the question, he referenced the controversy surrounding Massachusetts Sen. Elizabeth Warren, who in 2019 apologized for having claimed falsely she was Native American.

“Do we use the Elizabeth Warren standard with high cheekbones, or did you just take people’s word for it?” Merrill asked the governor.

The crack about Warren prompted Scott spokesperson Rebecca Kelley to tell Merrill he should not call in again.

Merrill, in his defense, said the “high-cheekbone” remark was a direct quote from Warren in 2012, when she used the phrase to describe indigenous people. The incident prompted Kelley to send a letter to NEK-TV station manager Tod Pronto on Feb. 3. In it, she accused Merrill of “perceived racist comments/questions.”

“Considering the long-overdue national reckoning on systemic racism happening in America, and our renewed efforts to address bias in our state and nation, we are compelled to reach out to you,” the letter read.

Merrill said the governor’s office should provide examples of the perceived racism.

“I said if they had any examples they would list them. I mean it’s like now I’ve got the Scarlett Letter — how do you disprove being a racist?” he said, adding that he’s not racist.

“I mentioned this to Scott during the Black Lives Matter thing in the spring, that not all of us are a bunch of red-neck hillbillies. I mean, I grew up next to an army base, I went to school with kids of all colors and creed, I’ve worked in the trades, and the only thing that mattered was that you could do your job,” he said.

In the Feb. 3 email, Kelley indicated that the governor’s office “should not dictate who qualifies as a member of the press when they are representing a news organization, which is why we are seeking the station’s guidance in advance of Friday’s press briefing.”

Kelley also claimed the administration is fair to the press: “Our office firmly believes in the fundamental necessity of a free press, enshrined in our Constitution, and does not believe the government should dictate who qualifies as a member of the press when they are representing a news organization like yours.”

“It’s News to Us” is a news parody and opinion show, not “straight news,” according to Merrill, who often appears dressed up in humorous attire “to catch the channel surfers.” During press conferences, the NEK-TV host attempts to challenge the governor with tough questions.

“I’m just a dumb old machinist, but you know, I’ve got a pretty good BS-detector,” he said.

Merrill recently posed questions concerning the accuracy of the PCR test, the popular coronavirus test used in Vermont and much of the nation despite concerns that it may produce false-positives. “The guy who invented it [Kary Mullis] … said it’s not to be used as a test to diagnose anything,” Merrill said.