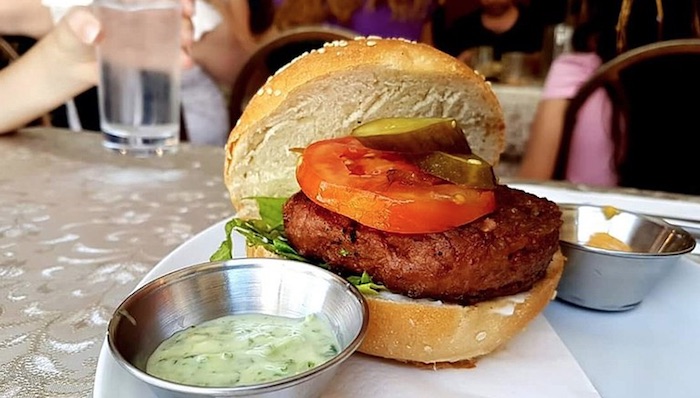 A meat alternative or meat substitute is a food product made from vegetarian or vegan ingredients (such as plant based) and eaten as a replacement for meat.

G.K. Chesterton observed that the reason people don’t see God is that they are kicking their heels at heaven, and so their heads are stuck firmly in the mud. As far-left agitators such as AOC and Bill Gates badmouth cow farts and push to eliminate meat from the American diet, Chesterton’s adage comes to mind — those who kick at cows have an upside-down understanding of the world and their heads are stuck in ideological muck.

Though AOC stepped back somewhat from her initial proclamations against cows, she has repeatedly called to reduce meat consumption. Citing three-burger-a-day diets, AOC claimed:

It’s not to say we’re going to force everybody to go vegan or anything crazy like that. But it’s to say, listen, we’ve got to address factory farming. Maybe we shouldn’t be eating a hamburger for breakfast, lunch and dinner. Like, let’s keep it real,” she continued. “We have to take a look at everything.”

It is ironic to “Like, keep it real” while suggesting people “maybe shouldn’t eat” hamburger three times daily. It is absurd to suggest that cows should be eliminated to save the climate, yet that is precisely what is being touted — the zany left is trying to force everybody to go vegan. Animal rights activists rabidly attack cows, and want to erase them from the planet in the “cause” of saving them.

In March 2016, Memphis Meats, located in San Francisco, California, USA, unveiled the first lab-grown meatball, at a cost of $18,000 USD per pound. … The company’s target launch for consumer products is 2021, with limited distribution to high-end restaurants in 2019. Memphis Meats recently obtained $17 million in Series A funding from investors including Cargill and Bill Gates.

One must wonder whether Mr. Gates’ profit interests impede his objectivity about cows when he seeks to compel people to eat his synthetic vat meat. Perhaps his kicking at cows is not motivated by a philanthropic desire to save the poor beasts — his head is stuck not in mud but in money. Gates wants all “rich countries” to switch to synthetic beef, stating:

Eventually, that green premium is modest enough that you can sort of change the [behavior of] people or use regulation to totally shift the demand. But … the politics [are challenging]. There are all these bills that say it’s got to be called, basically, lab garbage to be sold. They don’t want us to use the beef label.

Catch that? Bill Gates is grousing he can’t label plant-based synthetic crap grown from stem cells as animal flesh. Americans should watch the money-birdie in these boondoggle save-the-world schemes: it is not just solar panels and EV cars that do more environmental harm than good while making billions for industrialist profiteers.

There is big money in fake meat, because tech giants file patents to profit from the chemical creations and stem-cell growths they feed people. It’s another factory gimmick designed to create profits through a false consumer panacea about climate change. But neither human health nor the environment will benefit.

Back in 1973, one industry insider creepily boasted about artificial chemical flavorings:

Flavor chemists have the capability and “tools” to duplicate the metallic canned character that is characteristic of many of our canned fruits. Thus, not only has the flavor chemist duplicated nature but he is also concerned with duplicating flavors that are a result of modern food technology.

The presentation went on to explain the profit potential of mixing meat with plant-based inputs. We are told vat meat will save the ecosystem, but the real motive is profit domination:

The major impetus for partial meat replacements are lower retail prices … Table 2 illustrates the cost savings that can be realized when 20 and 40% of the meat in hamburgers is replaced with extruded soy protein. … It is our opinion that the long term success and consumer acceptability of these products, especially at the 40 and 50% replacement levels, where extremely attractive retail prices are realized, is dependent upon the production of texturized protein that is bland in flavor, and the availability of synthetic meat flavors that function in these systems and impart a high quality, true meat flavor to the product.

Mmmmm. Yummy. But the industry has come a long way technologically since 1973, when dimethyl dihydroxy dithiane (an irritant) was praised for its “roast chicken flavor.” But those hippie-day chemicals were like making computers in a garage compared to what stem-cell technologies and highly specialized artificial flavorings can create in today’s meat-vat slime-labs. In an industry publication tastily titled “Evaluation of the Deliciousness of Artificial Meat,” would-be consumers learn:

Cell culture technology, which has been mainly used in the medical field, has been applied and researched all over the world for more efficient production of livestock products such as meat, chicken eggs, and milk. The challenge with developing cultured meats is to reduce manufacturing costs in order to trade at prices comparable to traditional meats.

As with solar panels and EV cars that accelerate manufacturing pollution and consume fossil fuels (including coal), the pretense of saving the planet by eradicating cows and their methane is actually driven by a desire to make billions of dollars while monopolizing food production and sales. But these vat-meat financiers and designers have missed the most important part about cows, which is not their meat but their poop.

9 thoughts on “John Klar: Zany left is trying to force everybody to go vegan”