A transgender student who was born male but identifies as female has created a stir at Randolph Union High School, causing female student athletes to lose access to their locker room.

Administrators at the school have allowed transgender students to play on opposite-sex teams and use the corresponding facilities for the gender that they identify with. This means biological males may use female locker rooms and vice-versa. But some players on the school’s girls volleyball team have objected to the policy. 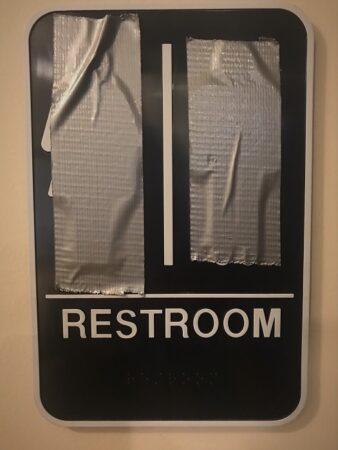 GENDER CONTROVERSY: A bathroom conflict concerning a transgender athlete has materialized at Randolph High School, and now girls are banned from using their own locker room.

School officials are investigating an incident that involved a transgender student using the female locker room. For now, students have been instructed not to use the locker rooms, and it’s not clear when they will be available again.

Student Blake Allen, speaking to WCAX, defended her position against allowing biological opposite genders to use school locker rooms.

“I feel like for stating my opinion — that I don’t want a biological man changing with me — that I should not have harassment charges or bullying charges,” she said.

The school argues that state law protects transgender students’ preference to use any public bathroom or locker room they want.

However, a recent U.S. Supreme Court ruling could have implications for bathroom use. The ruling indicates that a First Amendment principle known as the “compelled speech doctrine” means that transgender students cannot force other individuals to accept their beliefs.

“In the spring of 2021, Shawnee State University philosophy professor Nicholas Meriwether won a favorable ruling on appeal in a First Amendment lawsuit against his university,” TheFire.org reports. “In a unanimous decision, the U.S. Court of Appeals for the Sixth Circuit held that Meriweather sufficiently alleged Shawnee State burdened his rights to freedom of speech and religious expression by insisting he refer to a student using feminine pronouns.”

Back in April, Gov. Phil Scott weighed into the transgender debate with a posting on Twitter, encouraging acceptance of those individuals.

Across the country, we have seen disturbing hostility towards the transgender community. Unfortunately, recent events show we are not immune to this in Vermont, and we must commit to continuing our work to make Vermont a more inclusive and welcoming place. 1/

Another post, by Twitter user Erin Reed, cited an incident where a father became so upset that a transgender or drag queen might approach his child at school, he made threats of violence.

A man in Vermont just threatened to shoot up a school if his child gets approached by a transgender person.

In Kiel, Wisconsin, bomb threats were made to end a title 9 investigation into bullying a trans girl.

Polling indicates that the general public is not on board with transgender rights when it comes to bathrooms and locker rooms. A Pew Research poll indicates that significant majority believe transgenders should use the facilities associated with their biological sex.

“The results are from a Pew Research that revealed 64% of respondents approve from protection from housing and jobs discrimination,” WorldNetDaily reports. “But nearly that number, 58%, would require that trans athletes compete on teams aligned with the sex into which they were born, and by a 41%-31% margin would insist trans individuals use “public bathrooms that match the sex they were assigned at birth.”

In Vermont, gender battles have even erupted in violence. “Gay rights activist Fred Sargeant was reportedly assaulted at an LGBT event in Burlington, Vermont, for holding signs critical of the transgender movement, the 74-year-old French-American activist said Sunday on Facebook,” the Daily Caller reports.

“It’s like me going into a girls’ bathroom wearing a wig,” then 15-year-old Tanner Bischofberger was quoted as saying.