It is criminal to inject vaccines into healthy children who are at nearly zero risk of death or serious illness from COVID-19. Masking is similarly obnoxious in young children — even if masks do work, healthy children are not at miniscule risk from COVID but are harmed by the fear-mongering, the social alienation, and for some children the masking itself. But these policies for public school children have created a host of other problems — shutdowns of schools due to outbreak scares, and shutdowns due to a lack of bus drivers.

This shortfall of bus drivers reveals the utter failure of government to serve as economic grand wizard in this or any other time. Economies should be run by entrepreneurs and people who get actual work done: the opposite of career bureaucrats. In Vermont, many public schools were recently closed due to a shortage of bus drivers caused by COVID testing requirements for drivers. But the episode reflects numerous weaknesses in this seemingly simple task of getting kids to school.

The bus driver shortage is a national problem. Dufour Transportation, which cancelled service for a number of Vermont schools when it lacked enough drivers, is a Massachusetts company that offers pay of $20.75 to $21.95 hourly. The shortage of workers created by offering millions of people printed money to stay home is causing wage inflation — McDonald’s now offers $21.00/hour to keep its business operating. But why would anyone invest in becoming a bus driver for a restaurant wage? — the regulations for qualification are tougher than ever:

People who do not already hold a commercial driver’s license must complete 60 hours of instruction between the classroom and behind the wheel to become a school bus driver, according to the state’s website. Forty hours of instruction are required for those who already have a commercial driver’s license…..“We could go months without someone coming in and then have someone come in who’s interested, but when they figure out what they have to go through, they can’t run out the door fast enough,” [one operator stated].

Massachusetts appears not to have closed any schools when there was a driver shortage — Vermont schools were closed instead. And Massachusetts has dispatched National Guard troops to drive buses:

Gov. Charlie Baker’s order made up to 250 Guard members available, and so far, the administration said that more than 190 members have completed the driver’s certification process to operate the vans.

Vermont’s public education system — already one of the most expensive in the nation despite Vermont’s meager median incomes — is being exposed as a failure. Vermont has increased costs and expanded personnel despite losing some 25% of the student body. (Many schools were closed under Act 46, but those “education jobs” expand faster than new kids arrive — “Schools close; Bureaucracy grows!”). Stay-at-home learning under the COVID phobia was clearly deficient, yet the Vermont Progressive cult was undeterred by COVID-19, taking advantage of the crisis to launch radical social experimentation on our children. Critical Race Theory (“not being taught,” parents are told, while it is visibly applied to their children) is attracting huge spending for safe spaces, off-campus contractors, and dubious social conditioning technologies that will create child social activists for a one-party Far-left future. A hundred or so newfangled and as yet undefined gender selections are now offered to very young children from which to select, and parents who object are dubbed child abusers. Yet they can’t solve the bussing problem they have created. 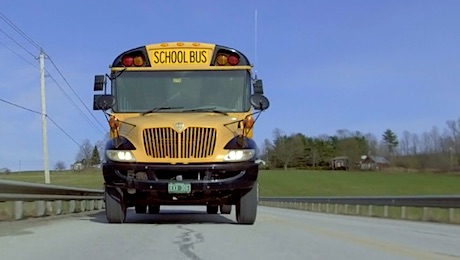 A hundred or so newfangled and as yet undefined gender selections are now offered to very young children from which to select, and parents who object are dubbed child abusers. Yet they can’t solve the bussing problem they have created.

The Far-Left wingnuts in control of Vermont’s school curricula have elevated social brainwashing abovetraditional subjects such as math and reading. Children in Vermont are not just being taught that Vermont was “built” by black slaves, when in fact slavery was never legal here. They are being sexually, politically, and socially conditioned: “active shooter drills” traumatize kids while conditioning them to surrender all guns, and the Second Amendment, to a growing totalitarianism.

The elitist rulers who are visibly subjugating us and thieving our children’s minds, cannot provide bus serviceto get their charges to their totalitarian indoctrination facilities. Vermonters are pulling their kids from the noisome institutions (as well they should), and enrolling them in private schools that can be trusted to TEACH. Perhaps the utter implosion of Vermont’s schools would be a good thing. The evidence during COVID unveils a pernicious, vile infiltration of most of our schools by cultish zealots who teach their personal political views and launch a new racist ideology. The transgender pronouns for young kids are just the latest stage of re-programming young brains for a life of hellish misery — none of this stuff is proven; it will all fail like the eugenics movement it so closely resembles.

Imagine if in the 1920s eugenics had been incorporated into Vermont’s public school curricula, and poor farm kids targeted for early sterilization. At some point one would expect the parents to ask questions about their newly-eunoched sons and tube-tied daughters when they came home for supper. Now that Vermont children can get gender hormone therapy for free behind their parents’ backs, and are being conditioned to condemn their parents and grandparents as white supremacists, that conditioning is making its way into homes, and the jig is up — this new dogma makes eugenics look relatively innocuous! The fact that untested technologies, artificial intelligence, “persuasive” gamification and virtual reality “tools” are being rapidly developed and implemented to augment this reconditioning of young minds, exposes the spectre of something beyond even Geroge Orwell’s dystopian warnings. This, by the government that closed schools because two drivers had the sniffles and had to await COVID “testing.”

Vermonters, get your kids (or grandkids, or nieces or nephews) out of public schools, at any cost! These schools are beyond salvage, and are a direct threat to our children. School choice and income-sensitive subsidies must displace this totalitarian domination, so that Vermonters will no longer be compelled to pay for unsavory, disgusting indoctrination, and can instead protect their children from this abuse. Private schools are managing to charge less per student than the government, and still get children transported to class.

We can’t trust Vermont even to secure reliable transportation for our public school kids. Someone should call out the Vermont National Guard — not to drive busses, but to protect children from abuse.