The recent film “Planet of the Humans” documents very real shortcomings with solar power as a solution for environmental degradation. Controversial producer Michael Moore backed the film, which has led to a huge fracas over its claims.

Vermont has mandated taxpayer subsidization of solar panels to achieve future “carbon reduction targets,” but the present and future environmental costs of solar panels have been routinely ignored in this bizarre calculus. Renewable energy advocates treat solar panels as if they drop innocently from the sky (like rays of sunshine), with no carbon (or chemical) footprint of their own. 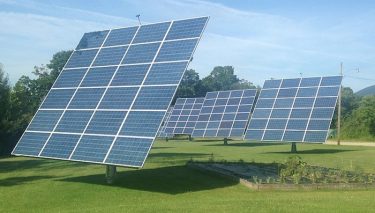 Nevada and Arizona lack Vermont’s bevy of solar panels, because without government subsidy there is no economic return on solar investment even in those sunny states. Vermont rates 44th in the nation for its share of sunshine, but near the top in its installation of solar panels.

Eventually, Vermont seeks to offset the fossil fuel grid with ubiquitous solar panels. In a simple analysis, one could compare the net amount of pollution generated in the construction and operation of a conventional power plant with the total pollution generated in the alternative manufacture and installation of millions of replacement panels. But it’s not that simple.

For instance, there are pollution costs from transmission lines and maintenance of grid systems.  Vermont’s solar scheme does not eliminate the grid (people who install solar panels sell back their excess production): if it did, all those homes would require banks of batteries with yet greater environmental damage. Solar panels thus do nothing to alleviate the environmental impact of transmission lines and their maintenance.

There are many other undiscussed costs of solar installations that renewable energy advocates do not wish taxpayers to ponder: shortened life expectancy of installations in cold climates; reduced efficiency in areas with less sunlight; disposal difficulties; the much higher cost of residential rooftop applications than community systems. The more these numerous problems are assessed, the less stellar solar looks.

Vermont announces that it will “curb greenhouse gas emissions” by such-and-such a percentage, by such-and-such a date. But these projections are not just fantastical — they are fictitious, concocted by excluding solar panel pollution inputs from assessment. Ignored are the energy and pollution from the mining of materials, manufacturing, and distribution of those solar panels.

The bulk of solar panels are manufactured in China, where solar companies have a poor track record of environmental compliance. Solar panels entail numerous component parts. The technology is largely based on the use of silicone, which is manufactured from heated quartz (releasing carbon dioxide and sulfur dioxide). Monocrystalline and polycrystalline panels both generate silicone tetrachloride in production, a nasty by-product. Thin-film technologies create yet more chemical wastes, including cadmium telluride and copper indium selenide.

Then, these glorious, world-saving products are transported from China to Vermont, consuming still more fossil fuels and packaging costs that are not counted when assessing all that globe-saving fuel reduction forecast for Vermont’s future. Ignored also are the future pollution costs when these panels deteriorate and must be taken down. Proponents dismiss this concern with a wave of the hand, but recycling solutions do not look promising.

China is already encountering the problem of decommissioning solar panels. It is estimated that by 2050 these waste panels will amount to 20 million metric tonnes of waste, leading one manager of a recycling company in China to proclaim that the solar power industry [is] a ticking time bomb. “It will explode with full force in two or three decades and wreck the environment, if the estimate is correct. … This is a huge amount of waste and they are not easy to recycle.”

In its grand designs to combat global warming with solar panels, Vermont has not estimated these future disposal costs, or the sizable present environmental costs of manufacturing and shipping for residential installation. Being colder and cloudier than most states, Vermont is perhaps the least sensible place in America to compel the installation of solar panels.

Or perhaps, weather aside, Vermont is the just the least sensible place in America.