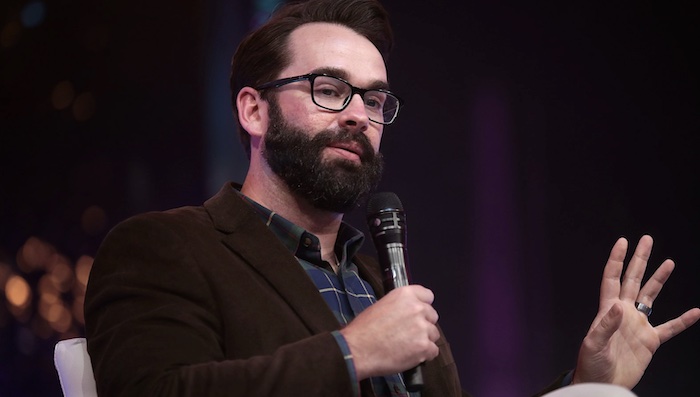 Matt Walsh is a political commentator and author of four books, including “What is a Woman?” The book has been made into a documentary film about gender and transgender issues.

Vermont university and public officials worked frantically to prevent a January 15 showing of Matt Walsh’s documentary What is a Woman?  The event was scheduled by Travis Allen, father of the local Randolph Union High School girl who complained about being compelled to undress in front of a biologically male student. School security for Vermont Technical College pulled the computers from the building, and informed Mr. Allen that he could not use school equipment under the leasing agreement.

Had this been X-rated pornography or featured drag queens for young children, these public officials would likely have shared the event gladly. But private citizens using public property to view a trans-documentary is verboten.

We cannot keep on perpetuating the hate in our already broken community. … Here’s some of trans liberation group intel: Trans liberation group are asking central vt community to call VTC and express their dismay at hosting this event. … “Hello, my name is … and I want to express my disappointment that VTC would show a transphobic propaganda film in the same town where recent Transphobic events have occurred…”

The alleged “transphobic event” involved girls complaining about a biological male gawking at them while they changed, which was portrayed as harassment of the biological boy. The girls have been discredited by school authorities, despite the transgender voyeur’s recorded admission that what the girls reported is exactly true.

It is troubling something like this is happening on the grounds of a public education institution, in a community where young people have been viciously put at risk. … This event is sure to stoke the fires of hate.

The fires of hate are stoked by these government mouths — attendees at the voluntary showing included parents of children who have been “viciously put at risk” by reckless government ideologues. These public employees demand content discrimination on behalf of “trans liberation group” (whoever that is).

It is verboten to even watch a film in Vermont if it questions official government propaganda about queer ideology and the potential harms thereof to minor children. Walsh’s film does just that:

The documentary tells stories of young female athletes forced to compete against, and share locker rooms with, biological males who identify as female. …The documentary’s strength is in being educational about the current status of the gender-ideology movement, its cultural influence and its dangers.

Vermont is abolishing basic civil rights. The father of a girl punished for objecting to biological males in the girls’ changing room is prohibited from airing a documentary about female athletes being compelled to change in front of biological males in locker rooms, by the same government that compelled his daughter to disrobe.

Vermont Tech distributed an email an hour after the event was canceled, by President Parwinder Grewel:

I am committed to ensuring that our students and employees are welcome and feel safe. This week, we will review our facilities use policies and engage our community in any changes to them, recognizing our responsibility as a public institution to maintain reasonable and viewpoint neutral policies. We encourage all to engage in civil discourse and thoughtful debate that does not normalize discriminatory but protected speech.

This is far from “viewpoint neutral”: the college claims it must not “normalize discriminatory but protected speech.” American First Amendment law “normalizes” protected speech. Walsh’s film constitutes protected “thoughtful debate” about the merits of the gender theory which is “woven into every tenet” of this government institution. Viewing a popular movie is prohibited because it transgresses against the established trans-dogma of the woke state.

More viewings of What is a Woman? are being scheduled in Vermont — with free popcorn and pizza. If the speech-stiflers hate it this much, it merits another gander.

18 thoughts on “John Klar: Vermont doesn’t know what a woman is”