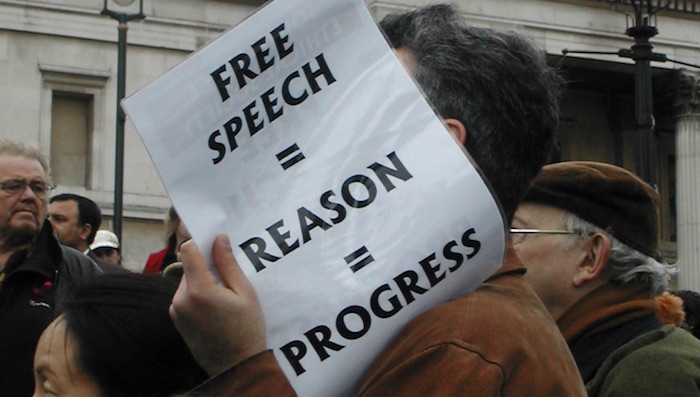 The obviously unconstitutional S.265 makes little effort to hide the fact that its purpose is to intimidate voters against criticizing representatives — even when the latter are overtly violating basic tenets of law.

Vermont’s Senate has amended the state’s assault statute mightily. S.265 seeks to heighten penalties for threatening with the:

In other words, Vermont seeks to send citizens to jail for threatening political leaders for twice as long as if they physically assaulted them! Political speech is the very highest and most protected form of free speech in American jurisprudence: Vermont now has more upside down than right side up laws, and the whole bizarre circus is unraveling.

A Shakespearian character famously proclaimed “the first thing we do, let’s kill all the lawyers.”  Now, under Vermont’s new law, that statement could land someone in jail, especially if one of the faux lawyers in the Legislature says they feel threatened — the revised statute will criminalize threats against “groups of people,” possibly even when they aren’t present. These legislators do not seek to shield public servants from unprotected threatening speech, but to intimidate the public for engaging in protected speech that criticizes social justice.

This specifically targets a political intent. The obviously unconstitutional S.265 makes little effort to hide the fact that its purpose is to intimidate voters against criticizing representatives — even when the latter are overtly violating basic tenets of law. Legislators in Vermont have called to ban unvaccinated people from entering public buildings, suborned voter fraud, pushed for transgender therapies for children with no age limit or parental consent, distributed funds and privileges solely according to skin color, and are currently crafting numerous other patently unconstitutional laws.  Meanwhile, a Republican state senator who challenged a teacher on behalf of constituents for pressuring young students to employ gender pronouns was attacked by the Vermont Left for allegedly “doxxing” the teacher — for making his already-public email public.

S.265 also eliminates a statutory speech protection making it an affirmative defense if it is impossible for the defendant to carry out the crime. Thus, if a person threatens nuclear war against filthy lawyers, they could be charged even when they own no nukes.

The statute seeks to ban specific content, and it is also strikingly vague — it seeks to protect all public servants and employees, including teachers, from threats:

A person who violates subsection (a) of this section by making a threat that places any person in reasonable apprehension that death or serious bodily injury will occur at a public or private school; postsecondary education institution; place of worship; polling place during election activities; the Vermont State House; or any federal, State, or municipal building shall be imprisoned not more than two years or fined not more than $2,000.00, or both.

What of off-duty teachers or employees — are they always held to a higher protection status than the parents of their students? Is there an affirmative defense or mitigating factor if the public employee actually violated the law in the performance of their duties? This idiotic statute is designed to silence dissenting opinion by parents and constitutionalists, and is thus the most base form of unconstitutional law. It is content-based, and creates two classes of Vermont citizens.

This is a big issue in Vermont, which has nearly twice as many public employees per capita than neighboring New Hampshire. This statute says any citizen who threatens state elites for violating their oath of office can be imprisoned for twice as long as if one of those “public servants” threatened a parent or citizen. H.265 would penalize the political protester more severely than a public official who threatened to coerce money: “give me $100 or I will beat your face to a pulp” would carry only half the jail sentence as “you groom my kindergartner for sex any more and I’m going to smack you!” This is content-based government restriction, and it is unconstitutional.

The clueless drafters of this bill rushed to illegally silence Vermonters so quickly they left common sense at the door: there is no heightened penalty in Vermont for actually assaulting this list of government-protected political elites — 13 VSA §1023 provides only one year in jail for purposely causing bodily injury to another. It protects certain categories of public workers engaged in official duties, but the traitorous teachers and legislators undermining the constitution with their eugenics-like racism are not currently granted heightened protection from assault.

There are several dastardly miscreants in Vermont’s legislative midst, abusing their legal training to lie about the law. These are what I call “bad wizards” — they cast legal spells that they know full well won’t work or are in fact illegal. I aspire with my law degree to be a “good wizard,” arming the public with the law so that they may defend themselves.

As a good wizard, I must observe that for Vermont parents upset over the criminal indoctrination of their children by trusted government actors who are preying on them for ideological power, it would be legally preferable under the new law to physically beat them senseless as an expression of that view rather than to verbally threaten to do so. Under S.265, threatening to punch a teacher for betraying your child will soon carry twice the jail sentence and fine as actually pummeling them: political speech is being criminalized even more forcefully than actual assaults, in the New Age Vermont.