This commentary is by Jeff Euber, a writer who lives in Burlington.

Only days into the unfolding Covid-19 pandemic, the tech sector began work, with a conviction that seemed oddly premature, on the “vaccine passport.” The Covid Credentials Initiative launched a fully built website, with over 60 corporate and government partners, on April 12, 2020, preceded a week earlier by the Covi-Pass, “The World’s Most Secure Digital Health Passport.” Numerous others have sprouted in the year since, as the notion of proving immunity to Covid-19 — the supposed doorway back to normal — has gained legitimacy.

Acceptance may soon follow. The Biden administration, addressing concerns of government overreach, maintains there are no plans for federally mandated vaccine passports or a central vaccine database. But its commitment to working closely with the private sector to create standards could amount to a de facto mandate if passports are widely embraced. 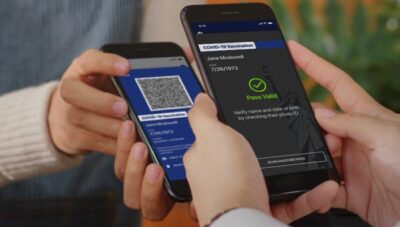 New York State’s Excelsior Pass offers a way to give digital proof of having received either COVID-19 vaccination or negative test results. It is billed as a type of “airline boarding pass” that will allow residents to attend sporting events, arts and more.

Therein lies a dilemma. Anyone familiar with the Nuremberg Code should recognize that vaccine passports, whether mandated by government or by business, are merely coercion behind a digital veil — effectively subverting a person’s right to informed consent. Yes, you can decline the vaccine, but that choice may ultimately banish you from a civilized existence. (What happens if you can’t find a grocery store that doesn’t require proof of vaccination?) In an ostensibly free country, having to choose between an experimental vaccine and life on the margins should be more terrifying than a virus with a 99.7% recovery rate (without a vaccine).

“But you don’t have the right to endanger others,” counter the passport advocates. This statement deserves a response.

The primary endpoint of the Covid-19 vaccine trials, according to Dr. Anthony Fauci, was “to prevent clinically recognizable disease,” not infection or transmission. If vaccinated people can still spread the virus — as shown by reports of “breakthrough cases” in the fully vaccinated — then passports are rendered meaningless. Conversely, if the vaccines are eventually proven to provide immunity, as a CDC study suggests, recipients can feel confident they are protected regardless of others’ choices. No passports necessary.

Another argument maintains that requiring proof of vaccination is nothing new, as seen with schools and international travel. However, there is a difference between proving vaccination status in specific circumstances — yellow fever, for one thing, has a much higher natural fatality rate than Covid-19 — and doing so just to engage in everyday life. Imagine having to “show your papers” to attend church, or ride the bus, or see your dentist. (The possibilities are legion.) If one only looked past the benign veneer of “the public good,” the Orwellian overtones are chilling.

Debate over vaccine passports has focused mainly on concerns about privacy and equal access. But larger questions demand answers: Are vaccine passports necessary, ethical, even lawful or constitutional? Where would this technology ultimately take us? Is this really about public health?

And yet the rollout races ahead: on international flights; in New York, where the Excelsior Pass now controls access to events, performances, “and more”; and in Los Angeles, where the Daily Pass is required for students despite their far higher risk of dying from other causes. Abroad, Israel’s Green Pass is already segregating that society — a possible preview of life in the U.S.

Israel’s developments are not lost on activist Vera Sharav. A Holocaust survivor, she suggests troubling parallels between vaccine passports and tactics used by the Nazi regime to divide and control German citizens. “Nazi propaganda used fear of infectious epidemics to demonize Jews as spreaders of disease,” she said. “[In Israel] the Green Passports are now being instituted to have an apartheid two-class society — one class privileged, the other reviled and discriminated against. Sound familiar?”

Social division could be just the beginning. In China, vaccine passports would fold into an existing system of electronic surveillance and “social credit scores” that dictate daily life. Could this happen in America? Even in a supposed democracy, vaccine passports offer a convenient platform for unprecedented control — especially considering the fascistic merger of state and corporate power euphemistically referred to as “public-private partnerships.”

Media claims that passports would be temporary don’t stand up to history. NSA whistleblower Edward Snowden warned, “A virus is harmful, but the destruction of rights is fatal. This is a permanent thing that we don’t get back” within “a culture of safety at all costs.”

The cost of vaccine passports, according to author Naomi Wolf, amounts to “the end of human liberty in the West.” Former Pfizer vice president Dr. Michael Yeadon said, “Vaccination protects those who need it. Vaccine passports protect nobody.” It is beyond worrisome that the framers of public perception, the media, have largely ignored and marginalized such voices pointing to downstream dangers of Covid-19 policies — as happened to critics of the Patriot Act following 9/11.

“Fifteen days to slow the spread” has mutated, incrementally, into an insidious threat to human rights having less to do with a virus than with technocratic opportunism. Vaccine passports represent not a “new normal,” but something profoundly abnormal. If we think passports herald light at the end of the tunnel, we might ponder the words of philosopher Slavoj Žižek: “Yes, and it’s another train coming towards us.”

8 thoughts on “Jeff Euber: Why vaccine passports are a one-way ticket to abnormal”