Gov. Phil Scott will do “whatever it takes” to ensure teens get driver education, he said at his press conference Friday.

“An old friend who is raising the 15-year-old son of her drug-addicted daughter said their school district won’t be offering Drivers Ed.,” Vermont Daily asked. “The DMV website says all 16 and 17-year-olds must pass a state-approved driver ed course. Could and would you without legislative action approve parents and guardians to conduct driver education?”

His answer was short on specifics but long on commitment. “We’re considering some of that,” Scott said. “We don’t know who will offer it and who won’t. I have an interest in this personally. We’re considering this, and looking into this, and will take steps to fill that need.” When asked “what steps?” he answered, “whatever it takes.” Secretary of Education Daniel French added that the State Board of Education last year considered waiving the regulations. AOE will act if necessary, he said.

In other education news, the governor’s office today confirmed Sept. 8 as the universal first day of school for the 2020-21 school year. Originally announced on Tuesday, the directive requires all public and independent schools to open for in-person or remote instruction on Sept. 8, with an exception for schools primarily serving students with disabilities, which can restart operations prior to Sept. 8. The secretary of education will have oversight and authority in the implementation of the order and local school officials and governing bodies are required to consult with, and abide by, the direction of the secretary of education.

Scott announced two new Covid-19 measures: beginning Saturday, he has increased the capacity limit on retail businesses from 25% to 50%. That decision goes hand-in-hand with his decision to require masks in all public places, including stores, beginning Saturday. Also the state of Vermont will begin distributing 200,000 free cloth masks to communities.

Scott said that “Thanks to the sacrifices” of Vermonters, Vermont still has the lowest number of cases nationwide. Only two Vermonters are now hospitalized for Covid-19. “We’ll continue to fight back until a vaccine is developed, which will in all likelihood be several months away,” Scott said. Vermonters must continue to be personally responsible to wear masks, wash hands, practice social-distancing, and stay home when sick, he said. 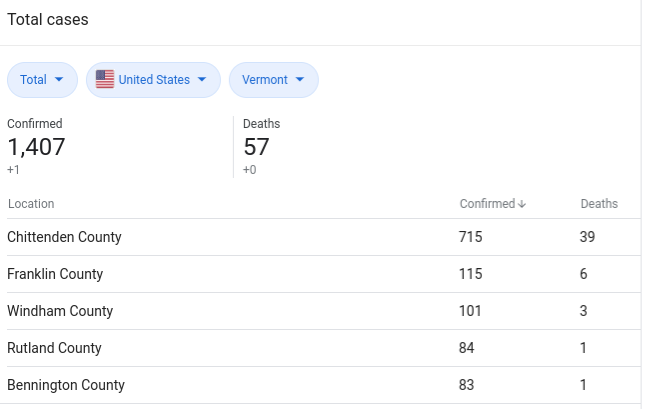 Nationwide, while daily Covid-19 deaths continue to top 1,000, new cases are down, Department of Financial Regulation Commissioner Michael Piecak said. The slowdown in cases is tied to reductions in the south and in Texas. However there is new case growth in the midwest and northeast. Rhode Island and New Hampshire this week showed the most growth in over a month.

Gov. Scott revealed just how much he relies on Commissioner Dr. Mark Levine for direction on all public health decisions related to the pandemic. “There hasn’t been anything he’s asked me to do that I haven’t done,” Scott told reporter Mike Donoghue of The Islander, who had asked about the administration’s decision-making process.

Scott said he has a small team of people with whom he makes the final decisions, including Levine, Human Services Secretary Mike Smith, and Piecak. Levine stressed that his recommendations put forth to the governor come after lengthy discussion with other advisers within the Department of Health.

One thought on “If driver ed falters, Guv ready to take the wheel”