Immigration and Customs Enforcement arrested fewer criminal illegal aliens than the prior year, an occurrence the agency blamed largely on sanctuary cities that refuse to cooperate with the agency.

ICE — the agency within the Department of Homeland Security (DHS) tasked with apprehending and removing illegal aliens — arrested roughly 13,000 fewer criminal illegal aliens in fiscal year 2019 than it did the previous year, according to data the agency released Wednesday. The chief of the agency placed blame, not only on the current border crisis, but also on jurisdictions that are choosing not to work with federal immigration authorities. 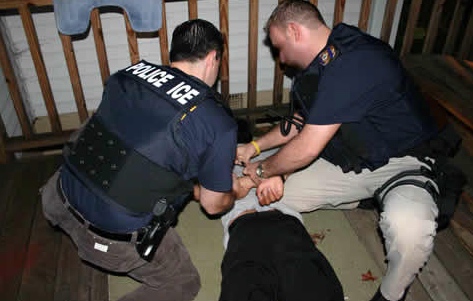 Immigration and Customs Enforcement (ICE) reported a drop in arrests of criminal illegal aliens and attributed the decline to the ongoing border crisis and a lack of cooperation from sanctuary cities.

“Unfortunately, some of our law enforcement partners have chosen not to cooperate with us when we have a unique capability to actually prevent crimes,” ICE Acting Director Matthew Albence said Wednesday during a conference call with reporters.

“We know that these individuals — if we take them off the street, if we take them out of communities, if we remove them from the country – those are crimes that are not going to be committed that they would have otherwise committed,” Albence continued.

Cities and other localities that are known as a “sanctuary” adhere to policies, either officially or unofficially, that hinder ICE’s ability to catch illegal aliens. This typically includes a refusal to honor ICE detainers — requests ICE makes to local authorities that ask them to hold onto an individual in their custody for no longer than 48 hours, allowing an ICE agent to arrive and make an apprehension. Sanctuary jurisdictions typically do not honor such detainers, allowing the individual to be released back into the community if they post bail, and these local authorities usually do not notify ICE of their release.

The proliferation of sanctuary cities, largely done as a backlash to the Trump administration’s tough immigration agenda, has left the agency with fewer local partners across the country.

The lack of cooperation had an affect of ICE’s ability to arrest criminal illegal aliens in the past fiscal year, with the total number of aliens the agency arrested dropping by almost 10% compared to fiscal year 2018.

“There is no doubt that the border crisis, coupled with the unwillingness of some local jurisdictions that choose to put politics over public safety has made it more difficult for ICE to carry out its Congressionally mandated interior enforcement mission,” Absence said in a separate press statement.

Albence made clear that the drop was also a result of the need to divert resources to the southern border, where a wave of illegal migrants appearing before agents on a daily basis overwhelmed DHS agencies. This did help overall southern border enforcement, with the government reporting that border enforcement actions increased 68% from the previous fiscal year.

In total, ICE’s Enforcement and Removal Operations officers arrested roughly 143,000 foreign nationals and deported over 267,000. Of those arrested, authorities charged and convicted thousands for homicide, kidnapping, sexual assault and other heinous crimes.