RANDOLPH, Vt. — About 300 people filled Judd Hall at Vermont Technical College on Tuesday evening to voice concerns about new gun legislation being proposed at the Statehouse.

The Senate Judiciary Committee listened in as more than 50 speakers, one by one, approached the table at the front of the hall to express their opinions.

The hottest topics of the night centered on S.22, a proposed 48-hour waiting period for gun sales and a mandatory safe-storage requirement for guns. 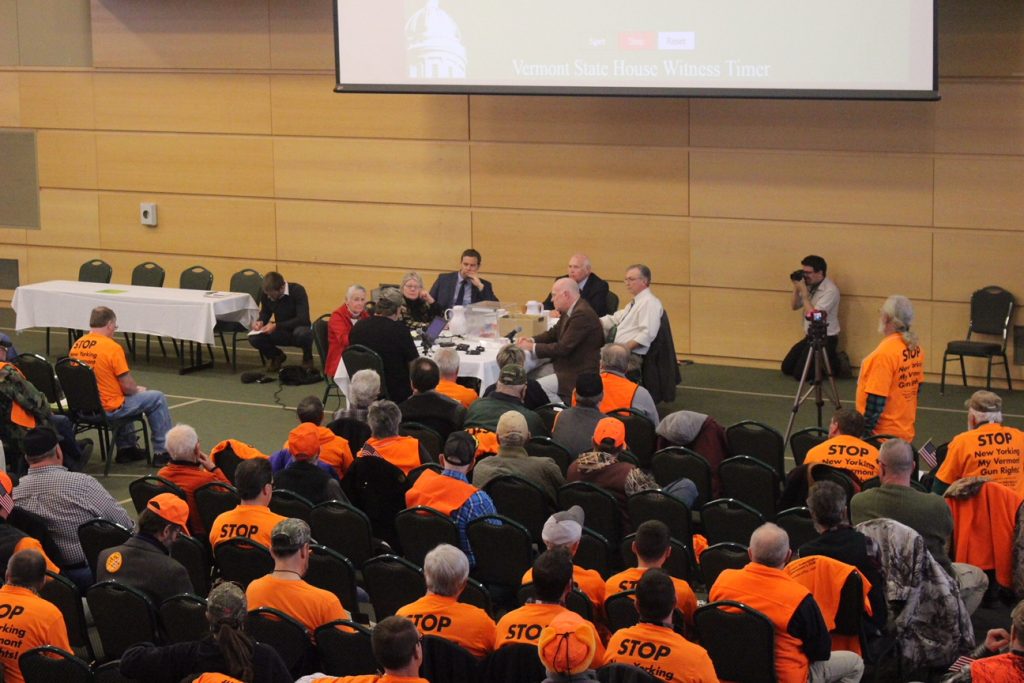 SEA OF ORANGE: Members of the Senate Judiciary Committee were surrounded by gun rights advocates as they heard public opinions on new gun-control proposals including a 48-hour waiting period and safe storage requirements for gun ownership.

Tabitha Armstrong, of Glover, spoke about how the waiting period and safe storage requirements will compromise her own safety.

“How am I to defend myself if someone was to break in if I’ve got to unlock my safe or load my weapon and remove a trigger guard in just a few seconds?” she asked. “As a woman and a mother, there are few times at home when I can comfortably and safely wear my firearm while completing other tasks.”

Roger Caroll, of Brattleboro, also spoke against the legislation.

“On the one hand I live in a state that allows physician-assisted suicide, and yet you are so concerned about gun suicides — so that’s a little odd right there,” he said. “Second of all, the safe storage has no provisions. How are you going to enforce that?”

Speakers were capped at two minutes each and drawn by lottery. The sea of orange shirts worn by audience members, representing support for gun rights, outnumbered those for gun control by at least a ratio of 3-to-1.

Evelyn Habermann, of Richmond, spoke in favor of the waiting period and gun-safe standard.

“Yes, people who are bent on committing suicide and have planned it for a very long time will wait the two days and they will still do it if that’s what they have the mindset to do,” she said. “But it will reduce the spontaneous acts that are done in the heat of the moment.”

Stephan Raynes, of Calais, who served in the Vermont House and Senate in the 1980s, mentioned the Black family, who lost their teenage son, Andrew Black, to suicide in December after he purchased a gun.

“I’ve seen the photo of Andrew at work on Dec. 3, 2018, looking relaxed and content — a guy I would enjoy talking with, hiking with, having a beer with,” Raynes said. “Three days later he bought a gun at 11:30 and he was dead at 4:00. I can’t but wonder if S.98 [a waiting period Raynes proposed decades ago] had become law, if Andrew would be alive.”

Last to speak was another concerned mother, Angela Sargeant, of Randolph.

“I’m a single mother with three young boys and I also live with my 82-year-old grandmother,” she said. “I am also a woman who has unfortunately been a victim of domestic violence, and I really ask you that women who are in these situations don’t have to wait 48 hours to defend themselves.”

Before the event, key lawmakers told True North some of the concerns they have about the bill, especially after a slew of controversial gun-control bills were passed last year.

“We heard a lot of testimony last year from folks who were claiming that every victim in a domestic abuse situation for the five days immediately after a break-up was the worst period of their lives for fear,” Sen. Joe Benning, R-Caledonia, said. “It seems to me that bill is running counter to what we heard last year.”

Sen. Mark A. MacDonald, D-Orange, said last year’s gun bills, which included background checks, magazine limits and more, may have been passed without the forethought that was necessary for good policy.

“I think the governor’s bill last year had some rough edges on it regarding the magazine limits, and inheritance, shooting contests, and things like that,” he said. “The committee is here trying to take some of those rough edges off and not have them be any more annoying than they’ve got to be.”

Also before the event began, shooting instructor and three-time House candidate Larry Hamel questioned what gun activists can expect from the committee.

“I think that the Democratic Party has got a set agenda and they are gonna push it through,” he said. “Whether they are gonna listen to us or not, I seriously doubt it.”

“We’ve got an ace-in-hole with John Rodgers — he’s definitely on our side,” he said.