By Zack Smith and Lora Ries | The Daily Signal

The rioting has nothing to do with free speech and peaceful protest. Peaceful protesters don’t loot. They don’t try to burn buildings while barricading the exits. And they don’t aim blinding lasers at police officers’ eyes.

It’s not enough to just protect federal buildings and those who guard them. Government officials, the private sector, civil society, and the media all have appropriate roles to play in protecting citizens and property.

Clearly, more needs to be done to restore order in these cities. Their recovery hinges on the restoration of public safety so that residents and businesses can get back to normal, productive day-to-day activities. 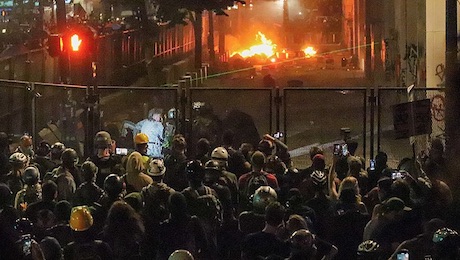 Jurisdictions that fail to develop and implement an effective action plan can pretty much resign themselves to many more months of criminal destruction and anarchy. Their law-abiding citizens expect and deserve much better.

Not surprisingly, the worst violence has occurred in cities where local politicians have at least tacitly supported the rioters. This is completely wrong-headed. Taking criminals off the street and restoring public order must be job No. 1.

And if those committing crimes are part of an organized group, their leaders and organizers, as well as those providing support or funding, should be investigated and held accountable as well.

The key to this is cooperation among all levels of law enforcement to protect citizens and property. Federal, state, and local authorities should work together to identify those committing crimes, to decide whether their actions violate state or federal law, and to indict those responsible.

The media has an important role to play as well. It’s not enough to simply stop characterizing violent riots as “mostly peaceful protests.” Accuracy and context are essential.

For example, many Americans do not know of the Marxist roots beneath the current riots. Thus, objective investigative journalists should examine and broadly report on the statements of the leaders of these groups, as well as their funding and training. It is vital that Americans know the truth about these organizations.

Obviously, there is much work to be done to stop the immediate violence and destruction, to prevent future anarchy, to inform the American public, and to restore the damaged communities. For that work to succeed, planning is essential. Those plans should encompass four major initiatives: protection, prosecution, communication, and recovery.

Protection: The first step is to stop the current rioting and prevent future riots. This will require beefing up the presence of supervisory law enforcement. With more commanders on-site, law enforcement will be better able to respond to changes in rioters’ tactics in real-time.

When federal officers are deployed to protect federal property, they should draw a line that rioters will not be permitted to cross, then hold that line with an overwhelming presence. It would be good, of course, to give local police the opportunity to protect their own city by holding that line themselves.

Law enforcement works best when departments communicate directly across jurisdictions. Local politicians in Portland and elsewhere, however, have thwarted such communication, endangering the lives of their constituents and endangering property.

The business of the federal government in cities where riots are taking place must continue.

Federal agencies and conscientious organizations should pressure local leaders to restore and maintain order near federal buildings to ensure access to the judicial system and federal services for their citizens.

If local leaders refuse to cooperate with federal law enforcement, then they should not receive future federal grants or discretionary funds for their cities.

Prosecution: Order demands accountability. Law enforcement and prosecutors must investigate, arrest, and indict those who violate state or federal law. Those who train, fund, materially support, or facilitate those found guilty should also be investigated and prosecuted if they, too, broke any laws by doing so.

Rogue state prosecutors who refuse to prosecute criminals should be called out. And, again, jurisdictions that refuse to cooperate with federal officials should no longer receive federal grant money—especially grants earmarked for law enforcement purposes—until they enforce the law as written in a fair and even-handed manner.

Communication: The media has a responsibility to objectively report the facts so that the American people can see for themselves what is happening in Portland and elsewhere and decide whether such lawlessness should be tolerated.

If the mainstream media continue to portray rioters as “peaceful protesters” and blame their violence on the presence of federal officers, the record must be set straight.

Law enforcement officials, prosecutors, and community leaders should conduct briefings, present eyewitnesses, and release video footage to show what is truly happening on the ground.

Recovery: Once the streets are safe, municipal and state officials can refocus on addressing the ongoing public health crisis and citizens can begin to rebuild their own communities.

To accelerate clean up and rebuilding, states and localities should remove as much red tape as possible to help businesses, residents, and schools resume operations.

Jurisdictions that fail to develop and implement an effective action plan can pretty much resign themselves to many more months of criminal destruction and anarchy. Their law-abiding citizens expect and deserve much better.

5 thoughts on “How to stop targeted violence in US cities”