By Hans von Spakovsky and Greg Walsh | The Daily Signal

The supporters of open borders and sanctuary policies that obstruct enforcement of our immigration laws must be overjoyed by the latest report from the Department of Homeland Security.

The Border Patrol intercepted more than 144,000 illegal aliens at the southwest border in May, the largest monthly total in more than a dozen years.

Those who push these policies should be ashamed of themselves. 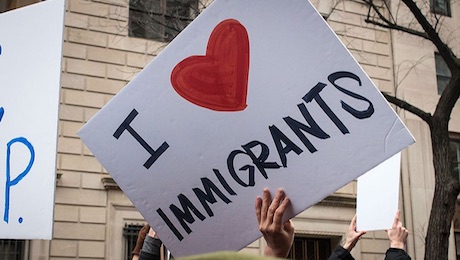 There are literally hundreds of thousands of individuals who are being killed, raped, assaulted, robbed, beaten, and kidnapped by criminal illegal aliens in this country, aliens who are protected by sanctuary jurisdictions.

As a gruesome murder in Maryland of a 14-year-old girl demonstrates, they are allowing dangerous criminals into the country and are creating sanctuaries for them to repeatedly victimize Americans and endanger the safety of the public.

There are literally hundreds of thousands of individuals who are being killed, raped, assaulted, robbed, beaten, and kidnapped by criminal illegal aliens in this country, aliens who are protected by sanctuary jurisdictions, such as Prince George’s County, Maryland.

In one of the latest tragedies caused by these reckless policies, on April 18, Ariana Funes-Diaz (who went missing from a group home for girls) was forced to strip and was then beaten with a baseball bat, slashed with a machete, and slain.

Three teenagers are in custody, accused of this heinous crime, at least two of whom are in the country illegally and are self-identified members of the notorious MS-13 gang, which has plagued citizens across the continental United States. One of them came through the refugee resettlement process.  A fourth accomplice, who actually recorded the atrocity, was just recently arrested.

There is little doubt that Funes-Diaz would be alive today if it weren’t for the sanctuary policy of Prince George’s County. The two illegal aliens (Salvadoran nationals) accused of her killing were previously arrested on charges of attempted murder, participation in gang activity, conspiracy to commit murder, attempted robbery, and other related crimes.

Immigration and Customs Enforcement sent detainer warrants to the Prince George’s County Corrections Department over a year ago asking it to notify ICE when the aliens were scheduled for release so ICE could pick them up for deportation.

But because of the county’s irresponsible sanctuary policy, the ICE detainer was ignored, and the illegal aliens—members of one of the most dangerous criminal gangs in the Western Hemisphere—were blithely released back into the community so they could commit further crimes.

As Justine Whelan, an ICE spokeswoman, said, “It’s hard to imagine that anyone would not be interested in ensuring that people like this are not on the streets, doing bad things, after demonstratively violent behavior.”

But Prince George’s County is unapologetic about the brutal slaying that happened as a result of its policy. Its director of corrections, Mary Lou McDonough, was defiant over the county’s sanctuary policy, telling The Washington Post that ICE knows that “we will never hold anybody for ICE.”

The location of Funes-Diaz’s killing is a tragic, telling element. Had she lived just a few miles south in Prince William County, Virginia, the killers would probably not have been in the country, due to their prior crimes.

Prince William County has an agreement with the Department of Homeland Security (and by extension, with ICE) through the 287(g) program, which checks the immigration status of arrestees and detains them for ICE to pick up and deport.

Despite its success, the future of the program there is in peril, as the two Democratic candidates for sheriff running against the incumbent, Glen Hill, favor eliminating the program.

The Prince William Board of County Supervisors chairman, Corey Stewart, said the program has been successful in curbing further criminal activity among illegal aliens.

He warns that “[i]f the county rescinds 287(g), MS-13 comes back with a vengeance, because it will send a big signal that the county will turn a blind eye to criminal illegal-alien gang activity.”

Unfortunately, there is nothing isolated about what happened to Funes-Diaz.

A 2005 report by the Government Accountability Office on the criminal histories of 55,322 illegal aliens in prison showed that they had been arrested 459,614 times for some 700,000 criminal offenses.

A 2011 GAO analysis found that 251,000 criminal aliens in federal, state, and local prisons and jails had been arrested nearly 1.7 million times for close to 3 million criminal offenses ranging from homicide and kidnapping to drugs, burglary, and larceny.

In January 2018, Rio Grande Valley Sector Chief Patrol Agent Manuel Padilla Jr. noted that the Border Patrol had “apprehended 53 MS-13 gang members,” which represented “an increase of 212 percent over the same period in 2017.”

A teenage girl was killed in cold blood fewer than 15 miles from the Capitol, and still Congress is incapable of working with the White House to combat this scourge of lawlessness.

Furthermore, counties and cities in Maryland and elsewhere not only refuse to assist federal authorities in their efforts to get dangerous criminal aliens out of the country, they implement policies intended to obstruct and interfere with those federal efforts, endangering the residents of their communities.

The killing of Funes-Diaz brings to mind another tragedy, the 2015 slaying of Kate Steinle by an illegal alien, previously deported five times, who was released due to the city of San Francisco’s sanctuary policy despite an ICE detainer warrant.

The Remembrance Project, “a voice for victims killed by illegal aliens,” was welcomed at the White House in June 2018 for its work in trying to help the families of those victims.

Anyone who doubts the effects of open borders and sanctuary policies should visit the Remembrance Project’s Twitter account, where you will be immediately confronted with the heartbreaking frequency of killings committed by a growing population of criminal illegal aliens.

President Ronald Reagan once noted “a nation that cannot control its borders is not a nation,” a comment that encapsulates the political and cultural issues resulting from the virtually unimpeded stream of illegal aliens coming across America’s southern border: abandonment of law and order and public safety, and huge economic costs imposed on local communities.

There is one thing we know for sure. There are many Americans who would be alive today if we had control over our southern border and if there were no sanctuary policies in place.