BURLINGTON — Top green activist lawmakers got together Wednesday night for a public discussion on the status of environmental legislation passed in Vermont, as well as goals they would like to see pursued next year. The event was hosted by the Sierra Club. 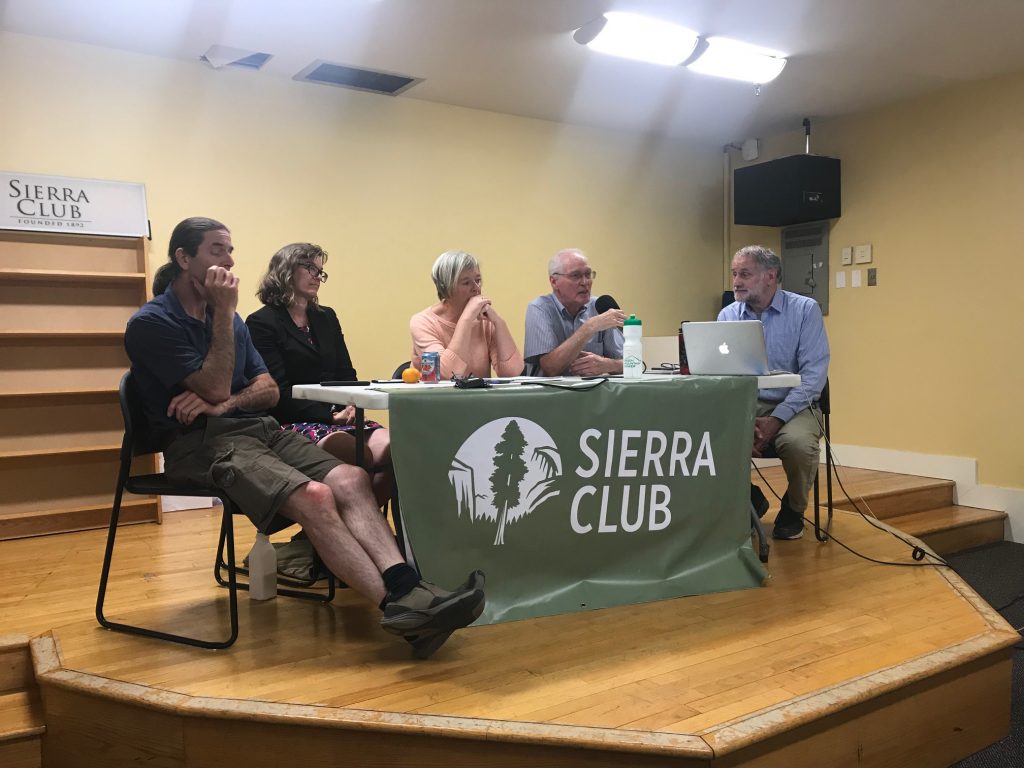 TEAM GREEN: Democrat and Progressive lawmakers are pushing some of the most ambitious green agendas including enforcement of green energy goals, a wealth tax and more.

The general feeling among the panel members was that while tangible progress has been made around electronic vehicles and weatherization, stronger measures should be taken in the next legislative session to address what they perceive to be an imminent climate crisis.

“I’m sure you’ve all heard about the dairy farmers are struggling and vegetable farmers with the rains we’ve had until this last week. So it’s all related and it’s all right now,” Zuckerman said. … I can tell you these last three rainy springs and last summer’s draught up here and the incredible rains down south, these patterns are not the normal patterns we’ve been having.”

With Vermont being one of the most rural states in the nation, addressing emissions from the transportation sector is a challenge. This year the governor approved $1.5 million to subsidize new electric vehicle purchases, which the panelists said is not enough.

“It’s only for moderate income people. If you are in the end [of the eligibility bracket] it’s 160 percent of the median income in the region, and if you make more than that then you are not eligible for this at all,” McCormack said. “It’s not for people that can afford them at all and it may not be enough. It’s only $2,500 or $5,000 depending on your income. The $1.5 million, our committee felt, is nowhere near enough.”

According to Energysage.com, the average starting cost for popular EV models begins at around $20,000-$30,000; higher end brands can be $60,000 and up. These prices are estimated after accounting for a $7,500 federal tax credit.

The panelists would like to see adoption of EVs at around 15 percent, which they believe would bring vehicle costs down.

Sullivan said she is disappointed that a carbon tax hasn’t been approved by the Legislature. She suggested that opponents of the tax are misleading the public on the issue.

“The misinformation campaign was like nothing I’ve ever ever seen before. This information comes directly from the Koch brothers and ExxonMobil,” she said. “And some of these people come screaming in that you have to not go for a carbon tax, and I stop them and talk about it and they don’t quite know what they are talking about.

“So that’s very disheartening, and it’s difficult when some legislators felt they could never get elected in the first place if they said they were going to support a carbon tax.”

Zuckerman suggested that instead of directly taxing the consumption of carbon-based energy — which at least one study suggests could have bad results for income sensitive Vermonters — a better approach would be to tax upper-income citizens and then use those funds for green initiatives. He added there is a consistent correlation between the rise of carbon emissions and the rise of wealth inequality.

“That actually took my mind going from carbon tax to a wealth tax and having it be related because, frankly, as our climate is being destroyed our economic livelihood for everyday people is being destroyed,” he said. “And so we need to take those resources and bring that back into the infrastructure, transportation in particular.”

Colburn talked about the Global Warming Solutions Act, a proposal that would use enforcement mechanisms to force a shift towards renewable energy goals.

She explained that regular citizens would be able to go to court and seek “an injunctive relief,” and then the court can order the entities in question to “get back on track.”

Panel members also discussed utilizing youth movements to advance green energy policy at the Statehouse, increasing the weatherization of homes for energy efficiency, and exploring mass transit options including the revival of a rail system.