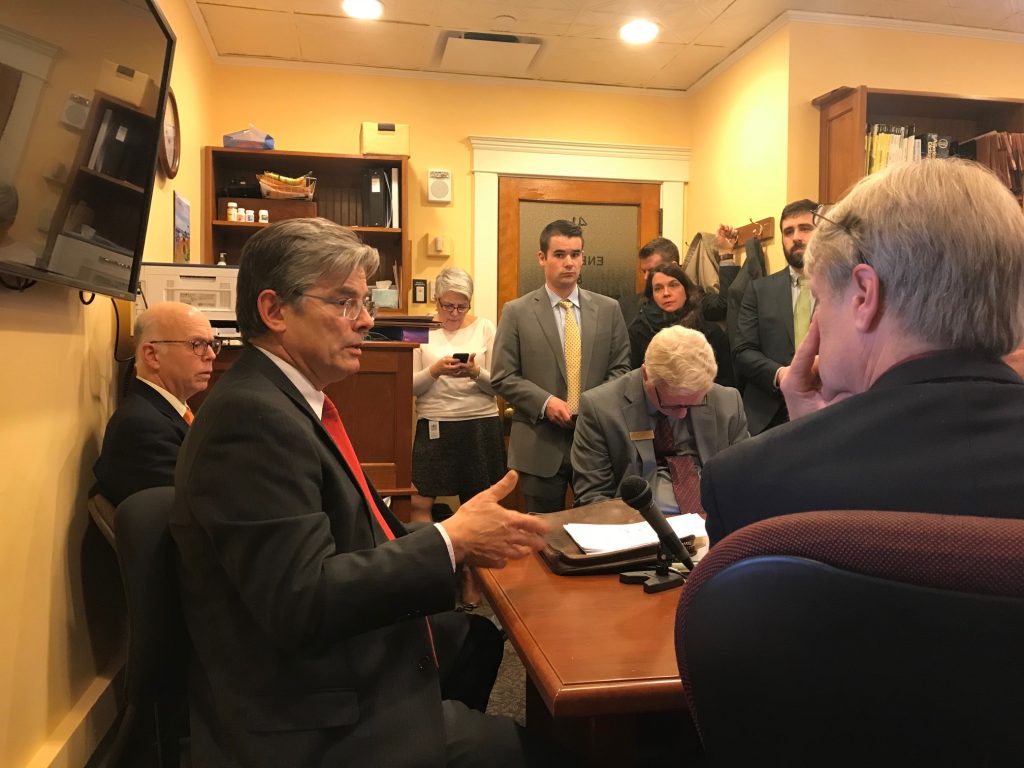 CARBON TAX IS BACK: David Farnsworth, senior associate of the Regulatory Assistance Project, shared his thoughts with the House Education Committee on how a carbon tax could work for Vermont.

MONTPELIER, Vt. — The House Energy and Technology Committee on Tuesday heard again why Vermont needs a carbon tax, this time from David Farnsworth, senior associate of the Regulatory Assistance Project.

The anti-fossil-fuel proposal, H.791, is modeled after the ESSEX Plan and aims to tax carbon-based fuels and pass the revenue on to electric utilities.

Farnsworth told the committee carbon-tax schemes have been done successfully elsewhere and therefore should be strongly considered for Vermont.

“There are over 40 countries that put a price on carbon and there are others working on it all the time,” he said. “The Regional Greenhouse Gas Initiative [RGGI], which is a cap-and-trade program for the electric sector [for] nine northeastern states, is an example of this.

“It teaches us that putting a price on carbon is only part of the deal; the other very important part where you get a lot of traction is in investment associated with it.”

But when Farnsworth made various claims about the RGGI program’s positive economic impact, state Rep. Corey Parent, R-St. Albans, asked for details over the numbers.

“You spoke briefly when you were talking about RGGI, how in the first year they raised $1 billion and got $1.6 billion in benefit out of that,” Parent said. “Can you quantify how you calculated 1.6, because every organization that comes in here tells us that every dollar we invest has been getting this kind of return.”

Farnsworth stated that the numbers come from the RGGI program, but added that he thought such high returns may come from investing revenues into improved efficiency efforts such as new insulation and cold-heat pumps for homes.

Parent also questioned how the tax would change the energy use habits of Vermonters.

“Programs like switching to electric vehicles, replacing windows, replacing furnaces, replacing roofs — those are all expensive ticket items,” Parent said. “It speaks to the price and the elasticity of energy; none of us are going out to replace a car tomorrow if gas costs a dollar more a gallon.

Farnsworth said it would take time for new efficiency items to proliferate the market, but when they do the prices come down and the need to subsidize dissipates. He pointed to LED lighting, which used to be more expensive than conventional light bulbs, but not so much anymore.

“Efficiencies are not easy to sell … [but] they save money.”

Rep. Warren Van Wyck, R-Ferrisburgh, expressed concern about Vermont doing a carbon tax on its own, since it’s such a small state with no impact on global CO2 levels.

“I’d be very concerned about Vermont going it alone on this because of the proximity of other states. … I don’t see how this bill addresses those concerns,” he said.

Farnsworth said this is what they call “leakage” in economics. “When you cap here, we just all run over here and do business over here and then come back and live under this cap,” he said.

Again referring to the RGGI program, he said the cost of electricity is “a little bit more expensive” than neighboring states, but the leakage has been minimal.

“And I think you haven’t seen it because it’s a modest program.”

For 2017, the added cost of carbon for the RGGI program was $2.15 per ton, according to the U.S. Energy Information Administration.

There have been analysis reports of RGGI’s total economic impact, which covers one-sixth of the U.S. population. While a couple of reports make the claim that RGGI results in a net economic benefit, they do confirm that electricity users pay more since its implementation.

The report goes on to state that carbon emissions have dropped, and further claims that all of the costs have been returned to the economy “in a myriad of ways,” most of which are green energy initiatives. A portion goes directly back to low-income energy users.

Another report by Georgetown University admits that the costs to the power suppliers were made up by money from customers.

“Generators recover all of their early allowance expenditures through the increase in electricity
prices during the 2009–2011 period,” reads the report.