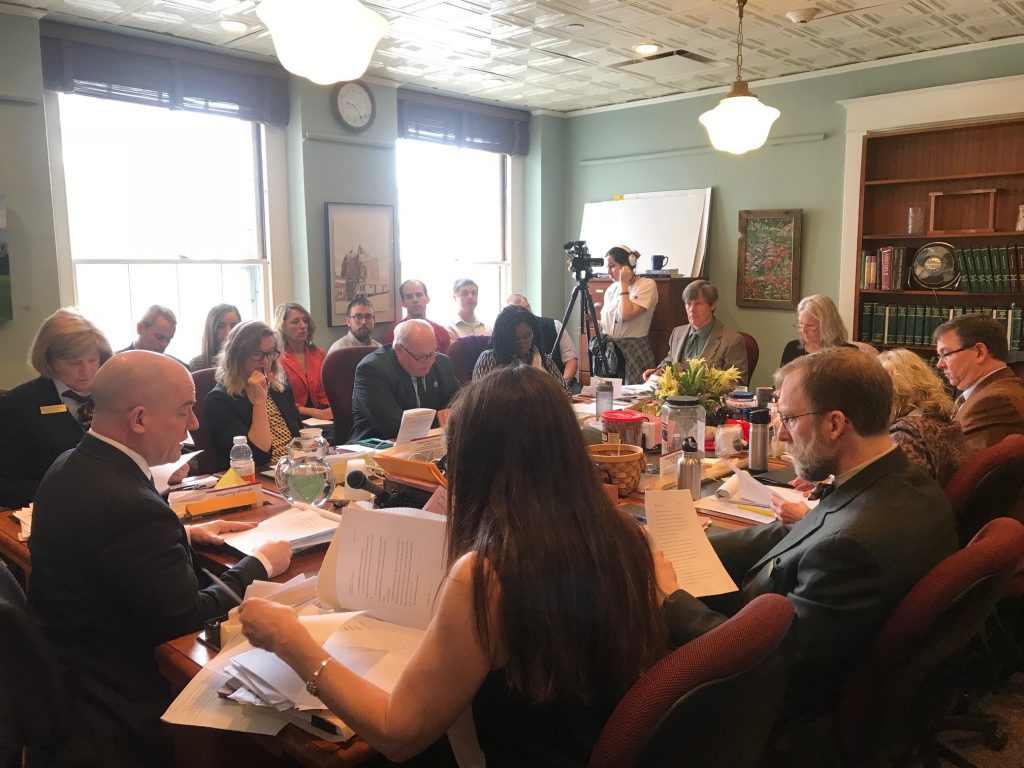 GUN CONTROL PUSH: Wednesday morning wrapped up the House Judiciary’s time on S.55, which includes universal backgrounds checks, magazine limits and more. The committee approved the bill by a 6-to-5 vote.

MONTPELIER, Vt. — Just days after Vermont’s pro-gun coalition issued a joint complaint to House leaders regarding a lack of accessibility to lawmakers, the House Judiciary Committee on Wednesday passed S.55, which includes a handful of significant restrictions on Second Amendment rights.

Lawmakers approved the bill on a 6-5 mostly party-line vote, with just committee Vice Chair Rep. Charles Conquest, D-Wells River, crossing party lines to join Republicans in voting against the measure. While the underlying bill concerns what to do with police storage of confiscated guns, key amendments include universal background checks for private sales, a limit on magazine capacity to 10 rounds, an age limit of 21 for gun purchases and a ban on bump stocks.

A joint letter written this week by the Vermont Federation of Sportsmen’s Clubs (VTFSC), the Vermont Traditions Coalition (VTC) and Gun Owners of Vermont expressed concerns that opponents of S.55 weren’t getting their calls and emails through to lawmakers at the Statehouse. According to the letter, constituents have repeatedly attempted to contact representatives but the messages aren’t getting delivered in a timely way.

Evan Hughes, vice president of the Vermont Federation of Sportsmen’s Clubs, told True North on Tuesday morning that he spoke with legislators from the Judiciary Committee who had not received the list of phone calls that they usually get on a daily basis. The letter explains the details.

“In talking to the Sergeant at Arms Office, we believe we understand that these ‘Call log sheets’ are theoretically being disseminated to House Judiciary — but we have learned from some members of that committee that they are not seeing these ‘call log sheets’,” it reads.

Later in the day, Rep. Tom Burditt, R-West Rutland, showed True North that he had gotten his copy of the list that morning, but it included calls on it from up to eight days ago. Of the more than 100 calls on the list, all but one urged a no-vote on S.55.

Hughes said were it not for the letter and a visit to the sergeant-at-arms office, the list may still have not been delivered. He added that the whole debacle leaves suspicion and distrust among the coalition’s members.

“They see this as a selection of the people who are opposed to this as being completely cut off from contact with our legislators,” he said. “ … We’ve gotta make sure it doesn’t happen again.”

Phone calls were not the only problem regarding communication troubles. There continues to be concern that emails are not being received properly.

“Regarding Email, we have been made aware that some emails from our constituents are apparently being directed to individual legislator’s SPAM folders when ‘SPAM Engines’ are not being used by any of us for contacting Legislators,” the letter reads.

“We found out from legislators that, I think somebody looked at their spam folder and he saw they were going there,” he said. “And then we had multiple people check and that proved to be the case.”

He said he had technology people reach out to the Statehouse, any they whitewash the emails, which means they allow them to come through from a certain address. Goens said having that gap in communication was critical timing considering the weight of these new gun-law proposals.

“There was a lot of communication that was missed at a critical time and that’s why we are calling for a public hearing on S.55 to guarantee those gun owners are heard,” he said.

Meanwhile, the coalition would like to see some public hearings on S.55, which originated as a bill to deal with storage of guns. In addition to the current restrictions in the bill, other initiatives originally included in S.55 got spiked before the measure passed out of committee. One such amendment was a ban on semi-automatic “assault rifles,” which failed due to a lack of agreement over the types of guns meant by the term.

Bill Moore, a firearms policy analyst with the Vermont Traditions Coalition, told True North on Tuesday afternoon that he doesn’t think that anything is completely off limits.

“All of the amendments, the gun bans that have been discussed in House Judiciary, as far as we’re concerned, they are still on the table,” he said. “… On the House floor anyone can pick up those pieces that they removed from the bill and propose to amend them back in.”

Moore emphasized that what the coalition is working on now is getting public hearings on S.55. He said this is the most public interest shown on any bill at the Statehouse since civil unions passed in 2000.