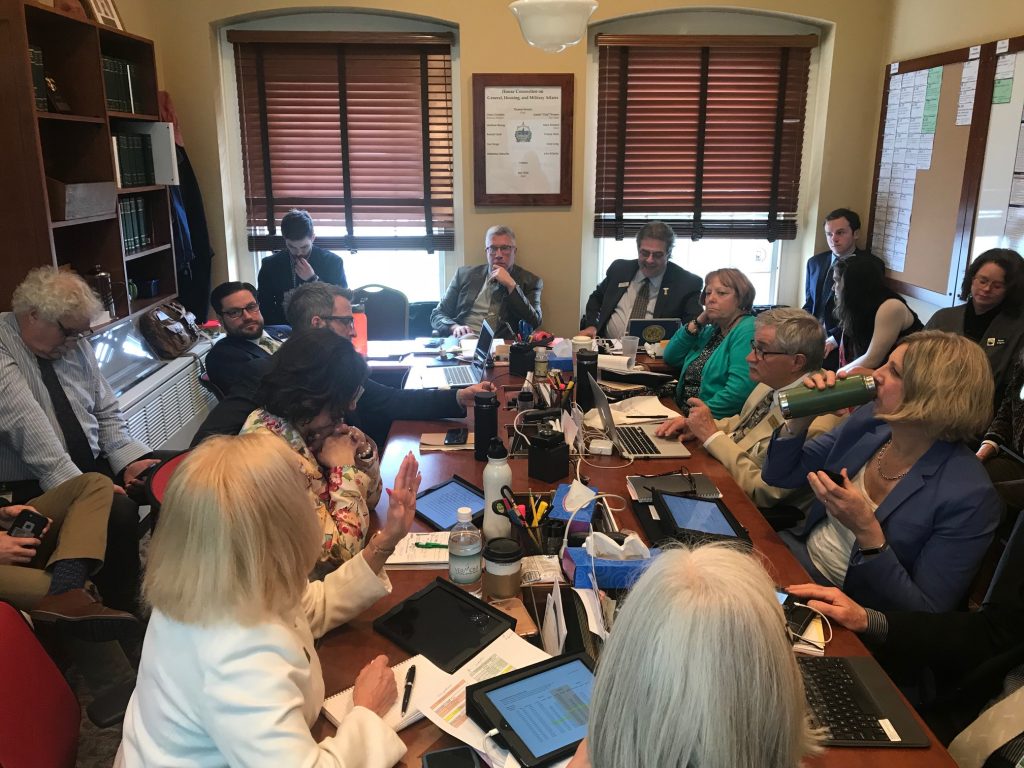 GETTING HEATED: Discussions grew tense at points as members of the House Committee on General, Housing, and Military Affairs debated whether to have a cap on the percentage that the minimum wage can be allowed to go up annually.

MONTPELIER — The General Housing and Military Affairs Committee on Friday voted 7-3-1 to approve the Senate-passed $15 minimum wage by 2024.

Committee members spent a fair amount of time discussing a proposal to stretch out the implementation of the wage a few years beyond the 2024 target set by the original Senate bill.

Rep. Matt Birong, D-Vergennes, proposed that instead of fixed increments starting next year and working up to $15 in 2024, the rise would be tied to the Consumer Price Index (CPI) and then multiplied by 2.5. This would mean whatever the rate of inflation for the year, that percentage multiplied by 2.5 is the amount the minimum wage would rise for the next year.

A key component of this proposal was for a 5 percent cap, meaning if the CPI multiplied by 2.5 is more than a 5 percent increase, that’s where it stops. A cap already exists with the current minimum wage law.

That compares to data which indicated the progression towards a 2024 $15 minimum wage, as passed by the Senate, is estimated to rise at 6.5 to 7.5 percent per year. After the committee disbanded, Birong told True North that constituents are telling him the increase is too fast.

“[It’s About] 7 percent a year with nothing taken into consideration for an economic downturn. A lot of business owners, including those that support concepts like family leave and paid sick days, they were coming to me with a lot of concerns about the timeline,” he said.

An uncontested feature of Friday’s discussion was that the goal is to get the wage up to what would be considered a “livable wage.” In a prior session the idea was strongly contested by Rep. Marianna Gamache, R-Swanton, and Central Vermont Chamber of Commerce President Bill Moore.

When it came time to make a decision on Birong’s proposal, Rep. Joseph “Chip” Troiano, D-Stannard, noted that he’s OK with the 2.5 CPI measure but not the 5 percent cap.

Gamache protested that a cap is necessary.

“You can’t do something like this without a cap,” she said. “There are two parts to this equation: There are the workers, the employees who need to earn a living, and then you have the employers, be it private or state, that are the suppliers of the money. You cannot talk about one without the other.”

Troiano noted based on current economic trends he does not foresee an immediate economic crisis that would accelerate inflation in the near future.

“You can predict based on the past and say that it’s unlikely according to these figures that we will arrive or bump a 5 percent cap in the next six years,” he said.

Gamache agreed with that assessment but continued to advocate for a better-safe-than-sorry approach.

“That’s not a given; there are strange things that happen, and if you lock yourself in without any kind of flexibility, that’s gonna be a huge problem,” she said.

Rep. Lisa Hango, R-Berkshire, indicated she also thinks there should be a cap.

“Another part of this is that I highly doubt the cost of goods is gonna go down, or the cost of services or transportation,” she said. “I just feel like we really need to contain this somehow. I’m concerned for employers.”

While there was no formal vote on the proposal, Rep. Mary Howard, D-Rutland; Rep. Tommy Walz, D-Washington; and Rep. John Killacky, D-South Burlington, each indicated that they prefer the Senate’s original timeline for a progression to $15 an hour by 2024.

The committee ultimately decided to vote on the bill after lunch with the Senate timeline for $15 minimum wage by 2024.