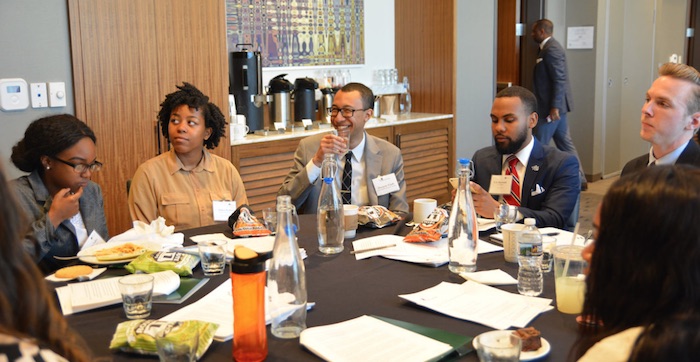 Interns from the Gloucester Institute and Heritage Foundation meet for policy discussions on March 23, 2019.

By Marc DeJager | The Daily Signal

America is divided. Nobody is listening to anyone else. All we want to do is have our own cognitive biases confirmed.

America is doomed to an ideological civil war along racial, sexual, class, and religious divides. The best we can do is retreat to our own ideological bunkers and brace for the coming war.

There’s nothing we can do to stop it. Or is there?

I’m sure you’ve heard this kind of naysaying before, and to be fair, it’s not entirely unfounded.

There are certainly significant divisions in our political landscape, more so than there have been in many years. But that has more to do with the rise of “outrage culture” on both the right and the left than it does with inherent deep divisions among Americans.

Ironically, it is often the people who yell the loudest about our terrible division who are the very same thought leaders who push increasingly rigid and uncompromising ideologies.

It has become quite popular to decry today’s division with one hand and fight viciously for one’s own team with the other. Being an ideologue is sexy at the same that decrying our deep divisions is fashionable.

But are these grim depictions really indicative of mainstream American culture? Or even of the so-called future intellectual elite?

A few weeks ago, I joined about a dozen of my fellow interns at The Heritage Foundation’s Young Leaders Program to meet with a group of interns from the Gloucester Institute’s Emerging Leaders Program, a program designed to strengthen the communications skills of young Latino and African-American college students.

We entered into a conversation about race relations, the state of the black community in America today, and what we as the future leaders of America should do to help communities that are struggling.

This past weekend, we met again, this time at a hotel convention center in Arlington, Virginia, to continue our conversation. Specifically, we focused on policy solutions to problems in health care, school choice, and criminal justice.

The first thing I personally noticed was how warmly both groups greeted each other. We remembered students from the other group, and we were all happy to see each other again.

The dialogue got underway much more quickly this time, as we dove right into discussions about how we as young Americans should fix the problems we see in today’s society.

School choice is an issue that Heritage sees as vitally important for the betterment of low-income communities, especially in large cities.

Heritage’s stance on this issue is very clear: We think that the more choice parents have in where their children attend school, the better off those children will be in the long term.

“We concluded that the federal government cannot possibly know what is best for individual students and that only parents truly know what best suits their child,” she said.

If you talk to advocates or even staffers on Capitol Hill, they would have you think that school choice is a partisan issue. Clearly, that isn’t always the case. Young leaders on both the right and left can agree that the choice of where students attend school should be left as much as possible to the parents. 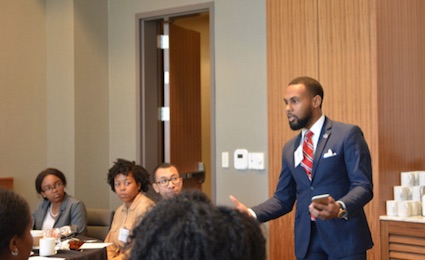 The participants shared policy insights in between group discussions.

I engaged in a lengthy discussion about health care, and how we as conservatives and liberals alike should proceed to ensure that the system we put in place is both fair and effective.

This conversation was sparked and guided by stories. We all told of our own experiences dealing with the American health care system, both for our own needs and for the needs of loved ones.

We were unable to reach as neat a consensus as the school-choice group, but we were still able to come to a few points of commonality.

First among them: Individuals have widely varying levels of need when it comes to health care. I am a healthy male in my early twenties. I can expect to need to spend far less on health care than my grandfather, who is in his eighties.

On the other hand, one of the Heritage Foundation employees participating in our conversation pointed out that she has a pre-existing heart condition, which requires her to pay thousands out of pocket even after insurance.

Any system of assistance must be built in such a way as to be flexible enough to accommodate the varying needs of all Americans. We also agreed that the current system is too slow, too complicated, and not transparent enough.

These are specific concerns that can be targeted and addressed through legislation.

Emerging thought leaders on both the right and left were able to come to agreement on these issues after only a two-hour lunch. Imagine what we could do with six years in Congress.

If there is a message of hope, it is this: As divided as America may sometimes seem, we have far more in common than we think. Despite our disagreement, we are all Americans.

Despite the dire words of talking heads on national television, after our conversations between The Heritage Foundation’s Young Leaders Program and the Gloucester Institute’s Emerging Leaders Program, I firmly believe that the future of America’s politics is not just hopeful, it may even be bright.

Image courtesy of The Heritage Foundation

One thought on “Despite differences, civil discourse is still possible”