This commentary is by state Rep. Mark Higley, a Republican from Lowell who represents the Orleans/Lamoille House district. Note: The Agency of Natural Resources approved the California II rule approved before Thanksgiving 4-2.

Vermont’s Global Warming Solutions Act gives statutory authority for rulemaking to the Agency of Natural Resources. The secretary of that agency has until Dec. 1, 2022, to adopt rules to meet the 2025 emissions reductions requirements in the Vermont Climate Action Plan. 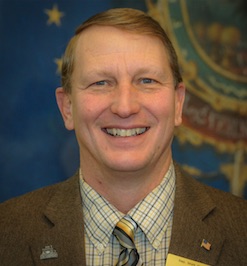 I believe Vermont does have the option and should revert to the federal standards.

I believe the Global Warming Solutions Act has given overly broad authority to the agencies, as well as to the unelected Climate Council. The mandates and benchmarks (not goals) for carbon reduction do not allow for the many variables that come up along the way. A pandemic, recession, depression, war and other variables need to be considered when making legislative decisions.

Starting in 2026, automobile manufacturers will have to supply more and more electric vehicles and by 2035 only electric or hydrogen vehicles will be able to be sold in Vermont. Even if other states don’t have this requirement and you purchase out of state, the Vermont Department of Motor Vehicles will not allow a nonconforming car to be registered here in Vermont.

It appears that, of the 17 states that were going to follow California’s clean car standards, Colorado in particular and maybe Pennsylvania have decided to bow out. Vermont is not like California in its geography or climate.

There are currently a number of issues in California with trying to achieve the standard: There are severe pressures on its electric grid, with Gov. Newsom asking residents to turn their thermostats up to 78° this summer; inadequate funding for incentives and rebates for low-income residents; charging stations are mostly in urban areas, leaving inadequate charging for renters and in rural areas; General Motors explaining supply chain issues make it hard to meet demand; a short supply of electric vehicles is driving up costs.

Environmental justice groups have said that reliability of the electric grid is of concern, but it’s up to the Public Utilities Commission to find the generation.

What about our reliable grid concerns in Vermont? During our hot stretch this summer, Vermont Electric Co-op created a “Defeat the Peak” campaign, asking consumers to not use certain appliances during certain hours. More recently, the co-op has asked for a 10% increase in its rates.

Where will Vermont’s electric companies get reliable power, considering such mandates, and what of the cost to consumers? At a meeting in September, members of the Federal Energy Regulatory Commission stated concerns on whether ISO New England will have the ability to run its gas-fired generation plants because it won’t have enough fuel this winter.

Because of Vermont’s overly ambitious benchmarks, how will we deal with the reduction of revenue from our fuel tax? Twenty-eight percent of Vermont transportation revenue comes from the fuel tax. In 2019, this amount was $77.8 million.

An average vehicle using 600 gallons a year would realize the state $180 in gas tax. Electric vehicle advocates say we should not impose such a fee on new EV owners for incentive reasons. If we are headed down this road, we should consider such a fee because all users of our highway infrastructure should contribute.

These are very real concerns that we, as legislators, need to realistically consider and work through together with all involved. Just considering carbon reduction benchmarks by the unelected Climate Council is not being realistic. This year alone we will invest $215 million on climate change initiatives like weatherization, the municipal energy resilience grant program, advanced metering infrastructure and electrification initiatives.

Images courtesy of Wikimedia Commons/Erum Patel and state of Vermont