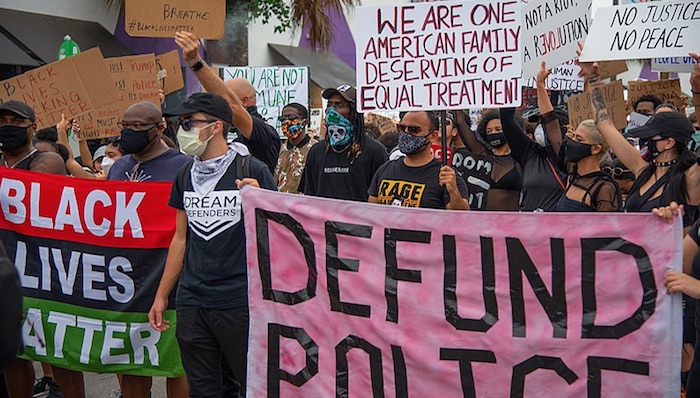 DIDNT’ WORK: The defund the police movement is largely seen today as a massive policy failure across the nation. Now Vermont students say there still needs to be more attention given to racism in Vermont policing, housing and more.

The 2022 Racial Equity Report put together by the Vermont Student Anti-Racism Network was presented to the public during a Zoom presentation last Monday.

The report calls for reforming housing policies to address discrimination, including policies that use race to prioritize both housing and medical resources.

The report begins with a statement by Ta-Nehisi Coates from his book “Between the World and Me,” in which the author appears to equate racism with physical violence:

All our phrasing — race relations, racial chasm, racial justice, racial profiling, white privilege, even white supremacy — serve to obscure that racism is a visceral experience, that it dislodges brains, blocks airways, rips muscle, extracts organs, cracks bones, breaks teeth. You must never look away from this. You must always remember that the sociology, the history, the economics, the graphs, the charts, the regressions all land, with great violence, upon the body.

Section 8 of the report includes survey results on social issues from Mount Anthony Union High School. This included questions such as “Have you ever experienced microaggressions with teachers?” The result was 42% of the respondents said yes. Another question was “Do you feel like it’s hard to live in Vermont because of its lack of diversity?” Half of respondents said yes.

Rep. Michelle Bos-Lun, D-Westminster, was in attendance during the Zoom meeting. She emphasized that housing is a key area in which people of color feel disadvantaged.

“Housing is an opportunity that can really provide movement forward in this society in a whole variety of different ways,” Bos-Lun said. “And if that’s not available to people of color, that’s putting them at a really unfair disadvantage.”

She gave multiple examples of leadership in Vermont using race as a determiner for the distribution of available housing. “There are some targeted funds that are going to correct that particular issue and I’m really glad and proud of that work,” she said.

Bos-Lun suggested that the spread of COVID also illustrates evidence of social inequality — and so the vaccines needed to be distributed to minorities first.

“We did have higher rates of COVID in our BIPOC populations than in white populations, and one of the things that happened on the state-wide level is that there were clinics set up so that BIPOC Vermonters could have access to immunizations sooner.”

High school student Emily Maikoo spoke at the presentation about her role in the report, which was more than a year in the making.

“Vermont still faces the same problems as everywhere else and in some cases it’s even worse,” she said. “As we’ve seen in the past, history always finds a way of repeating itself.”

Maikoo said that she’s discouraged from seeing incidents with police and minorities on TV and added that she hears racial slurs in her classrooms.

“And if I get pulled over, I have to worry about my life while others may just be getting a ticket,” she said.

Addie Lentzner, a freshman at Middlebury College, also worked on this report. She said police bias often begins once a stop is made.

“When they see that it’s a person of color, they may be more likely to do one of those things [search the car, make an arrest, etc.],” Lentzner said. “And this is just a bias that all of us have and we’re all human, we all have that bias, and police officers aren’t immune to that bias.”

The Vermont Racial Equity Report can be read online here.