President Joe Biden’s nominee for a top regulatory post within the Treasury Department has been heavily criticized after reports of her alleged Marxist ties and policies to overhaul the banking industry were made public, raising concerns among bipartisan senators.

Saule Omarova, a Cornell Law School professor and current nominee for the Office of the Comptroller of the Currency, has been recently criticized for her past writings on Marxism, which called for an overhaul of America’s current banking industry and advocating for extreme regulation policies within the Federal Reserve. 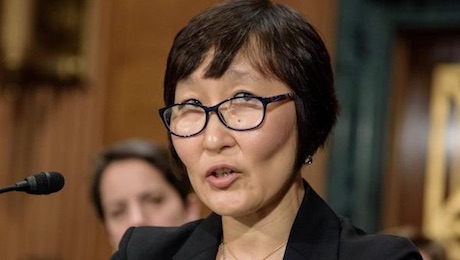 Saule Omarova, Biden’s indicated choice to lead the Office of the Comptroller of the Currency within the Treasury Department

Omarova, who was born in the Soviet Union and graduated from Moscow State University in 1989, praised the now-defunct socialist government for its lack of a “gender pay gap” in 2019.

“Until I came to the US, I couldn’t imagine that things like gender pay gap still existed in today’s world,” Omarova wrote in a tweet in 2019. “Say what you will about old USSR, there was no gender pay gap there. Markets don’t always ‘know best.’”

Omarova was also quoted in a 2019 Canadian documentary where she called the financial services sector an “asshole industry.”

“The financial services industry, in my view, and I don’t think I’m alone here, is the quintessential asshole industry,” Omarova said in the documentary titled“Assholes: A Theory.”

While attending Moscow State University on the “V.I. Lenin Personal Academic Scholarship,” Omarova reportedly wrote a thesis on Marxism titled “Karl Marx’s Economic Analysis and the Theory of Revolution,” the Daily Caller News Foundation reported.  Republican Pennsylvania  Sen. Pat Toomey, ranking member of the Senate Banking Committee, sent a letter to Omarova demanding her to turn over the thesis by Oct. 13, which she has still yet to do.

In the book titled “The Seven Sins of Wall Street: Big Banks, Their Washington Lackeys, and the Next Financial Crisis,” Omarova was quoted praising Marxism, saying how it altered her world views.

“Within the first year, my world changed,” Omarova said. “I became disillusioned with official Soviet ideology because of Karl Marx,” Omarova said in the book.

“I was in the Soviet Union, where there was no academic freedom, and this was a mandatory assigned topic. What I wrote in that paper has nothing to do with what I believe in now,” Omarova told the Financial Times during an interview.

In an October 2020 paper titled “The People’s Ledger,” Omarova outlined a plan for “reshaping the basic architecture and dynamics of modern finance” that will “‘end banking,’ as we know it.”

Omarova’s proposal argues for a “systematic democratization of finance” and seeks a system where American citizens have government bank accounts with the Federal Reserve that would “fully replace—rather than compete with—private bank deposits.”

She also advocated for a “digital dollar,” the “concurrent migration of all transaction deposit accounts from private banks to the Federal Reserve.” Omarova also approved of new policies that would allow “helicopter drops” of money into bank accounts to improve welfare redistribution and allow the federal government advice on price control and interest rates.

Senate Democrats have also voiced their concern for Omarova’s nomination. Montana Democratic Sen. Jon Tester said he had “concerns” for the nominee after outlining her policies in The People’s Ledger, Politico reported.

“What’s shocking to me is the notion that a person nominated for a very high position in our government shouldn’t be accountable for the things they have advocated for in writing themselves,” Toomey said in a Senate hearing on Oct. 7. He added that he had never “seen a more radical choice for any regulatory spot in our federal government.”

Republican Montana Sen. Steve Daines told the Daily Caller News Foundation that Omarova’s policies disqualify her from the nomination and asked Tester to pull his support.

“Biden’s pick for the nation’s top banking regulator proves just how far left this Administration is willing to go. Omarova’s radical past and support of communist ideals is incredibly troubling,” Daines told the DCNF. “She is clearly out of step with Montana, and I hope the senior Senator from Montana will also oppose her nomination.”

Omarova’s defenders accused Toomey of a “red scare McCarthyism” campaign because she is a woman of color and an immigrant, according to the Huffington Post.

“Before today, I thought red scare McCarthyism was rightly relegated to the dustbin of history,” Democratic Ohio Sen. Sherrod Brown said in a statement on Oct. 6. “Any American citizen who fled communist repression— whether it be FDIC Chair Jelena McWilliams or OCC nominee Saule Omarova — should be lauded for their courage and conviction.”

“They’re doing that because she’s a woman, an immigrant and she’s a woman of color,” Tracey Lewis, senior climate financial advisor at the consumer watchdog nonprofit Public Citizen said, according to the Huffington Post.

Before becoming a law professor, Omarova practiced law in the financial institutions group of the New York law firm Davis, Polk & Wardwell, specializing in corporate transactions and financial regulation, according to the Cornell Law website. She served at the U.S. Department of Treasury under former President George W. Bush as a special advisor for regulatory policy.

3 thoughts on “Has Joe Biden really nominated a Marxist to regulate our banks?”