The champion of Vermont’s LGBT movement for her status as the first major party transgender gubernatorial candidate in the nation is now throwing her hat into the systemic racism debate.

Christine Hallquist jumped into the issue of alleged racism in Vermont earlier this month when she wrote a commentary comparing her experience transitioning from Dave Hallquist to Christine to the experience some minorities supposedly face in the Green Mountain State. 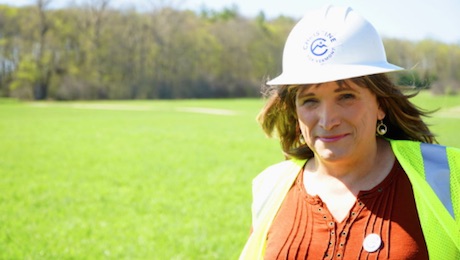 “I have spent a lot of time over the past weeks and months talking to Vermonters and sharing my story of how Vermont accepted and welcomed me after I transitioned. However, recent events and conversations have made me keenly aware of how far Vermont still has to go to be a welcoming place for all,” Hallquist said in her statement.

Among the events cited as proof of racial tensions include Muslim Girls Making Change performing “slam poetry on the bias and bigotry they face on a regular basis here in Vermont.” She also cited state Rep. Kiah Morris, who resigned suddenly last month while claiming she was the target of race-based threats.

In many cases, the alleged incidents of racism and threats around the state remain unsubstantiated. After conducting a thorough investigation of alleged threats made against Morris, police in Bennington said they did not find enough evidence to charge anyone with a crime.

“All of the complaints filed by Representative Morris and her husband James have been investigated appropriately and efficiently,” police chief Paul Doucette said. “… I didn’t feel there was sufficient evidence to charge anyone with a crime.”

As for the poetry group Muslim Girls Making Change, its members have been receiving awards, accolades and performance opportunities for their work and ethnicity since they formed in 2015.

Hallquist nonetheless expressed shame over the social climate of Vermont.

“That Vermont has allowed continued harassment of and threat to Vermonters of color makes me feel ashamed,” she wrote. “We can do better, but we must recognize that the Vermont we celebrate as welcoming and kind, is often only that if you are white.”

She added that she doesn’t have specific solutions to combat “embedded and structural racism,” and said society can no longer “address these issues with just thoughts and prayers … it will take action.”

This past year Vermont lawmakers advanced legislation to deal with racism at the state level. After an initial veto, Gov. Phil Scott signed a revised bill that sets up a Racial Equity Advisory Panel and a cabinet-level Executive Director of Racial Equity that are tasked with countering alleged racism in state institutions.

Sen. Randy Brock, R-Franklin, was one of two African American state senators to vote against the original racism bill, S.281. He told True North Reports it surprised him to hear Hallquist claim that racism may have been a deciding factor in her run for office.

“The fact that there are some people who are racist goes without saying. … [But] It is certainly not something that is so prevailing,” Brock said. “My sense is that if Christine is saying what she’s saying, it’s overblown.”

Brock, who has served in many public roles in state government, reflected on his own experiences in Vermont and at the Statehouse.

“African Americans represent about 1.3 percent of the population [in Vermont], and if I count the fact that there were two of us in the Senate in the last session, myself and Senator [Francis] Brooks from Washington County, we represent 6 percent of the Senate,” he said.

Brock noted that civil rights icon Martin Luther King, Jr. called for people to be judged by the content of their character and not the color of their skin.

“I am concerned that there are some who are moving towards a society composed of individual small groups of people who differentiate themselves from the rest of society. I don’t think that’s at all healthy,” he said. “Vermont is strengthened less by diversity and more by inclusion.”

Rep. Valerie Stuart, D-Brattleboro, has a different view. She said she used to live with Morris and believes Morris experienced racism, stalking and other negative bias. She told True North she strongly supports Hallquist’s push for social justice and equality.

“We just have to end this scourge on people of color and our people who are different in any way, whether it’s transgender or gay or whatever,” she said. “We just need to become a color- and gender-neutral society I think, and until we do we will not be a healthy society.”

16 thoughts on “Hallquist wades into racism debate in Vermont”