Attendees at Saturday’s Rally to Support Law Enforcement could hardly fail to notice the squad of camera-wielding friends of the rally disrupters, circling the gathering and looking for … what?

As it turns out, they were looking to record racist comments, to promptly post on social media and bring to the attention of other media. Apparently it’s too hard to find real-life expressions of racism in Vermont, despite the state being supposedly riddled with white supremacists and systemic racism.

How frustrating for them.

So here’s what they do. A crowd of them — including wearing threatening Antifa riot gear — descend en masse on a quiet, peaceful, permitted gathering of mostly middle-aged and elderly people sitting in lawn chairs. They shout down everyone. They announce that police and their supporters are racist. They wave signs that say you-know-what the police. They rip signs out of elderly ladies’ hands. They generally confront and provoke as much as possible without actually drawing police intervention. 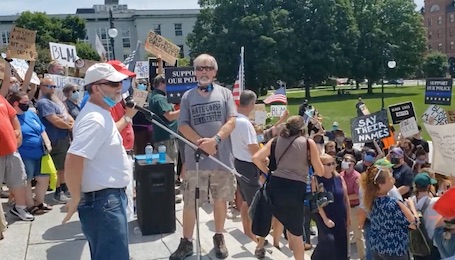 At the pro-police rally held Saturday at the State House, anti-police disrupters arrived and started yelling, screaming and turning on sirens while rallyers tried to observe a moment of silence for fallen police officers.

And, they wait for The Moment. The young folks with cameras and smart phones are circling, circling, looking for that one encounter that will make the whole trip worthwhile. Apparently at least one person obliged with an angry statement in response to — well, we don’t know what it was in response to. The post conveniently doesn’t record whatever the disrupter said. (For that matter it’s not impossible that the rally attendee who claimed blacks have been especially well treated in the USA was a “plant.” At least I didn’t recognize her.)

Their policy of provocation is cold-blooded, cynical and deceptive. Get some unprepared schlub to blurt out statements on camera, convince the public that everyone who supports the police is just like this Bad Guy, and create division. It’s a ploy to sell the idea that society is irredeemably racist and, starting with police, must be abolished and rebuilt from the bottom up. Down with the Bill of Rights, individual determination, the Constitution, capitalism. Up with socialism, which has always needed an evil, oppressive “Them” to justify denying rights and seizing power. For the National Socialists in the 1930’s, the target was the Jews. For today’s Marxist Socialists, it’s the police — and the law-based, capitalist society they protect. And, last Saturday in Montpelier, the startled attendees of a peaceful rally to honor the Blue.

At least in the short term it’s an effective strategy. When asked at today’s press conference, Gov. Scott showed that his view Saturday’s event were influenced by the viral post, which he noted has gone across the country. “I would hope that the rest of the country doesn’t believe that we are represented by the woman on the video,” he said.

As a follow-up, Vermont Daily asked: “Governor, I heard your comments about Saturday’s rally. Are you also concerned when anti-police protesters — some dressed in threatening Antifa riot gear — disrupt a peaceful, permitted gathering of people sitting in lawn chairs. They shout down everyone so that no speakers can be heard. They yell that police and their supporters are racist. They wave signs that say you-know-what the police. They rip signs out of elderly ladies’ hands. I think you and I and most others are for racial equity, but do these tactics concern you?”

Gov. Scott replied: “Yeah, obviously … I’ve been a promoter of respect and listening to each other. Racism is on center stage. We should listen.” He added that he is “a promoter of law enforcement” and does not support defunding police.

But what’s a police-supporting American without press credentials to do? In my humble opinion, when Antifa or BLM is screaming in your face, you turn the other cheek. Don’t give them the satisfaction. Or the photo op.

Also, use social media and letters to traditional media to dispute their narrative. For example, some media called the disrupters “counter-protesters.” Yet there were no protesters for them to counter. There were only people thankfully celebrating the good work of Vermont law enforcement, at least until (maybe) a few felt sufficiently provoked to protest their conduct.

Cameras don’t have politics. You point, you shoot, it works. Vermont Daily (see YouTube video) caught the disrupters jeering when a local pastor asked for a moment of silence to honor fallen police officers.

We figured WCAX ought to know about it, and sent the following email this morning:

“As a rally attendee, it’s clear to me that the anti-police disrupters were looking, hard, for expressions of anger, to be caught on video — they had at least half a dozen people walking around doing nothing but shooting photos. This is so sad — some good people showed up to calmly, peacefully honor police — only to be targeted as racists by a disruptive crowd.

“If you do a follow-up to your social media piece that aired this morning, you might want to include this clip — which shows the disrupters yelling, screaming and turning on sirens while rallyers tried to observe a moment of silence for fallen police officers. This happened immediately after everyone, at the request of rally speaker Pastor Gordon Wells of Barre, JOINED TOGETHER in observing a respectful moment of silence for George Floyd. It was really beautiful. But when Pastor Wells asked that a similar moment of silence be observed for fallen police officers — immediately they resumed their cacaphony.

Will WCAX pick up on this side of the story? FYI their website says comments and newstips can be emailed to news@wcax.com. You have Vermont Daily’s permission to send them the video, and to share it online.

14 thoughts on “Guy Page: When disrupters attack pro-police rally on social media, what can you do?”