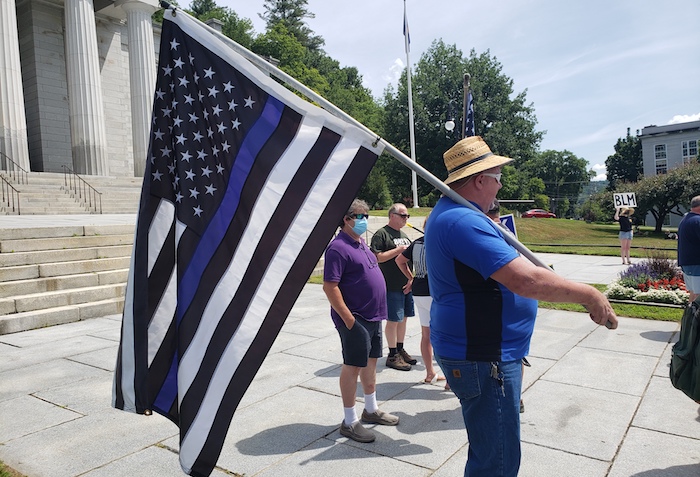 Vermonters came out to the Vermont State House to show their support for police on Saturday, July 24, 2020.

At Saturday’s Rally to Support Law Enforcement at the Vermont State House, many heartfelt words and stirring stories honoring the men and women of Vermont law enforcement were seemingly lost in the shouting, chanting and bullhorns of anti-police counter-protesters. Rather than curse the darkness, Vermont Daily today publishes several tributes and videos that light a candle of appreciation for Vermont’s Thin Blue Line — and also shed light on the disrupters’ apparent hatred of police.

Saturday’s event wasn’t about the rally organizer, Jim Sexton of Essex Junction — as he will be first to admit. Nor was it about the determined tribute readers including Jessica Worn, Pat McDonald and Steve Stringer, sound system provider and operator Richard Haverick, or awesome National Anthem and “God Bless America” singer Bill Lynch of Hyde Park. And it certainly wasn’t about the attention-seeking antics of the anti-cop protesters.

It was about honoring the Vermont men and women who wear the blue, who protect and serve, who keep the law and order without which families are not safe, businesses cannot thrive, and individuals cannot achieve their dreams. The law and order on which the American Dream depends are hateful to the disruption currently in vogue. It insists that “privileged” Americans share in the fear of violence, it despises American capitalism, and it rejects any dream that dares to rival anarchy and socialism.

In fact, police supporters at the rally may actually have reason to thank the disrupters. Had they not partially frustrated speakers’ efforts to be easily heard by the several hundred of police supporters on the lawn, it’s unlikely anyone would have published the testimonies below about the Blue of the Green Mountain State. So to the flock of foul-mouthed, inconsiderate Antifa wannabees who trampled on others’ exercise of their right to free speech, thanks.

Nor is it likely Vermont Daily would have captured their single-minded hatred of police in the following revealing video. As the anti-cop disrupters were chanting and yelling so that no one else could be heard, Barre pastor Gordon Wells went to the microphone. He urged everyone to take a moment of silence for George Floyd, victim of injustice. Somewhat to my surprise everyone — even the well-orchestrated mob — went silent. It was beautiful. But when Pastor Wells then asked for everyone to take a moment of silence for fallen police officers, see video what happened:

Bucking the trend of prosecutors more interested in investigating police than the crime the police are sworn to stop, Vermont has a federal prosecutor who “gets it.” In May, 2019, during National Police Week, U.S. Attorney for Vermont Christina Nolan stated:

“As the United States Attorney for the District of Vermont, I want to acknowledge the work performed by federal, state and local law enforcement, who often face uncertain and dangerous situations without question and without expectation of thanks.  We want them to know they have our unwavering support and appreciation.

We are so very fortunate to live in the Green Mountain State.  Vermont is an extraordinarily attractive place to reside, and that is due, in no small part, to the tireless efforts of officers at all levels of law enforcement to keep us safe.  Quietly and consistently, they put themselves in harm’s way to protect their communities.  They make decisions every day to stand on the front lines of our campaigns to combat violence, unlawful firearms activity, drug trafficking, and other dangerous crime.

This is a tremendous daily sacrifice — on the part of officers, to be sure — but also on the part of their families and loved ones, who support them and hope for their safe return home each day.  We must never take for granted their sacrifices and their heroic work.”

For a comprehensive video account of the rally, see video below by Steve Thurston, a police supporter from Addison County.