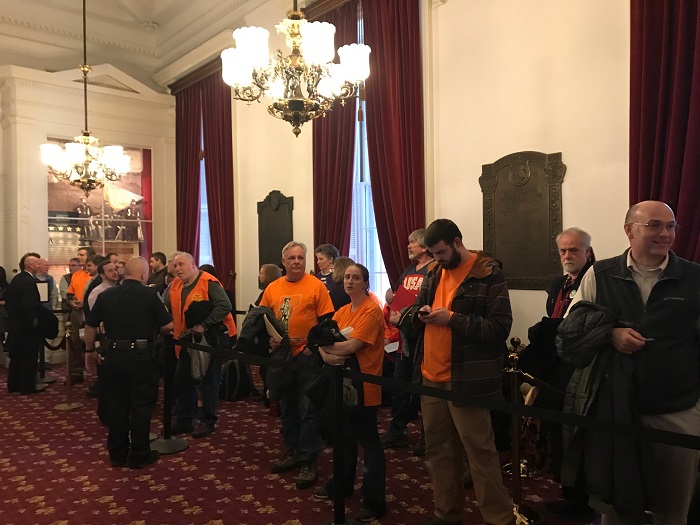 DEFENDING THE SECOND AMENDMENT: More than a hundred gun-rights supporters and dozens of gun-control advocates gathered at the Statehouse on Tuesday to express their views on the latest gun-control proposals.

MONTPELIER — An already controversial gun bill now states that bystanders who are present with a person with a restraining order could face jail time if they don’t help police with gun confiscations.

H.610 specifies that anyone with a relief from abuse order must surrender guns for the duration of the order. The bill also seeks to expand the waiting period to purchase a gun so that background checks can be completed before a person takes possession of the firearm — a move aimed at closing the so-called Charleston loophole.

On Tuesday, as members of the public gathered at the Statehouse to testify before the House Judiciary Committee regarding the measure, Bill Moore, firearms policy analyst for the Vermont Traditions Coalition, sent a warning letter to pro-gun colleagues about new changes in the bill.

“The most recent version of the Bill now makes it a crime punishable by two years to ‘refuse to obey instructions from a law enforcement officer to ensure the safe removal of firearms or to protect the safety of the officer or other persons present’ and also instructs that the violation may be charged to ‘a person present at a location during the lawful search,'” he wrote.

The letter continues that the crime would be a felony punishable by up to two years’ imprisonment.

Moore’s alert questioned how a bystander present with another person targeted by police could be held responsible simply for being “a person present at a location.”

“Are we suddenly subjected to frontier justice that judges all who do nothing as accomplices to a crime?” Moore wrote.

At the public hearing Tuesday, the House chamber filled up with orange as Second Amendment advocates wearing orange vests began dropping in to voice their opinions. Although not as numerous, gun control advocates also were present.

Applause broke out when Republican gubernatorial candidate John Klar stepped to the microphone to express his opposition to the bill. In particular, he said the federally mandated waiting period of three days while purchasing a gun would supersede a state law requiring a 30-day waiting period. He also said long waiting periods could put some Vermonters in danger, such as when a person needs to buy a gun quickly for self-defense purposes.

“I’m sure that [Reps.] Maxine Grad and Martin LaLonde who are attorneys on this committee would have noticed that,” Klar said. “And yet Maxine Grad and Mr. LaLonde, you have sat here and you’ve looked at this bill, and as lawyers you could not defend this in 100 years.”

Birgit Matthiesen, of Burlington, was among the first to testify in favor of H.610. She said while she has been a victim of domestic abuse, she supports the bill.

“I am the child of a family of domestic violence and I’m a survivor. I have seen and I have felt the red-hot rage of the moment of violence,” she said.

She said H.610 would remove guns from volatile situations when a potential victim is at the highest level of risk.

16 thoughts on “Gun bill gets new provision as pro-, anti-gunners speak out”