Cengeri, a former VPR newsman, had subbed for Gram in August while the latter was on vacation. When the show opened this morning, he offered no explanation for Gram’s absence nor for the show’s new name. Ever the reporter, Gram — 31 years with the Associated Press and almost three years with WDEV — announced the news on his Facebook page yesterday with the following: 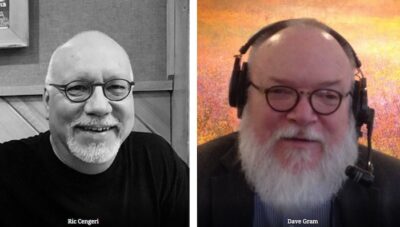 “WDEV and I have parted company. I was told after Friday’s show that Friday’s was my last show. When I asked why, I was told that management wants to ‘head in a different direction.’

“My only regret about the timing is that I didn’t have a chance to offer my heartfelt thanks to the guests, listeners and callers who made the show for me and, I hope, for most others involved a worthwhile endeavor. I thank WDEV for the opportunity.

“I have taken some risks on the show, and had thought for some time that one day I might take one risk too many.

“As for this decision, I will not call it fraud or corruption. I certainly won’t call it ‘fake news.’

“Instead I’ll acknowledge when key parts of my constituency decide they want to try something or someone else, and be on my way.”

If Gram doesn’t know why he was let go, successor Cengeri can sympathize — that describes his October, 2019 termination at Vermont Public Radio.  He was given the bad news unawares in the station parking lot after returning from vacation. “It was a surprise. It was definitely a surprise,” Cengeri told Seven Days. “There was no warning that there was anything amiss.”

Many friends and listeners left sympathetic messages on Gram’s Facebook page. Vermont’s political class was well-represented. “Wow. I am so sorry,” said former Montpelier Mayor and Democratic Rep. Mary Hooper. “I thoroughly enjoyed your show and integrity. Our loss, as well as yours.” Added Democratic party leader Maggie Lenz of Montpelier: Nooo!! Your show is the best. Such a loss.” Floyd Nease, another former Democratic House member when Gram covered the Vermont State House, said “This makes me sad, Dave. Who’s puns will I groan at now?”

When Gram asked Vermont Daily editor Guy Page to spar with liberal pundit Kevin Ellis about the national and state elections in the final segment of Friday’s show, he gave no sign of knowing this would be his final edition of the Dave Gram Show. The show went as it often did — with Gram refereeing the liberal/conservative guests, occasionally interjecting his own thoughts.

Gram the radio host was certainly known for his groaners. Conservative listeners groaned about what some viewed as liberal-leaning comments and guest selection.

Like Gram himself on many if not most days, some listeners couldn’t resist making the Trump connection. “I am guessing you are not on Trump’s list of pardons,” Dale Tillotson said tongue-in-cheek. “Of course I predict he will resign on December 24 giving Pence short of a month to pardon Trump and associates in advance of them being charged.”

Before spending 12 years at VPR, Cengeri worked in public relations and marketing and as an on-air personality at the Point FM.

The pandemic has put Vermont media in flux, even a longtime, independent stalwart like WDEV. Advertising revenue is way down. Appeals for community donations are up — never a good sign for any for-profit media. Vermont media managers and owners face potential disaster if the pandemic continues and/or if a severe economic downturn is in Vermont’s near future. Was Gram’s departure a financial decision? A judgment on his transition from print reporter to on-air personality? Only the principals know for sure.

6 thoughts on “Gram out, Cengeri in as WDEV morning talk host”