On Election Day last Tuesday, Art Peterson of Clarendon proved that a determined challenger can defeat an established Democratic incumbent, without any help from Facebook.

Seven days ago Peterson was a first-time Republican candidate for the Democrat/Progressive controlled Legislature. The outspoken conservative activist was trying unseat a longtime, entrenched Democrat. Making that tough job harder was a mysterious, unexplained October 16 blackout of his Facebook account.

Nevertheless, he won. He and leading Rutland-2 district vote-getter incumbent Republican Tom Burditt unseated Democrat Dave Potter, who had served since 2005. Peterson is among the net-gain of four Republican votes that ended the Democrat/Progressive supermajority. This coming year, the Dem/Progs will need absolute, first-vote fealty and at least one independent to override a veto by Gov. Phil Scott. 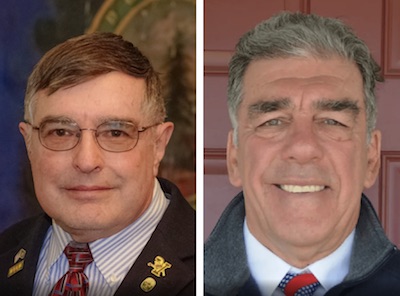 Potter, a soft-spoken, retired Rutland schoolteacher, co-sponsored controversial legislation like the Global Warming Solutions Act, changes to Act 250, and the plastic bag ban. Still, it would not be fair to label Potter as a legislator of all-things-liberal – for example, he joined the mostly-Republican vote against S54, the retail marijuana law. Yet on June 19 he voted for HR 21, which rebuked both President Trump and Vermont for racial injustice at the height of the nationwide George Floyd-BLM protests.

For whatever reason(s), West Rutland, Clarendon, Wallingford and Proctor voters gave the Vermont Legislature seat to Peterson. It may not be coincidental that Clarendon and West Rutland were among the eight Rutland County towns to vote for President Donald Trump.

Peterson has been in the thick of things on the local level.

In October 2019, the Town of Clarendon became the second Vermont town to ban the retail sale of marijuana. It was a pre-emptive move in the event the Legislature approved retail pot (which it did this spring). Months earlier, as a citizen activist, Peterson researched anti-retail pot legislation for the selectboard.

This July, Peterson helped secure 500 citizen signatures on a petition opposing Mill River school district support for flying the Black Lives Matter flag. He was quoted thus in the Rutland Herald: “The Black Lives Matter flag is a symbol of an organization with Marxist roots, it’s a symbol of an organization that’s continually involved with violence, and when we put that flag on that flag pole we are telling the world we agree with them….And I don’t think the majority of the tax payers of this community agree with it any more than they would agree with a Nazi flag hanging on that flag pole, it’s about the same thing to me. We don’t need to politicize and sexualize our children’s education, and I feel very strongly that’s what we’re doing here.”

Peterson received plenty of local, state and national attention (see episode of the Todd Starnes show) for the BLM flag petition, both pro and con. He recently emailed to Vermont Daily: My opposition to ANY flags on school flag poles came about because I feel it is absolutely wrong to politicize the education of our children. My opposition to legalizing marijuana is because I see it as a health and safety issue which will have long term negative societal consequences, the position taken by both medical and law enforcement experts. Whether or not it helped me or hurt me at the polls I have no feel for; I will call them as I see them. At the very least the voters know EXACTLY how I feel.”

Without warning, Peterson’s Facebook page was dropped on October 16. It reappeared briefly in Vermont Daily’s newsfeed this morning with a post saying “Back From The Dead!” but Vermont Daily was unable to locate it a second time. (This is no doubt due to our own cyber-unsavviness.)

On October 16 Vermont Daily received this email from Peterson: “I thought I would let you know this. Tuesday morning my account was disabled, no reason given, no message, no email. Nothing. I didn’t know if any other conservative voices in the state had experienced the same thing.” On November 5 he wrote, “As far as I know my Facebook account is still disabled. I have received no communication from Facebook as to why it was disabled or any time frame for when it will be re-activated. Congressman Peter Welch’s office has been in contact with me about it with no resolution to date.”

With or without Facebook, Art Peterson seems to have a knack of making his views known. State House, here he comes.