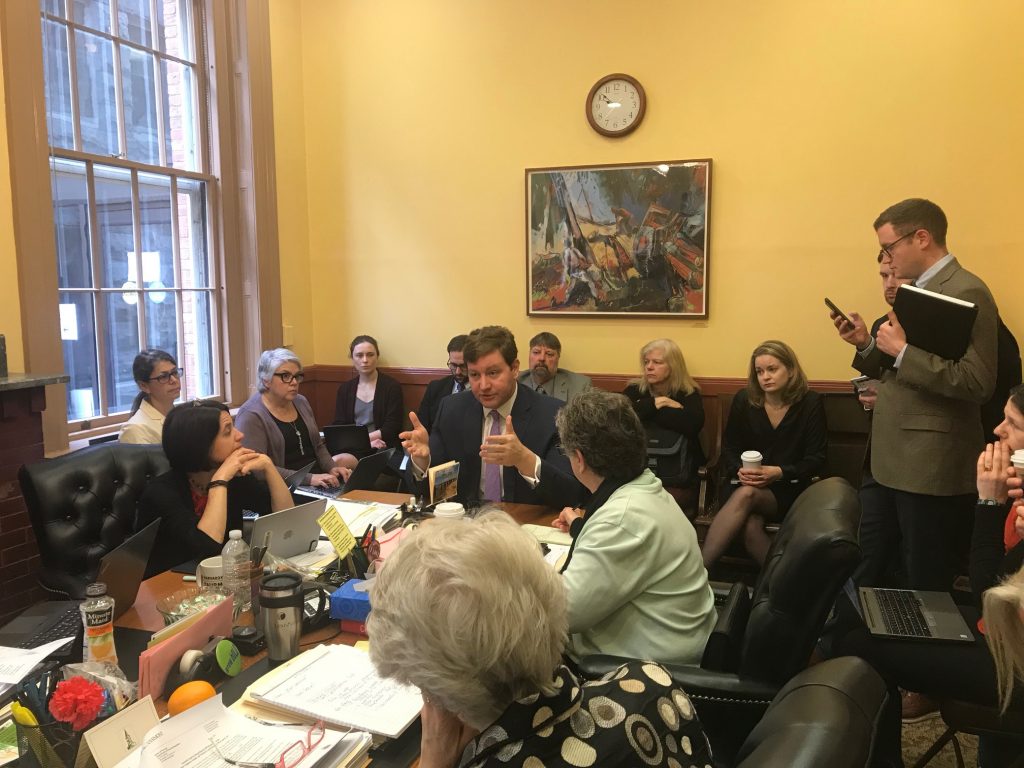 A LONG SHOT – Michael Pieciak, Commissioner, Department of Financial Regulation, explains the ins and outs of the governor’s proposal for a voluntary family leave program which is not popular with many liberal politicians who want a mandatory program.

MONTPELIER — The Senate Committee on Economic Development, Housing, and General Affairs spent Thursday morning going over the two paid leave programs competing for approval in Vermont, and expressing a preference for the one that requires new taxes.

The plan senators seem to like better is H.107, mandatory universal paid leave. This bill would require at least $70 million in new payroll taxes to be collected from employees, although there have been proposals this session to have employers share at least some of that cost.

“We’re still trying to get the details of a comparison of the two plans, primarily the participation rate. And part of the reason we’ve talked about this today is there’s a new memo out by an in-house actuary explaining what they saw in the RFIs (request for information),” committee Chair Sen. Michael Sirotkin, D-Chittenden, told True North.

The other proposal, introduced by Gov. Phil Scott at the start of the legislative session, would be a mandatory program only for state employees, and the rest of the Vermont business community could opt-in or opt-out at their own discretion.

The latter was introduced as a bi-state program with New Hampshire, bringing its 10,000 state employees along with Vermont’s 8,500 to create a larger pool to draw funds from. That state’s business community could voluntarily participate as well.

Scott has indicated that he will sign off on a paid family leave program only if it’s not another mandatory program burdening Vermont’s already high-taxed workforce. He continues to favor the voluntary proposal crafted with New Hampshire.

Last year Scott vetoed a mandatory paid leave bill. This year the governor no longer has a veto-proof minority voting bloc in either Statehouse chamber, meaning he needs at least some moderate Democrats to cross party lines if he’s going to issue a veto and have it sustained.

Earlier in the month, the House passed H.107 by a 92-52 vote, meaning the one-third support required to sustain a veto appears to exist by a slim margin.

Sirotkin did not seem to think a voluntary plan would work.

“We’re still very much interested in a mandatory plan,” he said. “The general feeling in the legislature is that the takeup rate would be quite small and that [the voluntary plan] would lead to higher costs and less coverage.”

Michael Pieciak, commissioner of the Department of Financial Regulation, explained what he learned from the RFIs, which were sent out to private insurance providers such as MetLife and others.

One suggestion was that the insurance carriers prefer group participation over piecemeal participation. He suggested that companies which commit all their employees should get the same premium rates as the state employees.

Other committee members were likewise skeptical about the governor’s two-state plan.

Sen. Alison Clarkson, D-Windsor, asked if the program is feasible considering that it was largely conceptualized on the assumption that New Hampshire would support it.

“New Hampshire doesn’t look like they are very enthusiastic about a voluntary program either, and their legislature is moving in a direction similar to ours,” she said.

She asked Pieciak what would happen if New Hampshire rejected the voluntary plan and passed its own mandatory plan.

“Can you possibly move forward?” she said.

Piaciak answered that the prospect of starting a program with only Vermont’s 8,500 state employees is not far-fetched from the original idea to go with just New Hampshire’s 10,000 state employees.

Damien Leonard, legislative counsel, also met with the committee. He reviewed some of the latest modifications to H.107.

H.107, as written, seeks to have private insurance companies administer the program, which should help mitigate the administrative burden on the state. The issue of who runs this program has been a sticking point for Vermont’s small business community.

Erin Sigrist, president of the Vermont Retail & Grocers Association, recently told the same committee that 90 percent of their members — if they supported a paid leave program at all — would prefer that it be run by a private existing insurance provider rather than another newly created government bureaucracy.

There is now some language in the bill that addresses what happens if the state can’t get a good partnership going with a private insurer.

Leonard said that in such a case lawmakers would probably then have to scramble a bit early next year’s session to quickly produce legislation to slow down the process, by at least two years. This would allow time for a state-run administration to formulate.

He reminded it’s always easier if the private sector can handle this.

“They’ve got reserves for all their different products, and what we are paying for is essentially money to feed into that reserve to maintain their solvency,” he said.